MPs on Okinawa boost drunken-driving enforcement for the holidays 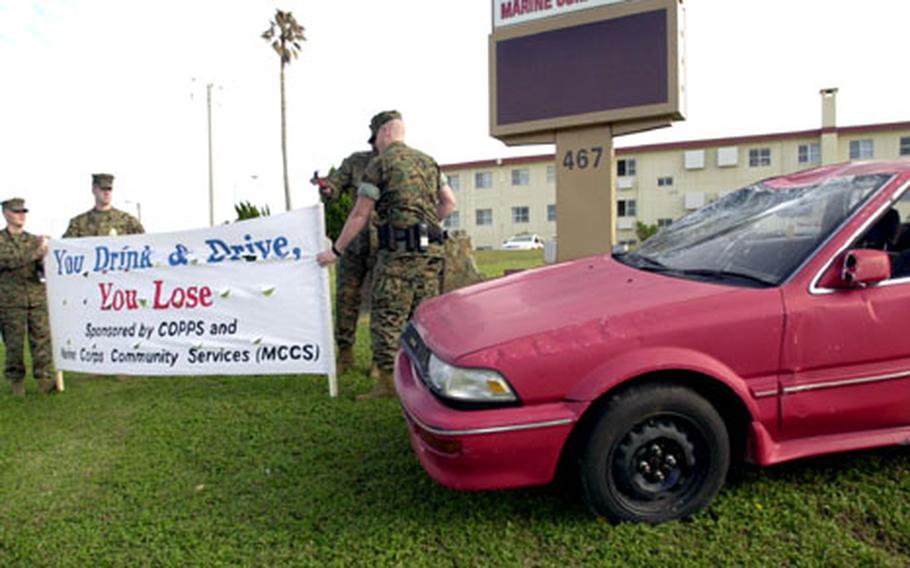 Marine Corps Military Police officers put up a sign next to a crashed vehicle on Camp Foster, Okinawa, warning about the dangers of drinking and driving. (Fred Zimmerman / S&S)

3D stands for &#8220;drunk and drugged driving,&#8221; and the joint service campaign is aimed at reducing alcohol and drug-related accidents during the holiday season. There will be random traffic checkpoints at base gates and other locations, and displays of signs, posters and wrecked cars will remind motorists not to drive while intoxicated.

At many of the checkpoints, he said, Marine, Air Force and Army MPs will be working together under the umbrella of the Council for Okinawa Protection and Police Services.

Beatty said the drunken-driving law in Japan is stricter than that of the United States. A blood alcohol content (BAC), reading of 0.03 is considered driving while impaired in Japan.

Beatty noted that in the United States an average of one alcohol-related fatality occurs every 30 minutes. According to the National Highway Traffic Safety Administration, 17,013 people were killed in accidents involving impaired drivers in 2003.

There were 50 alcohol or drug-related automobile mishaps involving Americans on Okinawa in 2003, according to military police.

On the bases, a person with a BAC of 0.05 is considered driving under the influence and 0.10 promotes them to a more serious driving-while-intoxicated level. In either case, the driver risks having his or her vehicle impounded, driving privileges revoked and possible disciplinary action.

Ultimately, the consequences could be worse for a military member.

But that&#8217;s not as bad as what can happen if the driver is not caught before he is involved in an accident, Beatty said.

If the driver is charged with driving under the influence in a Japanese court, he or she faces a maximum sentence of one year in jail and a $3,000 fine. The maximum sentence for driving while intoxicated is three years in prison and a $5,000 fine.

According to the prefectural police, Okinawa has more drunken- driving arrests per capita than any other prefecture in Japan.

He said many commands on the island have designated-=driver programs.

Besides the checkpoints, military police will give safety briefings to units and participate in the annual &#8220;Beating the Blues&#8221; presentations put on by Marine Corps Community Services during the holidays to combat depression. The campaign also will reach the base schools with a banner contest for children in kindergarten through sixth grade and an essay contest for students in the middle and high schools.

Recently, the Council for Okinawa Protection and Police Services monthly radio call-in show on American Forces Network focused on the 3D Campaign, and a short video on one of the commanders&#8217; channels on cable television dramatizes the lives affected by just one drunken-driving fatality.