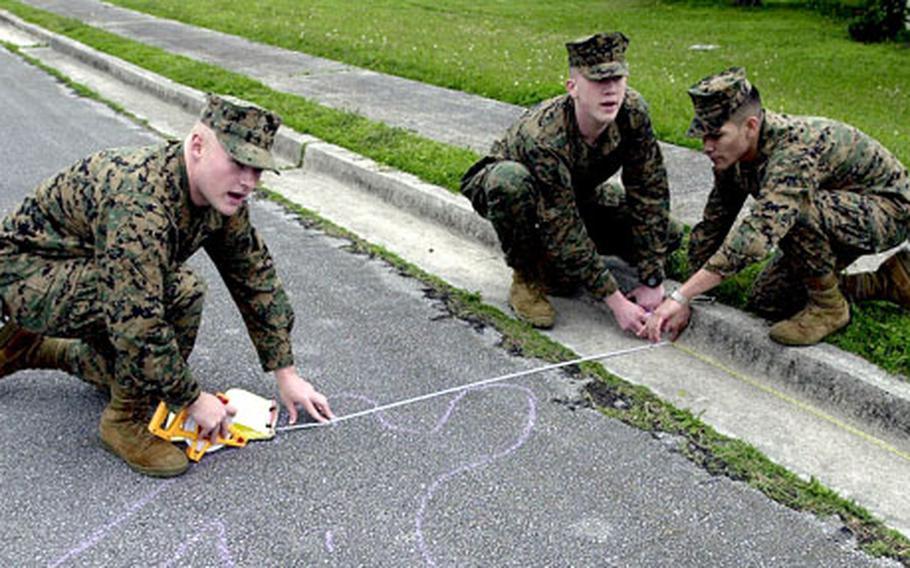 CAMP FOSTER, Okinawa &#8212; Military police officers have been busy lately, taking notes at the scene of daily vehicle crashes in the Futenma Housing area. Luckily, though, the crashes all were staged for the 25 students training to become certified accident investigators.

To avoid the expense of flying the students to the 17-day course at Lackland Air Force Base in San Antonio, the course and two instructors were brought to Okinawa.

Army Staff Sgt. David Kennedy and Air Force Staff Sgt. Kevin Lavalais, both instructors from the 342nd Training Squadron, said they conduct two to four classes &#8220;on the road&#8221; and between 15 and 17 at Lackland each year, training 300-450 accident investigators.

Kennedy added: &#8220;If you never go through the course, you just make assumptions. But as soon as you roll on scene, you have to look at all the factors.&#8221;

Lavalais said investigators use precise measurements and math to determine those facts.

During the training here, which wraps up Feb. 28, the students had to investigate four different crash scenes &#8212; two car vs. car scenes, motorcycle vs. car, and a car vs. pedestrian. Students had 90 minutes to complete their work on scene, including getting measurements, Kennedy said.

Cpl. Peter Harrell, an MP on Marine Corps Air Station Futenma, said the training taught him more about accident scenes than he ever thought about. He said being precise, down to the 100th of a calculation, is tough.

While the training has been more of a refresher course for Cpl. Justin Schnelbach, a Camp Foster MP who has been getting on-the-job training as an accident investigator, he said he&#8217;s glad to be going through the course so he can become &#8220;official.&#8221;