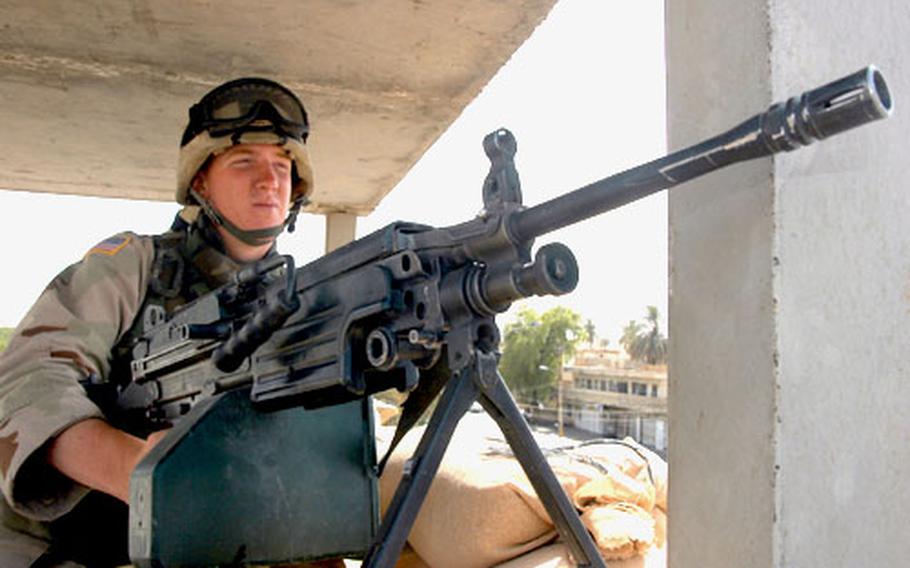 Pfc. Clinton Rope, 20, of Clarinda, Iowa, looks over a Baghdad neighborhood Sunday from atop an Iraqi police station. U.S. military police maintain security at the police station during daylight hours. However, after dark, the troops leave and the station often comes under attack. (Rick Scavetta / S&S)

Pfc. Clinton Rope, 20, of Clarinda, Iowa, looks over a Baghdad neighborhood Sunday from atop an Iraqi police station. U.S. military police maintain security at the police station during daylight hours. However, after dark, the troops leave and the station often comes under attack. (Rick Scavetta / S&S) 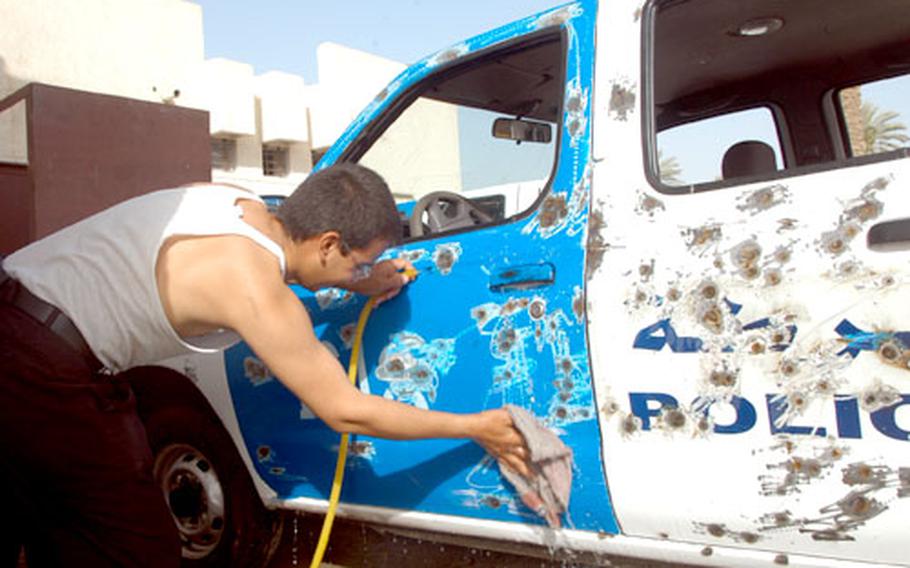 BAGHDAD &#8212; With only a sheet of cardboard for shade, Spc. Jamel Hawthorne sits atop a sun-scorched roof of an Iraqi police station.

But when night falls and the U.S. soldiers return to Camp Cuervo, the shooting starts, said Luaa Shukur, an Iraqi officer assigned to station. Rockets and bullets come from nearly every direction pummel the station, which is a few blocks from the Tigris River.

On Sunday, a local man with ties to the insurgents brought a warning. If troops did not withdraw from the station, insurgents threatened to kill every Iraqi officer assigned to it.

The surrounding neighborhood has its share of criminals, to include the &#8220;20th Street gang,&#8221; thugs from a nearby avenue, soldiers said. Except these adversaries often attack with a heavy arsenal.

Down below Hawthorne, Iraqi officers climb aboard a police-marked pickup truck riddled with AK-47 bullets. Surrounding buildings are scarred with bullet holes and blackened streaks from explosions. Suspicious-looking men watch the station from a small cafe nearby.

The station is a bastioned fortress in the often-volatile Adhamiya neighborhood. Concrete barriers topped with razor wire block the street out front. Soldiers man sandbagged bunkers in the compound, training their machine guns on windows and rooftops. Under the hot sun, their watch can be long and dull, soldiers said.

Staring out into the endless rows of tan-colored buildings, the guys chat to stay alert, they said.

Sometimes that talk about friends back home, wondering what they&#8217;re doing now as the soldiers pull their tour in Iraq.

Back in Heidelberg, Germany, the troops are assigned to the 529th Military Police Company, the honor guard for U.S. Army Europe commander Gen. B.B. Bell. When their headquarters, the Mannheim, Germany-based 95th Military Police Battalion, was deployed to Iraq four months ago, the platoon was attached to the 272nd MPs.

They arrived in Baghdad on April 12, just after a series of deadly clashes with radicals in Sadr City.

Now the company is doing its best to train and equip its Iraqi counterparts with hopes that Iraqi police take over security for their own people.

Keeping a presence at the Iraqi police stations is more than just guard duty. Marquiss&#8217; soldiers mentor the Iraqis to work professionally, he said. They cover basic police functions; apprehending suspects, conducting investigations and preparing cases for the court.

Helping build the Iraqi force is not without challenges.

Supplies for the Iraqi police are slow in coming. Finding interpreters also takes time. But many police now have uniforms, pistols and numbered badges. Some of their trucks are new Nissan pickups. Bulletproof vests slowly are being fielded.

Looking like police and having equipment brought up the Iraqi&#8217;s morale, Marquiss said.

In just a couple of months, Marquiss has witnessed a marked improvement, he said.

The military recently tripled the size of the company&#8217;s beat. They went from 11 sites near the city center to 31 stations in north and east Baghdad. With a limited number of MPs for such a large area, Marquiss is now seeing where his company can best focus its efforts, he said.

Marquiss wants his troops to learn their beat more by day before he assigns them to night operations, he said.

And their job is not to hunt down the insurgents. They leave that to the infantry patrols, which recently picked up a local gang leader, Marquiss said.

Back on the rooftop, soldiers may see an occasional head popping through a window. Sweat drips down their faces, catching dust and grime blown by the wind. They think about their lives, their families, their mission.