MPs cracking down on skid racing on public roads 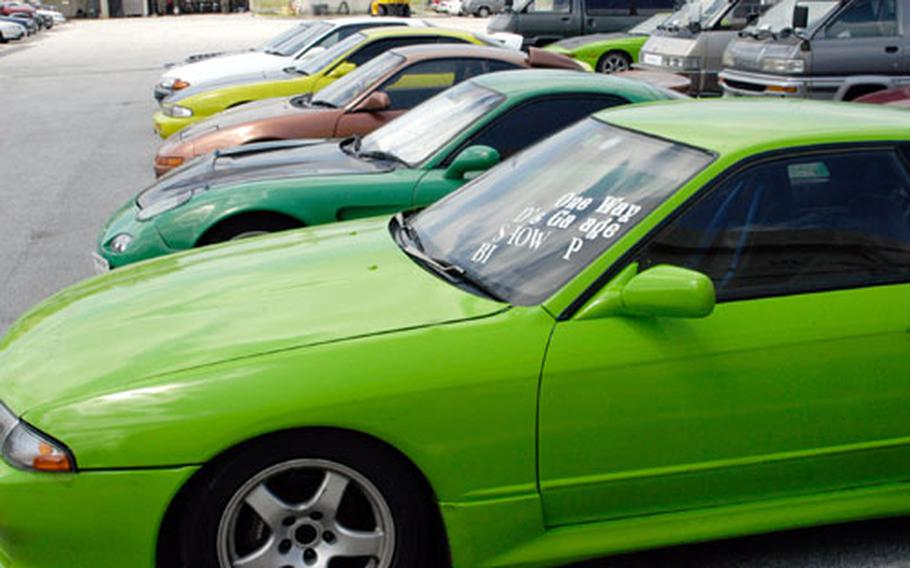 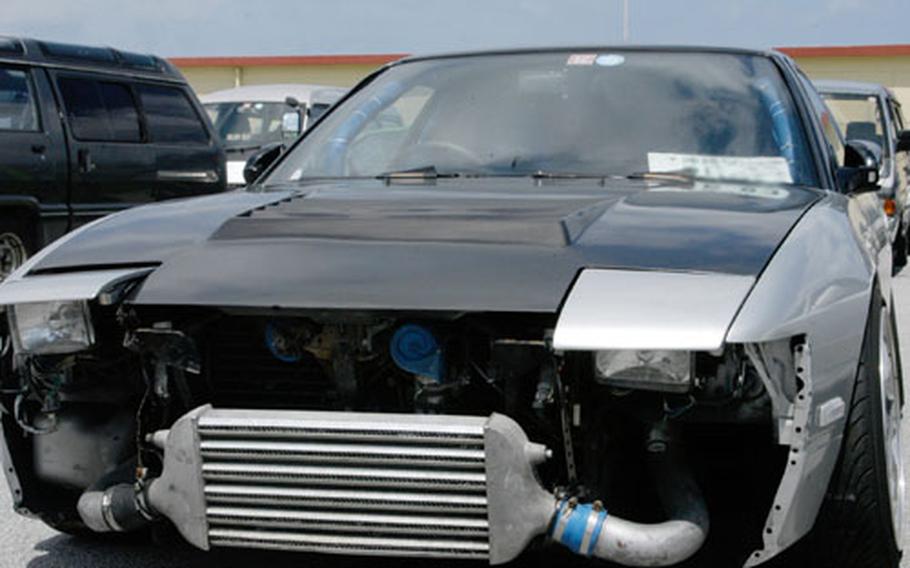 A car damaged while attempting to flee the scene of an illegal "drifting" gathering on Okinawa sits in the impound lot on Camp Kinser. (Mark Rankin / S&S) 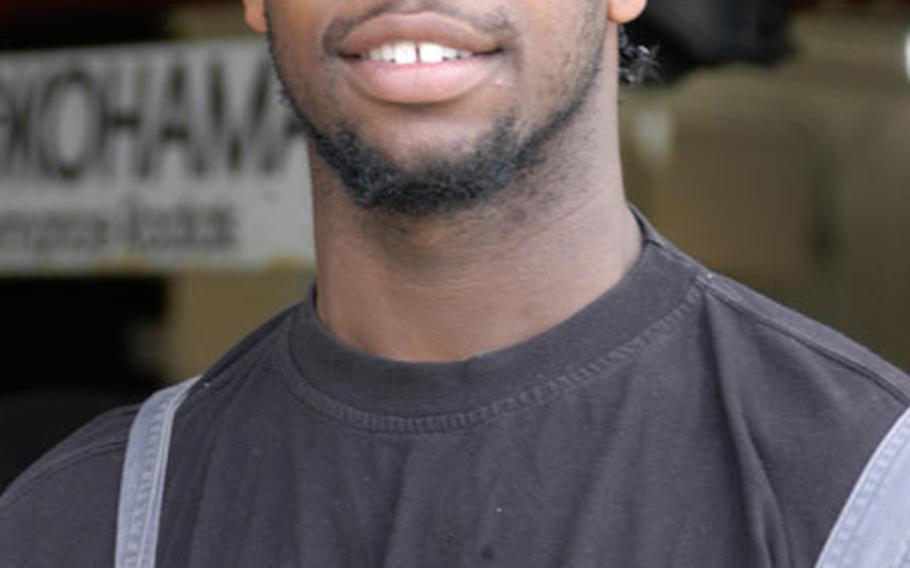 Kawan Pressey, a 20-year old mechanic on Okinawa, said American "drifters" are scared because of a Marine crackdown on the illegal street sport. (Mark Rankin / S&S)

Military police on Okinawa, however, call it reckless driving and have cracked down on the illegal street sport. A recent Marine Provost Marshal&#8217;s Office undercover operation resulted in tickets and impounding of some of the island&#8217;s flashiest cars.

But a recent visit to a seemingly deserted commercial district in the port area behind Camp Kinser demonstrated it has not died.

No other Americans were at the midnight gathering, but Japanese devotees of drifting continued tearing around corners, slipping perpendicular to the forward spin of the squealing tires in a controlled fishtail that seemed to balance on the verge of crash-and-burn.

U.S. military police say they will continue to crack down on status of forces agreement personnel who take part.

&#8220;It&#8217;s illegal to do on public roadways,&#8221; said a Marine master sergeant in charge of the undercover operation. He asked not to be identified because the investigation continues. &#8220;Basically, it&#8217;s pushing a vehicle past its normal limits at a high rate of speed and taking corners sideways. It&#8217;s meant to show a driver&#8217;s skill at keeping his vehicle under control.&#8221;

He said the Japanese sport quickly is becoming popular in the United States. And, although it&#8217;s become a legitimate competition at some racetracks, many speed sliders prefer public roads.

He said during a recent sting, undercover Marines videotaped cars owned by servicemembers and Defense Department civilians; later, they identified the drivers and registered owners, issued tickets and impounded the cars.

Under driving rules established for Marine bases on Okinawa, first-time offenders found guilty of reckless driving face license suspensions of up to six months. A second offense rates a year&#8217;s revocation &#8212; and after a second offense, all active-duty Marines face forfeiture of driving privileges for the remainder of their time on Okinawa.

The master sergeant said his team spent five nights observing the drifting in Irijima, an industrial park in the city of Urasoe. Drivers race from 11 p.m. to 4:30 a.m. or so &#8220;any night of the week, rain or shine,&#8221; he said. Lookouts at key intersections use cell phones and flashing car headlights to warn if Okinawa police approach. They also signal when crashes occur.

Accidents are how the Marine MPs caught on to the sport, the master sergeant said: &#8220;We found ourselves investigating accident complaints where the damage to the cars just didn&#8217;t match the stories being told.&#8221; Car owners, to claim insurance for drifting damage, reported their cars were involved in hit-and-run parking-lot mishaps.

Most apparently got the message that the MPs were on their case. On a recent Sunday, not a Y-plated car or American was to be found at the high-speed skids that showered spectators with atomized rubber. A few cars twirled out of control, coming to a stop just inches from parked cars.

They recovered and quickly sped back on the course.

But not for long. About 15 minutes into the action, headlights blinked from a lookout up the street and a cell phone rang. Suddenly, spectators scurried into a half-dozen cars parked near the main intersection and drove into the night.

&#8220;Catching them in the act is very difficult,&#8221; said Yoshikazu Tamaki, deputy chief at the Traffic Enforcement Division of the Okinawa Prefectural Police. &#8220;Most of the time, by the time we get there we find only skid marks.&#8221;

Without evidence that the drifting exposed others to danger, prosecution is difficult, Tamaki said; usually, drifters caught at the scene are ticketed for other offenses, such as loud mufflers.

Okinawa police are planning to videotape any drifting they see, to use as court evidence of unsafe driving. They also have posted signs announcing the area closed to public traffic from 10 p.m. to 5 a.m. and plan to place non-slip strips on the road.

The car was totaled, he said.

Drifting, which originated decades ago at Japanese racetracks, quickly is catching on among Americans, popularized in part by Japanese comic books and video games.

Kawan Pressey, 20, a military dependent and mechanic, said he&#8217;s watched street drifting since his family came to Okinawa about a year ago. &#8220;I don&#8217;t watch drifting anymore because my friends have lost cars to the military police,&#8221; he said.

Pressey said most of the drifters he knew were dependent children of servicemembers. All have stopped their participation, since even spectators have lost their cars, he said. &#8220;I&#8217;ve heard only the Japanese are still drifting.&#8221;

The popular activity even has made its way into the high schools, he said. &#8220;We had one high-schooler who was drifting his vehicle on base and turned his car over on its side,&#8221; Delaney said. &#8220;And we had 10th-graders drifting on the golf course, wrecking golf carts.&#8221;

He said six juveniles who sneaked onto Kadena&#8217;s Banyan Tree Golf Course late at night destroyed 10 golf carts. They lost base privileges and each have to make about $1,250 restitution, Delaney said.

The lieutenant colonel, who runs the Kadena Disciplinary Action Program, said Marines are a bit tougher on drifting drivers. The penalty for an airman or Air Force dependent found guilty of reckless driving is suspension of a license for 30 days.

No drifting has been reported on Marine bases on Okinawa but Delaney said three areas on Kadena Air Base known to be used for drifting now are being watched closely.

&#8212; Chiyomi Sumida and Mark Rankin contributed to this report.