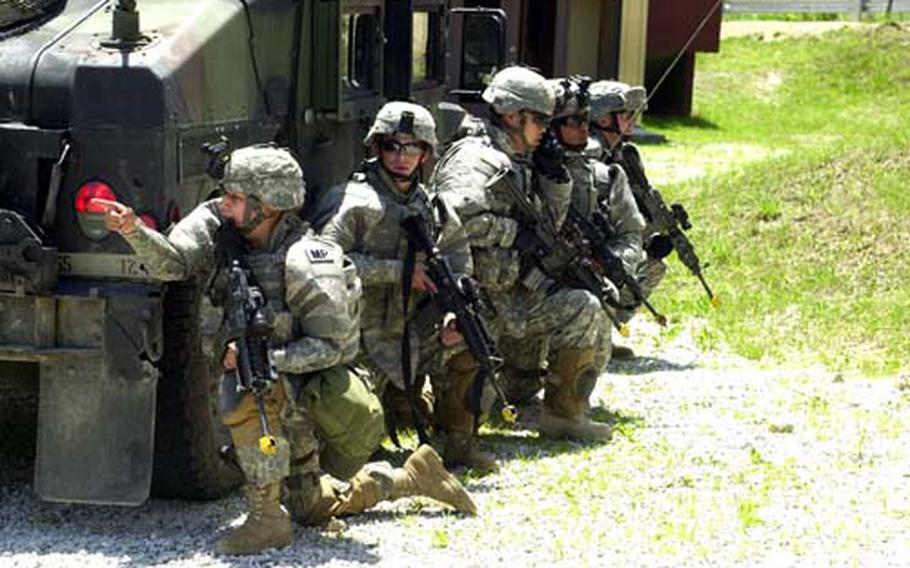 Military police react to sniper fire as they prepare to evacuate civilians from an apartment building during a training exercise Thursday at Rodriguez Range in South Korea. (Jon Rabiroff / S&S)

Military police react to sniper fire as they prepare to evacuate civilians from an apartment building during a training exercise Thursday at Rodriguez Range in South Korea. (Jon Rabiroff / S&S) 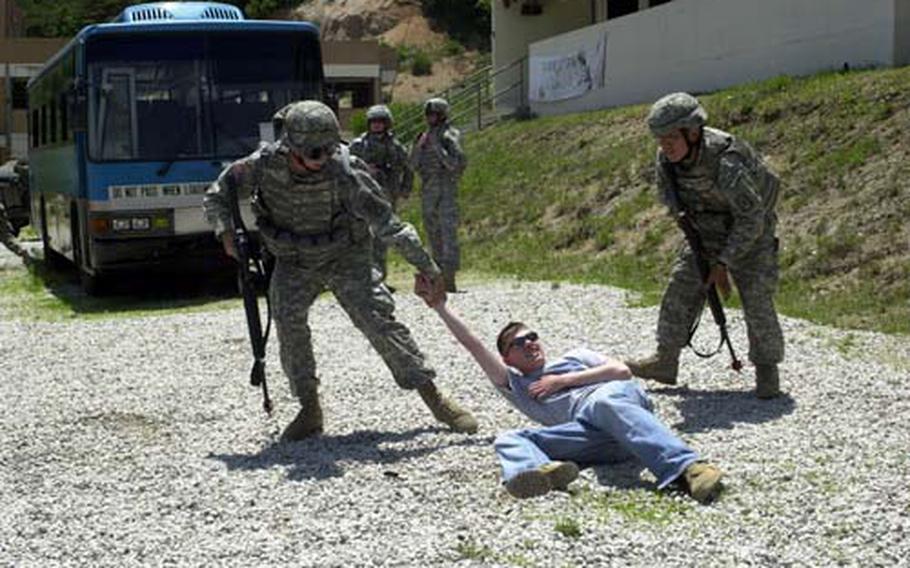 Military police pull an injured civilian to safety as snipers interupt the evacuation of an apartment building during a training exercise. (Jon Rabiroff / S&S) 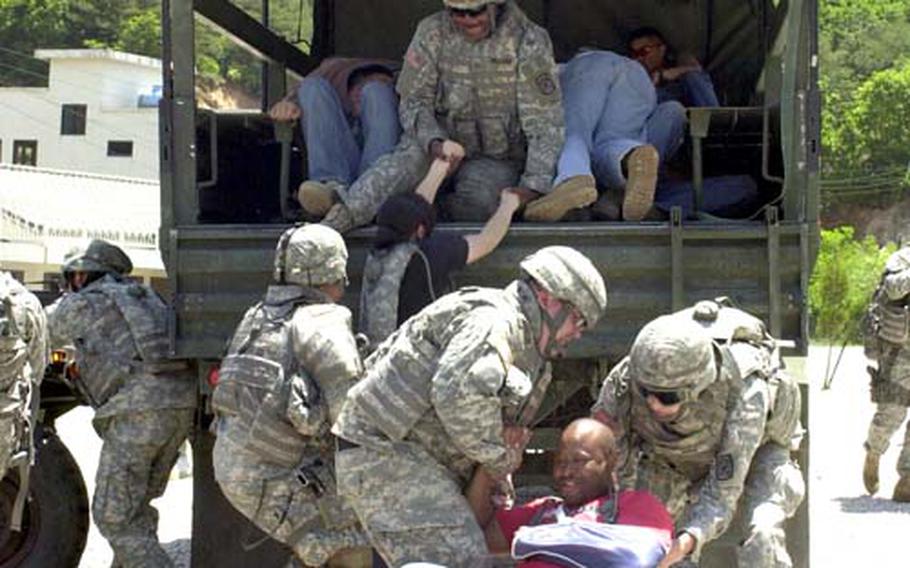 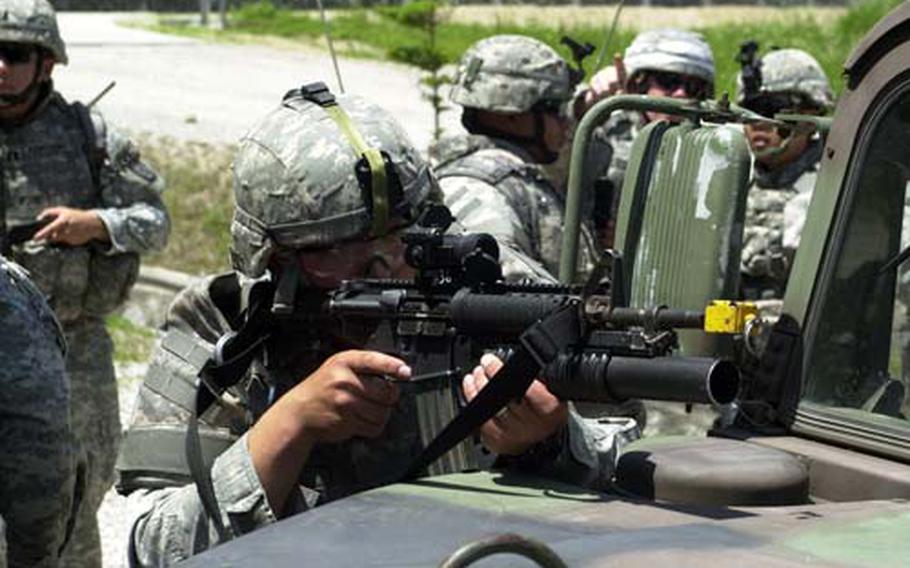 MPs guide civilians out of an apartment building under sniper fire during a training exercise. (Jon Rabiroff / S&S) 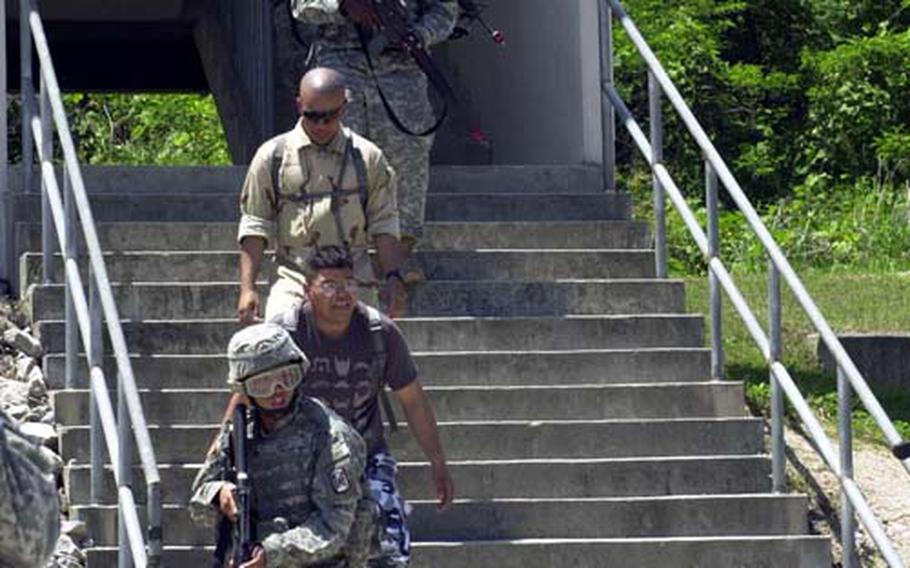 RODRIGUEZ RANGE, South Korea &#8212; A military police company came here last week to hone its skills, and not one traffic ticket was issued or one bar fight broken up.

In fact, the MPs stormed a building and evacuated civilians while exchanging gunfire with &#8220;snipers&#8221; during the exercise.

It seems you have to kick open a few doors if you want people to recognize that MPs are more than keepers of the peace.

The image of MPs is changing in the ranks, but not fast enough for some people.

But progress is being made, especially in Iraq and Afghanistan, Guerrieri said.

Members of the 55th MP Company and the Yongsan Garrison-based HHD 94th MP Battalion spent four days at Rodriguez Range &#8212; about 15 miles from the DMZ &#8212; as part of a scenario in which there had been &#8220;aggressive activity from the North Koreans&#8221; and the MPs had to secure a village and keep the adjacent road safe for U.S. and South Korean troops, Hunt said.

The exercise was not planned in response to the recent acts and talk of aggression from North Korea, he said, nor was it particularly aimed at preparing his company for any future action on the Korean peninsula.

In Thursday&#8217;s exercise, the MPs had to evacuate about 20 residents of an apartment building while under fire from two nearby buildings and a wooded area along their route.

Further complicating the task were a mock explosive device that went off as the convoy approached the building, the fact that a handful of &#8220;North Koreans&#8221; were among the evacuees, and a few of the civilians being injured by gunfire as they were led away.

Lt. Col. Matthew Coulson, the 94th MP Battalion commander, was satisfied after the evacuation, telling Hunt that the point of such exercises is to identify and correct any mistakes that were made.

&#8220;We just have to [continue to] educate our superiors to make sure they understand what the military mission is for the military police in combat, and how we can be a combat multiplier for the maneuver forces,&#8221; he said.