MPs at Yongsan Garrison on the lookout for illegal left turns 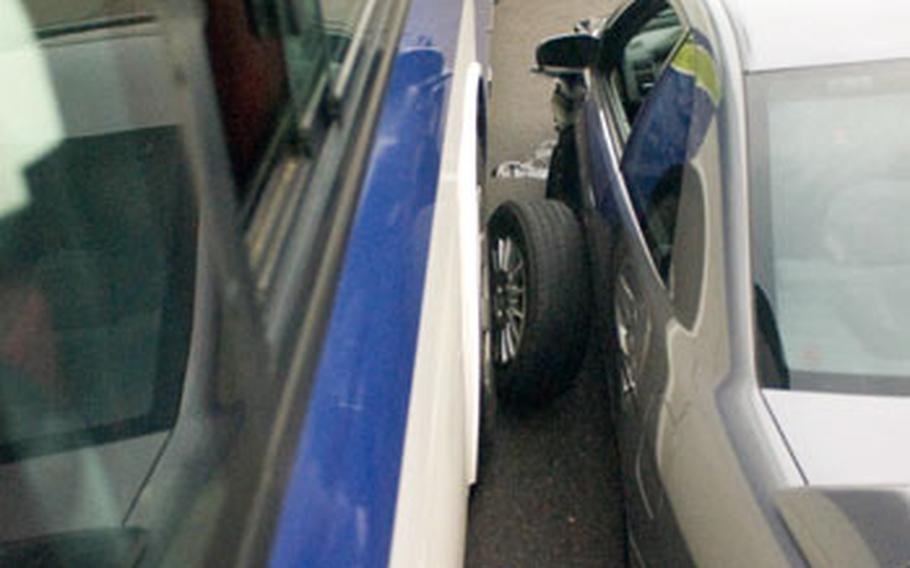 Police discuss a Friday afternoon accident involving a U.S. soldier and a bus full of South Korean soldiers. The accident was the second in three days at the intersection near Gate 1 that was caused by U.S. soldiers making illegal left turns. (Dave McNally / U.S. Army)

SEOUL &#8212; For the second time in three days, a U.S. soldier was rammed by an oncoming bus after making an illegal left turn near Yongsan Garrison&#8217;s Gate 1 on Friday.

The accident occurred just hours after the garrison launched a new initiative to prevent accidents on the busy road by stationing military police at random times at Gate 1 and on nearby Camp Kim to monitor the traffic.

South Korean police said the accident involved a U.S. Army sergeant and a bus carrying 21 South Korean soldiers and that there were no injuries.

On Wednesday a soldier and her passenger suffered minor injuries after making an illegal left turn across the bus lanes and being struck by a city bus.

McNally said they were treated at Brian Allgood Community Hospital and the driver was recovering Friday.

He said both drivers had been in South Korea less than 30 days.

McNally said the garrison is "very serious" about preventing soldiers from making the dangerous illegal turns, which require drivers to cross two bus lanes and three lanes of regular traffic.

For now, military police are notifying an offender&#8217;s chain of command, McNally said.

A plan to issue citations and detain those who make the illegal turns is under legal review, McNally said. There are questions as to whether the offenders can be detained and whether MPs can issue citations for off-post violations.

By Friday afternoon, McNally said, MPs had already identified three offenders, not including the soldier involved in the accident.

McNally said garrison officials also plan to add instruction about the area in the driver training program all personnel receive prior to getting a license.