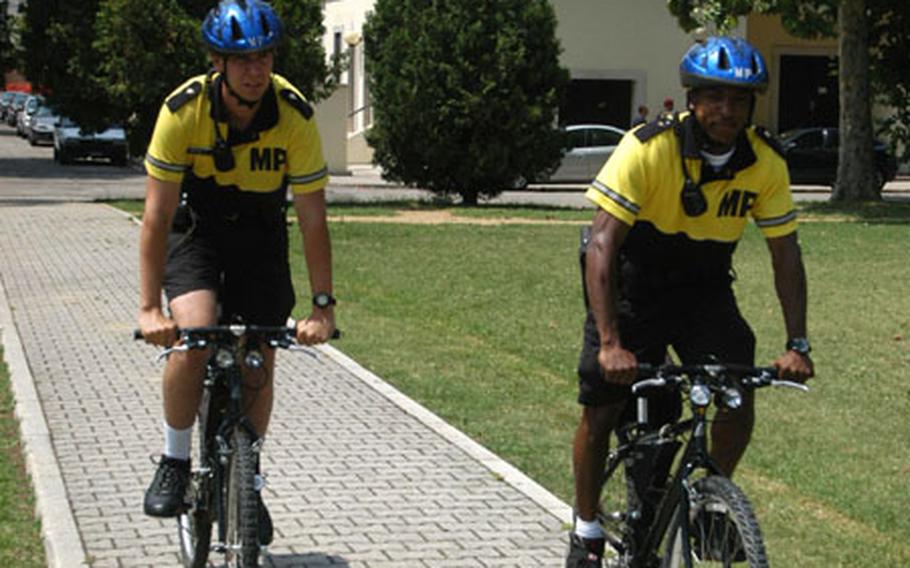 Military policemen Nathan Brumley, left, and Cyril Illidge aren&#39;t limited to the roads on Caserma Ederle or the nearby Villagio housing community when they conduct their bicycle patrols. A parking crunch and construction sometimes make the base a hard place to maneuver cars. Getting around on a bike is usually easier. (Kent Harris / S&S)

Military policemen Nathan Brumley, left, and Cyril Illidge aren&#39;t limited to the roads on Caserma Ederle or the nearby Villagio housing community when they conduct their bicycle patrols. A parking crunch and construction sometimes make the base a hard place to maneuver cars. Getting around on a bike is usually easier. (Kent Harris / S&S) 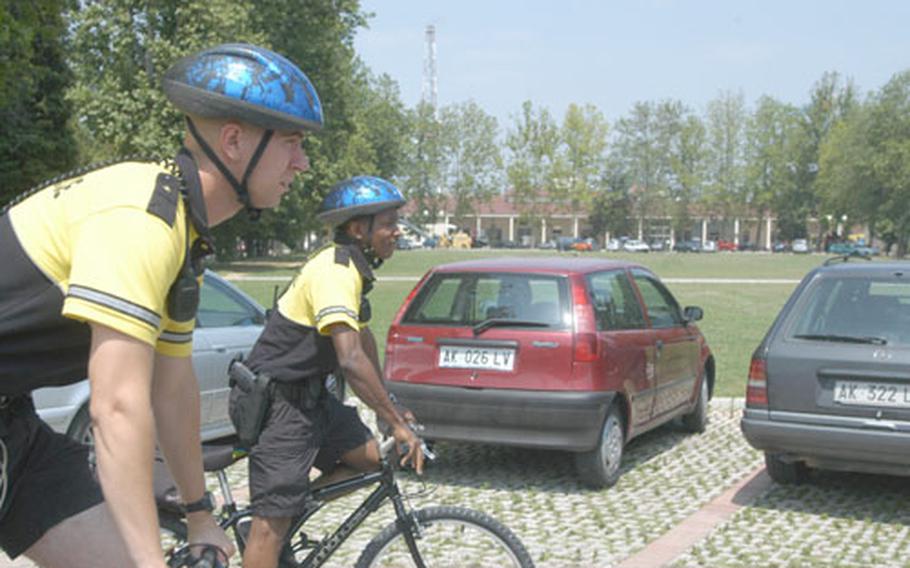 Military policemen Nathan Brumley, left, and Cyril Illidge begin their bicycle patrol on Caserma Ederle in Vicenza, Italy, on Thursday. The military has found at bases such as Vicenza that police on bikes often are able to get around easier and communicate more with the base population. (Kent Harris / S&S)

Once a bike messenger in New York City, Illidge is spending a few weeks at Caserma Ederle as part of his reserve obligation. Thursday, that meant strapping on a helmet, adjusting the seat and climbing on one of the four bikes the 13th Military Police Company uses to help keep the peace on base.

&#8220;It feels good,&#8221; Illidge said with a wide smile. And he wasn&#8217;t just talking about the bicycle seat. He also was referring to the uniform, a black-and-gold combination of short-sleeved shirts and shorts that has officers looking more like competitors in the Tour de France than standard military police officers in battle dress uniforms and black arm bands.

And if the uniforms make the officers stand out?

In fact, the more visible the officers are, the better.

Putting military cops on bikes isn&#8217;t a new idea. Some bases in Europe have had them for several years. Naval Air Station Sigonella in Sicily has one of the most active programs. At RAF Lakenheath in England, security police operate a fleet of 10 bicycles for much of the year. In Hanau, Germany, soldiers undergo several days of specialized training before getting on the bikes. Once they&#8217;re certified, there are military police officers on bikes somewhere in the community throughout the summer.

Not all the patrols feature police officers with uniforms as distinct as those in Vicenza, but all have two common elements: more interaction with the base community and quick access to places that cars can&#8217;t go.

Brumley admits that he wouldn&#8217;t stand a chance in a race with a car under most circumstances. But, thanks to traffic patterns, congestion and construction, cars can&#8217;t travel all that quickly on Caserma Ederle or the nearby Villagio housing community.

Hakama backs that up. He cites a case last summer when a few kids were hurt while playing around a construction site in Villagio.

Hakama says he decided to implement the bike patrol program at Vicenza last summer. The main focus is the housing area, where children are sometimes unsupervised. He said the patrols have helped statistically cut down on vandalism and other incidents. Officers rotate between the vehicle patrols and bike patrols, and they&#8217;re on the bikes only from April to September when the weather is generally cooperative.

Combating crime is a part of the mission. But Hakama dismisses the idea that policemen on bicycles lose some of their intimidation factor.

At other bases, programs vary in size and scope. Patrols aren&#8217;t generally as practical in communities that are more spread out. At such bases, bikes often are used when the base hosts special events with large crowds in relatively small areas. At the recent Fourth of July fireworks celebration in Aviano, for instance, security forces personnel were present on bikes.

Other bases surveyed say bike patrols save money &#8212; less wear on vehicles and less gasoline consumed. But Hakama said the savings at a base such as Vicenza would be minimal.