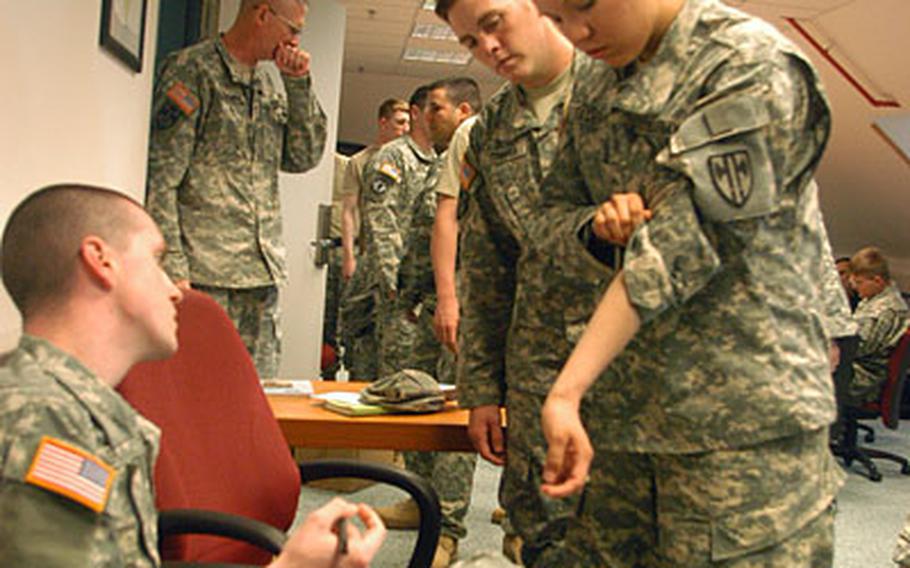 Pvt. Emily Faden, right, of 1st Platoon, 554th Military Police Company, shows where she received a tuberculosis detection shot to Sgt. Justin Rash, a medic with the Patch Health Clinic. The shots were given to determine whether Faden and other soldiers had contracted TB during their 15-month deployment to Iraq. (Charlie Coon / S&S)

Soldiers of 1st Platoon, 554th Military Police on Wednesday wrapped up seven days of reintegration, the military&#8217;s way of transitioning its troops from wartime to peacetime. It made for a soft landing and the soldiers were thankful for it.

For one week the troops slowly put their financial, personal and mental lives back in order before going on 30 days of leave. They learned of a variety of services that are available.

While tedious at times, it beat being turned loose upon arrival.

&#8220;There probably would have been a lot of alcohol-related incidents,&#8221; said Sgt. Nathan Gordon.

They were given a day to fix paycheck information and fill out travel vouchers, another to hear about stress symptoms and counseling. Their teeth were cleaned, eyes examined and paperwork filled out.

The soldiers had a day to give (blood, for testing) and receive (immunizations). And one to learn about tax returns (not due for 180 days) and to adjust powers of attorney.

The 554th&#8217;s company commander wasn&#8217;t in Iraq with the platoon, but he could relate. Capt. Renato Vieira redeployed in 2005 after a yearlong tour that included the first battle for Fallujah.

&#8220;[The memory is] something I will never be able to erase or get rid of,&#8221; said Vieira, grateful that the military now pays closer attention to post-deployment symptoms.

One felt the unit would not be fully reintegrated until Faden and Spc. Mark Romero pay a visit this week to Decatur, Ill.

Faden and Romero were going to see Carol Clifton, grandmother of Cpl. Karen N. Clifton, 22, who died June 21 in Baghdad when a small missile struck her Humvee.

Faden was Clifton&#8217;s longtime roommate; Romero, one of her best friends. Romero often talked on the phone from Baghdad with grandmother Clifton, both before and after his friend&#8217;s death.