MP killed in attack one day before departure 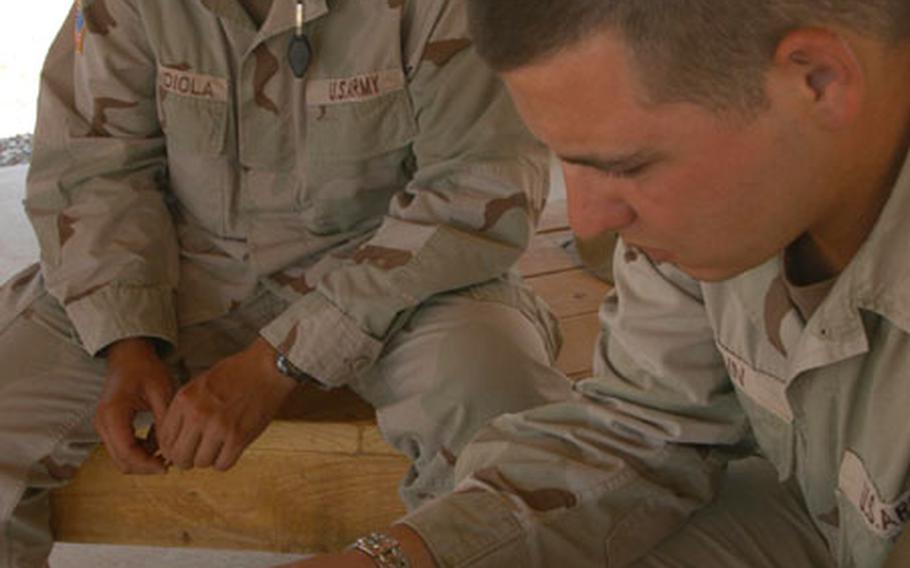 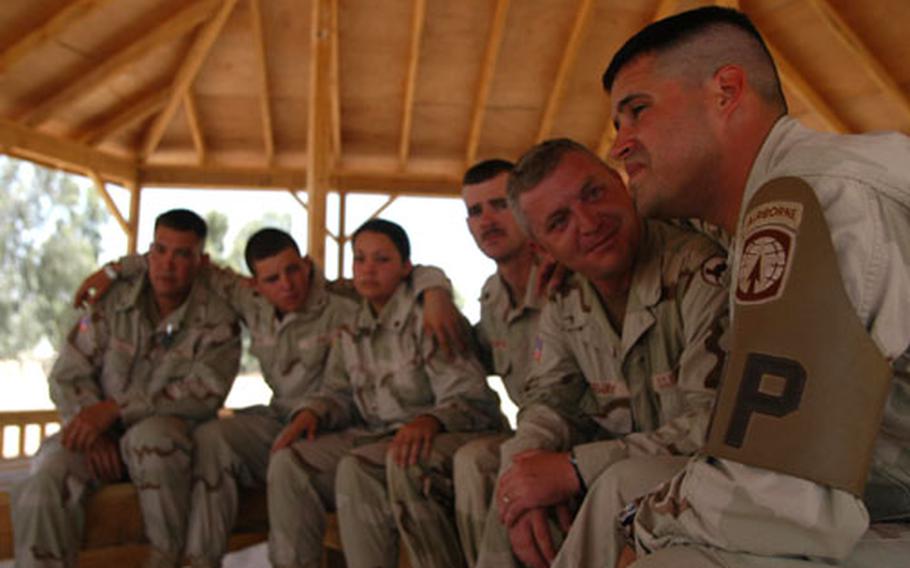 Sgt. Elvin Irizarry, right, and other friends of Sgt. Arthur Mastrapa mourned their pal who was killed while waiting outside the post exchange the day before he was to return home to his wife and children. (Rick Scavetta / S&S)

CAMP ANACONDA, Iraq &#8212; After a year in combat, Sgt. Arthur Mastrapa was waiting outside the post exchange Wednesday when an enemy rocket ended his life. He was supposed to fly home Thursday.

Mastrapa, 36, a military policeman from Apopka, Fla., was one of three troops killed in the attack on the logistical base at Balad Air Base. Three 127 mm rockets hit the camp, base officials said, including one direct hit on the PX, which was filled with shopping troops.

The attack wounded 25 other people, said Maj. Richard Spiegel, a base spokesman.

Since the U.S. military invaded Iraq last year, 828 troops have died. The military has not yet released the names of the other two soldiers killed, pending family notification.

On Wednesday afternoon, Mastrapa and his pals were in the Internet caf&#233; when a mortar alarm sounded, ending their computer use, Porter said.

Mastrapa was researching hotels online and had just found a nice place to take his wife, Jennifer, for her birthday next week. He hung around the PX area hoping to go back online and book a romantic getaway for her, his friends said.

One friend, Spc. Stacey Lauricella, 24, of Ocala, Fla., was near the PX calling her family.

Another friend, Spc. Christopher Powell, 24, of Jacksonville, Fla., chatted with Mastrapa on the steps of the PX. They wanted to go home to see their kids, Powell said.

Then, the rocket exploded, sending Powell spinning and Mastrapa to the ground. Lauricella hung up the phone and ran toward the sound of the blast.

Claiming to be a medic, Lauricella faked her way through the crowd to Mastrapa so he would not be among strangers, she said. Mastrapa was still alive when she reached him.

Powell received several pieces of shrapnel in his face, legs and back.

He&#8217;ll go home on crutches. It wasn&#8217;t until 45 minutes later, at the medical aid station, that Powell learned Mastrapa was dead.

Staff Sgt. Mark LeBlanc rushed through a cloud of dust and spotted Davis crumpled up on the ground. He and two other New Hampshire National Guardsmen began attending to the wounded, Valas said.

At least three fellow infantrymen who had Davis&#8217; blood type donated blood to their injured comrade. Davis suffered severe shrapnel wounds to his chest and was among several soldiers evacuated Landstuhl Regional Medical Center in Germany.

Meanwhile, the military caught an Iraqi worker on base that may have been a spotter for the attackers, Mastrapa&#8217;s friends said. Two others were caught outside with trace elements of explosives, they said. The Army could not confirm either capture.

On Thursday, soldiers from Mastrapa&#8217;s unit, the Army Reserve&#8217;s 351st Military Police Company, gathered under a gazebo on the base 45 miles north of Baghdad to remember Mastrapa.

Mastrapa left home in February 2003 when his company mobilized. Since last May, the military police escorted supply convoys from Scania, a base south of Baghdad. In April, the unit&#8217;s tour was extended.

Prior to Wednesday&#8217;s attack, the unit had lost only one comrade. On May 9, a passing Abrams tank crushed Sgt. Rodney Murray, 28, of North Carolina, in his Humvee. He left behind a wife, Amanda.

The unit arrived in Balad in early June to await a flight home. Mastrapa was scheduled to fly home Thursday. Half the company already left Tuesday for Fort Stewart, Ga. They left by alphabetical order, friends said.

An avid Miami Hurricanes fan, Mastrapa was a mail carrier in Altamonte Springs, Fla. A regular newspaper reader, Mastrapa began his days with a cup of coffee and Stars and Stripes, said his good friend Sgt. Elvin Irizarry, 29, of Orlando.

Mastrapa and his wife, Jennifer, have a daughter, Marisa, 8, and a 20-month-old son, Reece. Mastrapa&#8217;s wife learned of his death Wednesday evening, military officials said.

During their tour, Mastrapa, Irizarry and Sgt. Fred Mendiola made a pact to care for each other&#8217;s families if one were to be killed. A nightmare came true, Irizarry said. He and Mendiola now intend to keep their deal.