MP brothers lay down the law in Baghdad 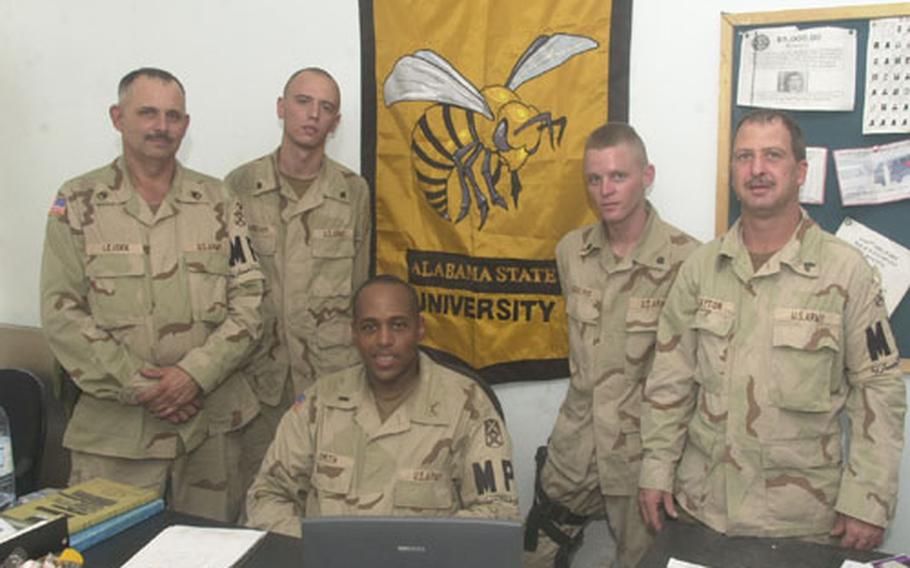 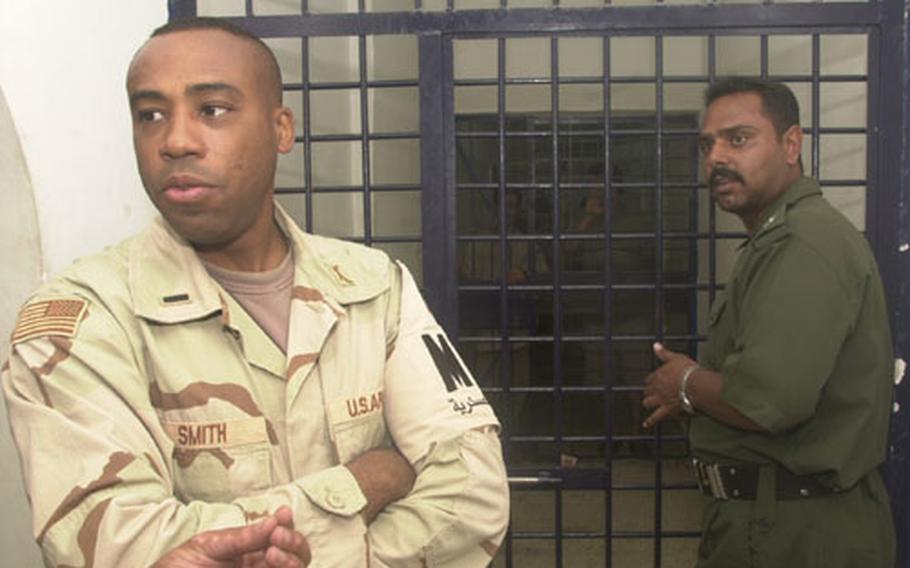 1st Lt. Kevin Smith describes himself as "hard, but fair." A different personality than his elder brother, Herbert, Kevin Smith says he sees himself remaining in the military for 30 years. Here he confers with Iraqi police in front of abu Deshear police station’s holding cells. (Terry Boyd / S&S)

BAGHDAD, Iraq &#8212; For two millennia, Baghdad has been the setting for 1,001 fabulous tales of heroism and dastardly deeds.

To those, add the tale of how two American sheriff&#8217;s deputies became the Sharifs of Baghdad.

About five miles away, younger brother 1st Lt. Kevin Smith, 36, has the identical job with the same National Guard company &#8212; the 1165th Military Police Company, based in Fairhope, Ala. &#8212; though in the much tougher Abu Deshear neighborhood.

Back home, they&#8217;re both deputies with the Montgomery County Sheriff&#8217;s Department in Montgomery, Ala.

They have the same number of children. Kevin Smith has two girls; Herbert Smith a son and a daughter.

They even have the same alma mater, Alabama State University.

Now they are the faces of American justice, fair play and administrative capability to thousands of Iraqis in the midst of Baghdad&#8217;s anarchy. Both seem a bit amazed, though not daunted by the level of responsibility they have here.

In their civilian jobs, the Smiths take orders. Here, they and their platoon of MPs are the law. Their basic mission is to mold Iraqi police into a disciplined, effective force while sorting out right from wrong until the local police can do it themselves.

For two ordinary guys &#8212; their name is Smith, for crying out loud &#8212; they are hardly rubes. They were born and reared in Chicago, where they dealt with all races and ethnic groups.

The Smiths grew up together, raised by a grandmother in Alabama after their mother died, leaving their father overwhelmed with five children and a job at Ford Motor Co. in Chicago.

But spend some time with them, and the differences reveal themselves. Kevin plans to stay in the Army as long as he can. Herbert plans to put in 20 years and get out.

As he does in Iraq, Kevin has the riskier job back home, a deputy serving criminal warrants. Herbert is a deputy in legal services, serving civil summonses.

Walking through the hallways of the Abu Deshear station, Kevin comes off as tough guy, the Iraqi police under his control deferential.

Kevin likes to codify everything, down to how many offenses Iraqi police can commit before being terminated. He takes great satisfaction in having fired a corrupt Iraqi police colonel.

It&#8217;s not unusual for Iraqis who run into a brick wall with Kevin to end up appealing to Herbert, usually to no avail.

Herbert finds all the administrative stuff a little boring, as opposed to foot patrols, which can be extremely exciting.

At al-Dorah, Herbert&#8217;s office is incredibly busy, but with a relaxed atmosphere. He is casual with his men and with the Iraqi police. On patrol, kids follow him around like puppies. He&#8217;s been known to buy prisoners sandwiches out of his pocket.

Herbert is also a wordsmith and loves to wax philosophic.

On the dangers of policing Baghdad, he says:

The Smith brothers also watch each other&#8217;s back. A few weeks ago, an Iraqi informant came to Herbert, knowing his brother was commander at Abu Deshear. The informant didn&#8217;t want anyone to see him going into Abu Deshear, so he came to al-Dorah to warn of threats against Kevin&#8217;s police station.

Herbert relayed the information to his younger brother; says Kevin,&#8221; I would have done the same for him.&#8221;

BAGHDAD, Iraq &#8212; Brothers Kevin and Herbert Smith have the same job. The only trouble is, it&#8217;s the same job assembled from a million moving parts.

Kevin Smith commands the police station at Abu Deshear, a residential area that he says has good people but a fair number of outside gangs made up of the thousands of criminals Saddam Hussein released just before the war.

Their mission: Take 16 MPs and 12 civilian police and make a key piece of Washington&#8217;s nation-building plan happen; bring law and order to their corner of Baghdad.

The Smiths, both first lieutenants, are among the U.S. soldiers who have the most interaction with Iraqis, and who are having the biggest impact in the recovery. That involves:

&#8226; Training Iraqis to be fair, effective police who can provide law and order efficiently, without violating human rights.&#8226; Hiring and firing said Iraqis until they all come to work, and are, as Kevin says, &#8220;serious about their jobs.&#8221;&#8226; Keeping police and Army vehicles running.&#8226; Keeping police guns accounted for.&#8226; Calculating payrolls.&#8226; Running networks of snitches, collecting all the intelligence possible.&#8226; Being the neighborhood beat cop, the friendly face of America, as opposed to the infantry soldiers who kick down doors and grab the bad guys.&#8226; Holding and transferring prisoners.&#8226; Oh, and here&#8217;s the big one: Winning back the ordinary person&#8217;s trust and confidence &#8212; if they ever had any &#8212; in a country where the best they could hope for was that Saddam&#8217;s cops were merely on the take, and not preparing to make their friends and family disappear.

Compared to security around most U.S. bases, the police station is extremely vulnerable. A rocket-propelled grenade three weeks ago injured three of Kevin&#8217;s soldiers. &#8220;It was a wake-up call&#8221; to just how dangerous his neighborhood is, he said.

Herbert&#8217;s station is just busy. People from the area line up two cars deep in the parking lot, waiting for a chance to talk to him.

Everyone wants something. A guy wants a weapons permit so he can protect the mosque. A woman approaches him on patrol to ask when he&#8217;s going to get the power back on. Merchants seem genuinely pleased to see him.

The Smith brothers believe their biggest threats are outsiders who come into their areas as opportunistic criminals, or as members of organized-crime gangs.

They feel the tide is turning in their favor.

Now, more and more, the Iraqis are taking the imitative, and Herbert says he runs into several Iraqi policeman working as he patrols al-Dorah.

Herbert believes it will happen.