U.S. Army Staff Sgt. Jeff Schaffer drinks tea with an Afghan National Police station commander in Kandahar. Schaffer is part of a platoon moving into the substation as part of a program to train more closely with the Afghan security forces. (Heath Druzin / S&S) 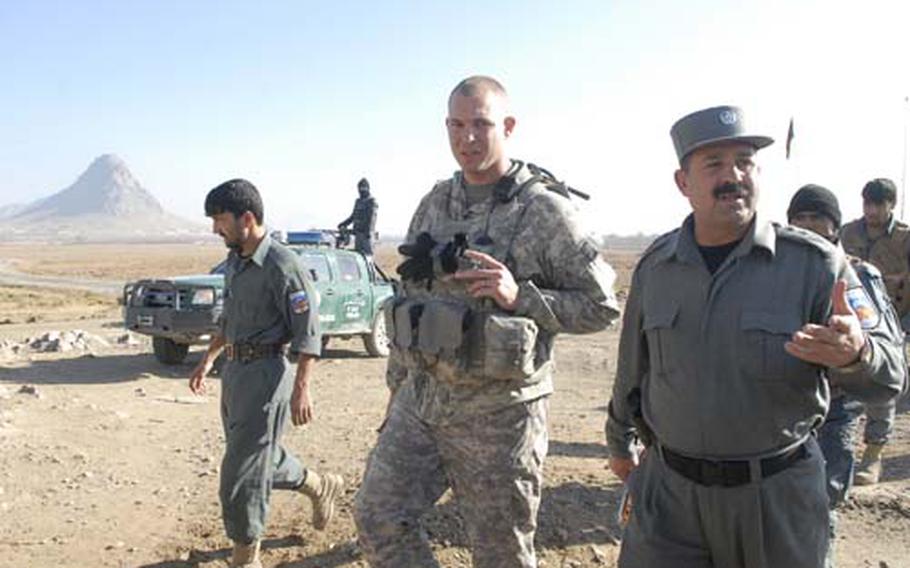 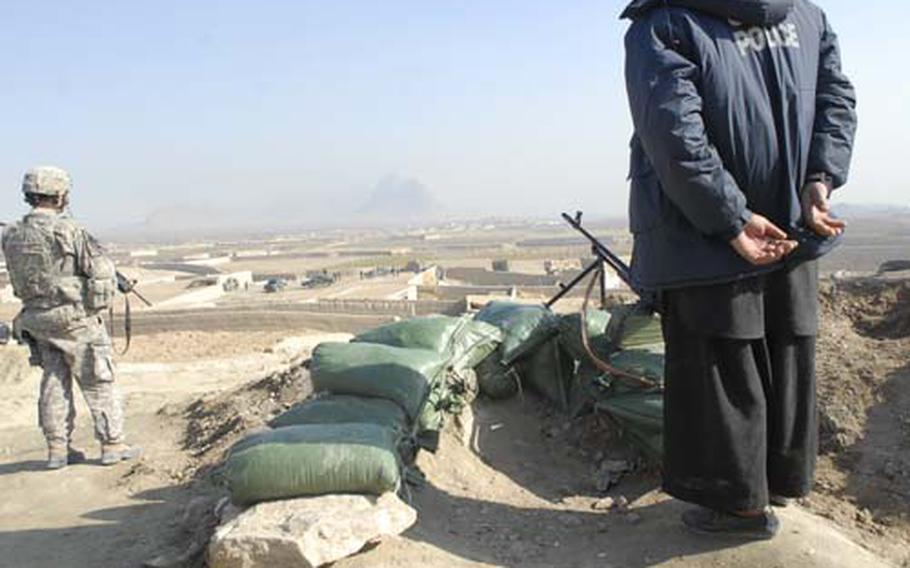 KANDAHAR, Afghanistan &#8212; Black Sheep Platoon&#8217;s new home has one thing going for it: a sweeping view of the Arghandab Valley and the bare, jagged mountains that erupt out of a fertile but troubled patchwork of orchards and crop fields.

The creaky, bite-sized compound on the edge of Kandahar, known as Police Substation 7, also sports a backyard minefield, unreliable electricity, and most importantly to the new U.S. strategy in Afghanistan, a handful of beleaguered Afghan National Police.

Before now, U.S. forces have lived and worked alongside their Afghan counterparts in the field and on U.S. or joint facilities, but Black Sheep Platoon is taking it a step further. As part of a new program, they have moved into the primitive Afghan substation, enduring the same hardships and, they hope, forging stronger bonds.

While U.S. troops are making some improvements to the substations, living alongside Afghan police means Spartan living conditions and a steady diet of Meals, Ready to Eat. The reeking, filthy bathroom consists of a hole in the ground.

For now, though, the frustrations outweigh the triumphs for Schaffer and other soldiers with the 293rd Military Police Company, who are responsible for much of the police training in Kandahar province.

Gen. Stanley McChrystal, the top military commander in Afghanistan, stresses getting closer to regular Afghans and stepping up training of the Afghan security forces so that they can eventually take control of the country, allowing American forces to leave. A key part of that program is getting trainers such as the soldiers of the 293rd off larger forward operating bases and embedded with Afghan police and soldiers.

The embedding program is &#8220;critical&#8221; to turning the corner in Afghanistan, Lt. Gen. David Rodriguez, who oversees day to day military operations in Afghanistan, said in a recent interview.

But even Afghan commanders concede that the coalition trainers face a monumental task. In a recent interview, Kandahar province&#8217;s chief of security, Col. Fazal Ahmad, ticked off a long list of problems.

Ahmad, who had just ordered one of his own police commanders arrested for Taliban ties, was struggling to rein in rogue officers who had set up a checkpoint without approval. He asked U.S. soldiers to arrest another commander suspected of involvement in a kidnapping.

Police stations often lack the basics of clean water and electricity, and many local commanders complain of a lack of fuel for trucks. Sitting on the bare floor of his office with Schaffer, Lt. Col. Abdul Qader, the weary-looking police commander of Substation 7, said six of his officers recently left without permission, leaving him with about half of the 30 or so officers he is supposed to have at his station.

The risk of living side-by-side with a poorly paid, poorly trained force that still struggles mightily with insurgent infiltration was highlighted by the recent killings of several U.S. troops at the hands of Afghan soldiers and police.

Despite his concerns, Thurman said he sees no other choice.