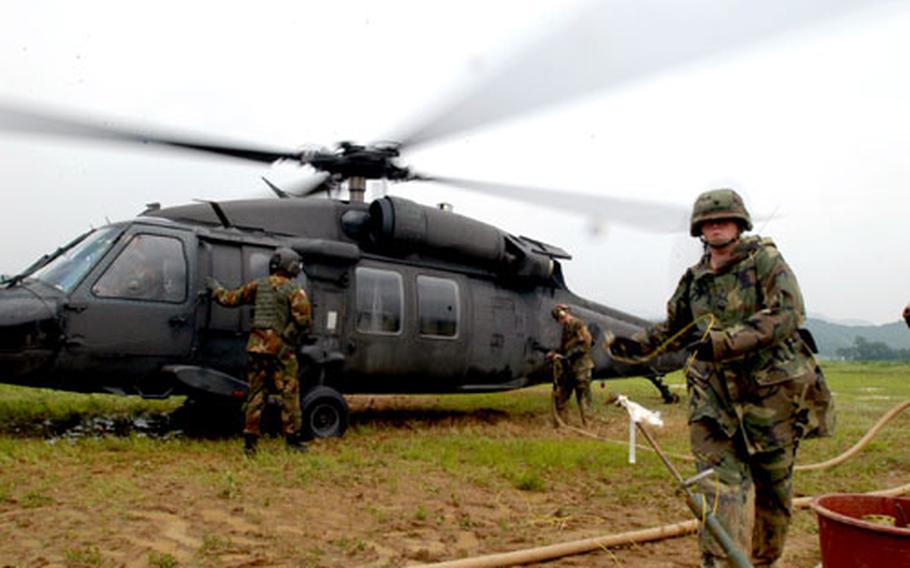 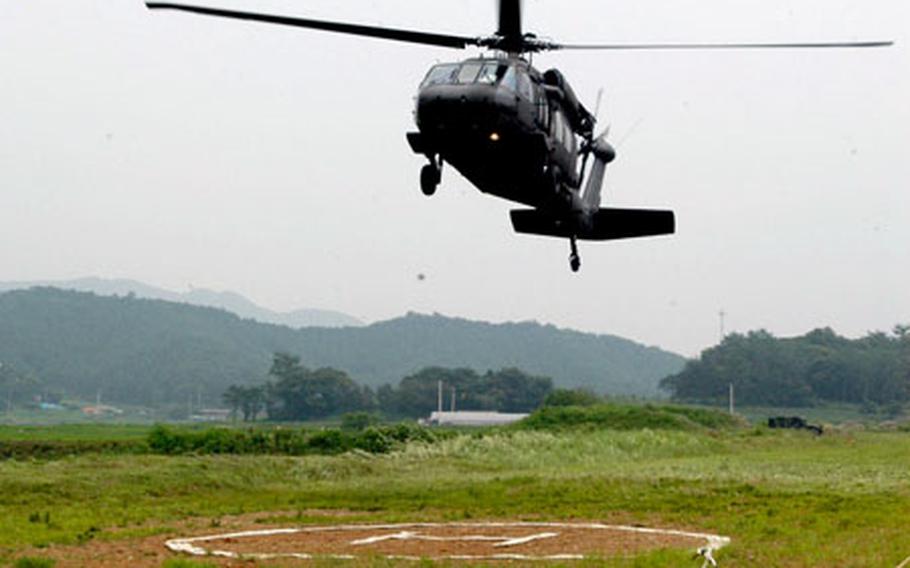 A Black Hawk lands at a Forward Arming and Refueling Point near Rodriguez Range on Thursday. (Seth Robson / S&S) 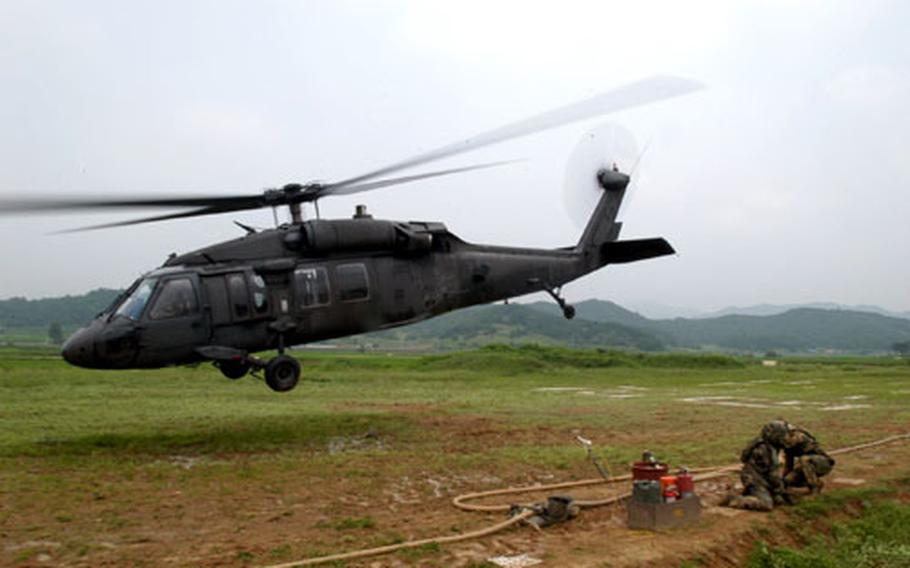 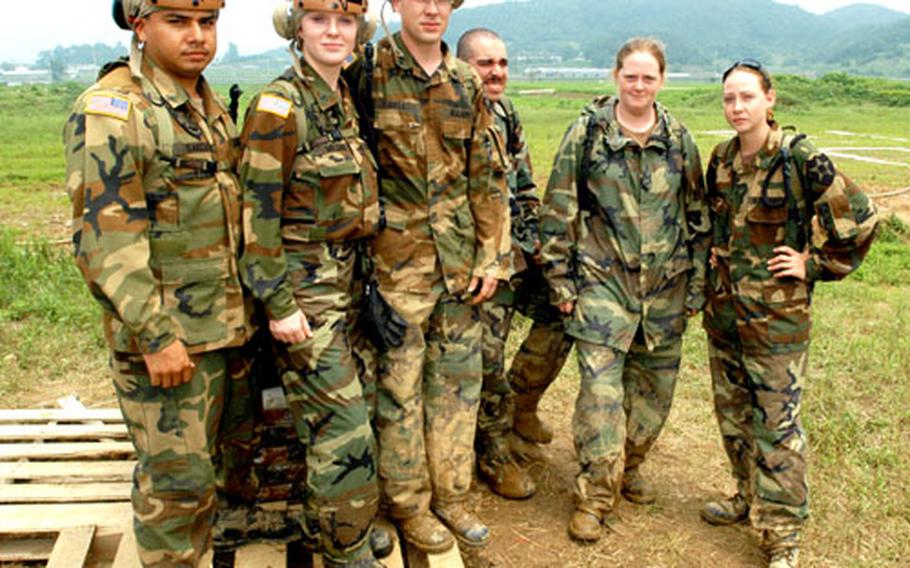 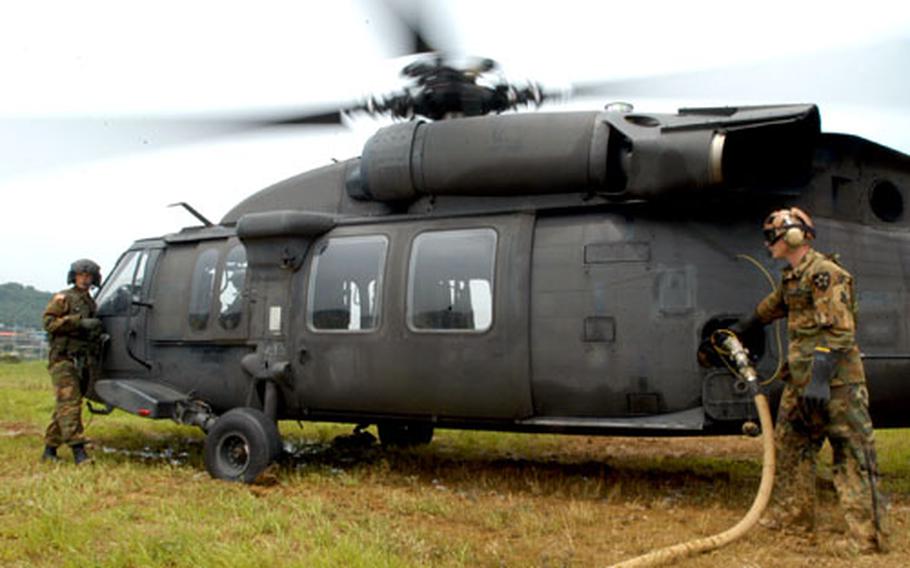 It is the unit&#8217;s first trip to the range since it joined the brigade in June, Quackenbush said.

Before the new brigade, called an MFAB, was formed, the 2-2 went to the range on its own.

About 60 door gunners are training this week with 15 to 20 Apache crews. All the units shared a pair of Forward Arming and Refueling Points, he said.

On Thursday, 2-2 soldiers manned one of the refueling points, which consisted of a pair of fuel tankers, a few Humvees and some tents next to a muddy air strip among rice paddies, in a valley about 12 miles from the demilitarized zone.

Thick fog, which almost grounded the aircraft, meant the fuelers could hear the helicopters coming long before they saw them. When the Black Hawk approached, the fuelers sprang into action, manning hoses connected to the tankers and metal stakes attached to wires.

One fueler, Spc. Joe Bell, 25, of Lake Ariel, Pa., said the stakes were driven three feet into the ground, then attached to the helicopters with the wires to ground the machines and prevent static electricity discharges that might ignite fuel.

Working within the brigade means the fuelers, who previously worked just with Black Hawks, now handle Apaches and Chinooks, he said.

&#8220;The Apaches are complicated. They have a control box and aft and forward tanks,&#8221; he explained.

Life at the refueling point has not been a picnic so far, the fuelers said.

&#8220;There are flies and mosquitoes,&#8221; said Pvt. Vladimir Garcia, 23, of Miami, who enjoys the fresh wind from the helicopters when they arrive.

For Spc. Nicole Mabury, 24, working at the fueling and arming point carries a sense of d&#233;j&#224; vu. The Baltimore, Md., native used to work at an All Star Express service station in Cumberland, Md., she said.