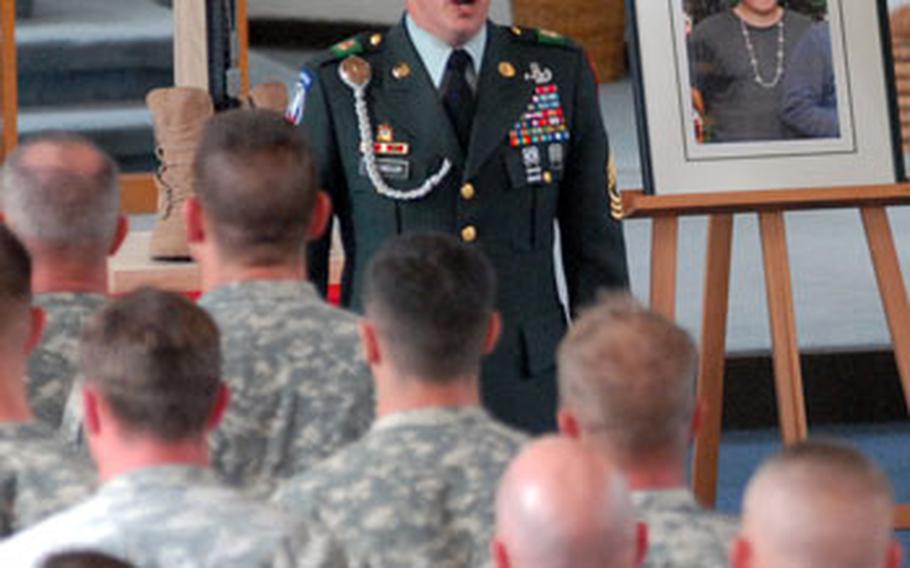 MANNHEIM, Germany &#8212; The Ogre liked his Oreos and orange juice.

And at Staff Sgt. Brian Studer&#8217;s memorial ceremony Tuesday, two packs of Oreos sat unopened underneath the helmet, rifle, dog tags and boots that are standard tributes for fallen warriors.

Studer &#8212; who earned the nickname "The Ogre" for his large frame and quiet disposition &#8212; died Aug. 22 in Ghazni, Afghanistan, when the bomb he was attempting to deactivate exploded. Studer, 28, served as a team leader with the 720th Explosive Ordnance Disposal Company, 28th Transportation Battalion, 18th Military Police Brigade, 21st Theater Sustainment Command.

Information gathered from EOD reports &#8212; such as those generated by Studer &#8212; is used to develop blast-resistant vehicles and IED countermeasures, said Sgt. Maj. Lauren Larson, with the 21st Theater Sustainment Command&#8217;s EOD cell.

"This is the caliber of the soldier we are here to remember &#8212; one of the finest that America has to offer," he said. "A dedicated NCO that placed himself between the bomb and his fellow soldiers and in doing so, paid the ultimate price."

Studer always worried about the safety of his fellow soldiers, according to the comments of Sgt. 1st Class Jay Wilson that were read aloud at the ceremony.

"I cannot count the number of times he has saved us by doing what we do in our job," according to Wilson&#8217;s comments. "He never asked for thanks or gratitude &#8212; just a few drink boxes of orange juice and Oreos."

The Ogre also liked his goat. Another unit on the forward operating base where Studer worked had a goat, but did not adequately care for it. The Ogre and another soldier stole the goat and brought it to their own compound.

"The Ogre would then go out every night and water and talk to his goat and then bring it inside if it rained," according to Wilson&#8217;s comments. "This is the kind of man Staff Sgt. Brian Studer was &#8212; caring, compassionate and honorable."

Studer joined the Army in 1999 and became a combat engineer. He deployed in support of the Iraq War in April 2003. He changed military occupational specialties and became an explosive ordnance disposal specialist in January 2006.

Studer served a stint in South Korea before joining Mannheim&#8217;s 720th EOD Company in April 2007. He deployed with the company to Afghanistan&#8217;s Forward Operating Base Salerno in August 2007.

"God, look over The Ogre and take care of him as he has earned his place by your side," Wilson said. "I know you&#8217;re in heaven now, and I hope you have a never-ending plate of Oreos and orange juice. Goodbye my friend."

Studer posthumously received the Bronze Star, the Purple Heart and the Combat Action Badge. He is survived by his mother, father, a brother and two sisters.