A memorial service was held Thursday at the Fligerhorst Caserne chapel in Hanau for Sgt. Mason Douglas Whetstone, who died July 17, while serving in Iraq as a member of the 1st Armored Division&#39;s 4th Brigade Combat Team. (Michael Abrams / S&S)

A memorial service was held Thursday at the Fligerhorst Caserne chapel in Hanau for Sgt. Mason Douglas Whetstone, who died July 17, while serving in Iraq as a member of the 1st Armored Division&#39;s 4th Brigade Combat Team. (Michael Abrams / S&S) 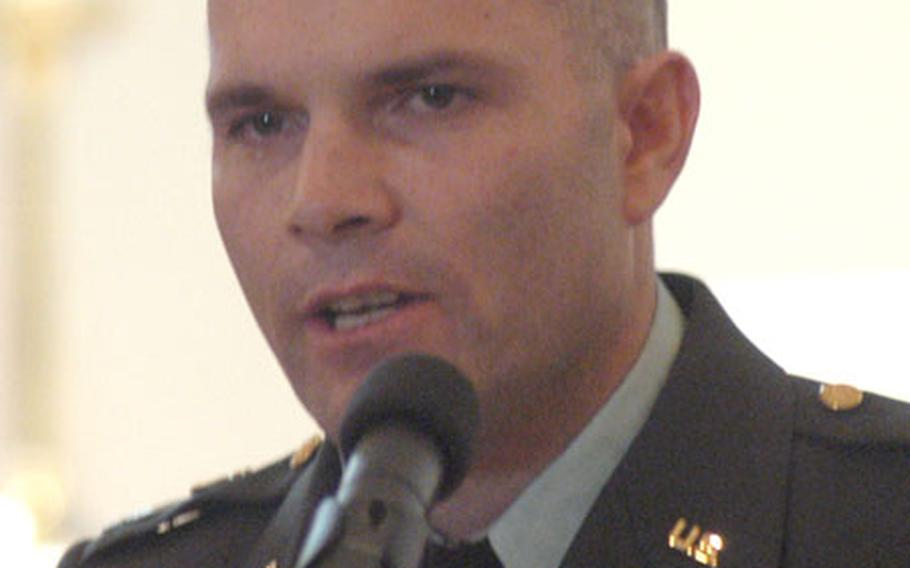 HANAU, Germany &#8212; Perhaps the most poignant moment in the memorial service for the fallen sergeant came at the beginning. For a few seconds during a slideshow of Sgt. Mason Douglas Whetstone&#8217;s life in the desert &#8212; hamming it up with buddies, tapping at a laptop computer &#8212; there glowed a shot of him wearing sand-colored fatigues and standing by a sign: &#8220;Hanau or bust.&#8221;

Whetstone, 30, would never see Hanau again. The soldier died July 17 at Baghdad International Airport from what the military described as &#8220;noncombat injuries.&#8221; His death is still under investigation. No further information had been released as of Thursday.

&#8220;Mason never became angry,&#8221; said Sgt. Brian Pardue, a friend who shared the same job. Whetstone tackled problems with logic, not heat. He had once worked as a Florida police officer. He had fought in the first Gulf War.

The company commander, Capt. Michael Mouritsen, recalled Whetstone&#8217;s first mission as a team chief: setting up an airfield in Iraq.

She is left with two daughters, Layne, 6; and Deborah, 3.

Chaplain (Lt. Col.) George Miller led the congregation in a reading of the 23rd Psalm.

A second chaplain, Capt. Robert Brott, encouraged everyone to really live, to cease thinking of life as some distant point blinking in the future, to relish the here and now.

There were also light moments. Mouritsen told the crowd of visiting Whetstone&#8217;s tent and finding him apparently asleep inside a &#8220;wind tunnel&#8221; he had set up using two fans and a poncho, the whole affair billowing with cool air. Somebody mentioned coffee, and Whetstone snapped awake.

After the service, Pardue remembered how Whetstone would remove the batteries from disposable cameras and zap fellow soldiers.

A former tanker, Whetstone had found some of his old pals were in Baghdad, too. He took Pardue and some other traffic controllers on a tour of the M1 Abrams.

They crawled through its hatch; sat inside it, saw how it worked. Whetstone looked on, smile on high beam.

Young soldiers looked up to the sergeant. Mouritsen described Whetstone often looking at his frustrated troops, tapping his head and telling them, &#8220;Think happy thoughts.&#8221;