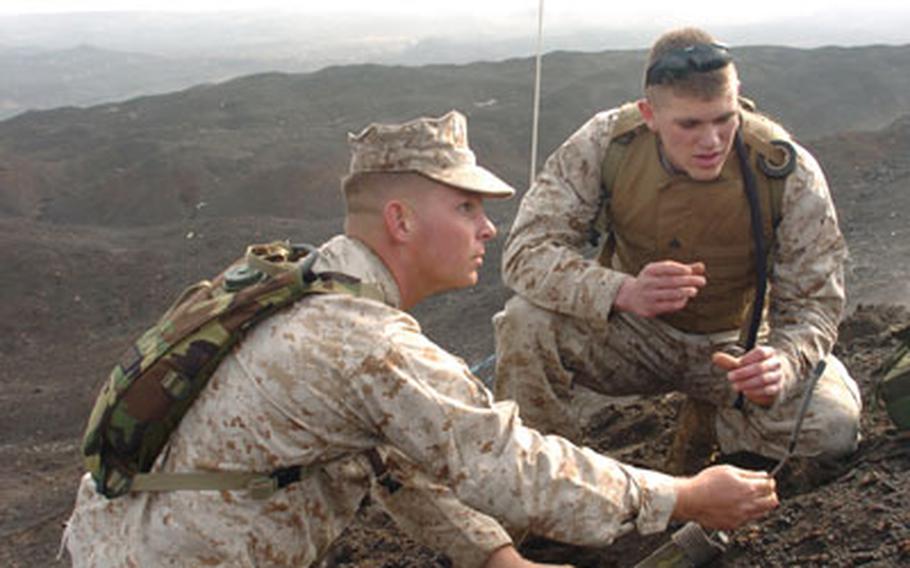 It&#8217;s difficult to put a price tag on the intangibles that make explosive ordnance disposal an undesirable career field: the stress of frequent deployments, of close calls on the job, and of losing a large number of colleagues.

EOD casualties are piling up. Since 2006, the Air Force has lost eight airmen in Iraq, according to Chief Master Sgt. Robert Hodges, the Air Force&#8217;s EOD career field manager. Thirty-five EOD airmen have received Purple Hearts, given to military members wounded or killed in combat. Five have lost limbs to roadside bombs.

The Navy has lost 11 EOD personnel in Iraq.

And the Marines have lost 12 in the war, according to Capt. Blanca Binstock, a Marine Corps spokeswoman at the Pentagon.

Army officials at the Pentagon did not provide figures.

Most EOD members knew someone killed in the field, and almost all have had a close call of their own, they say.

Kennedy, 37, was there. The team was ambushed while responding to a report of an improvised bomb, he said.

"I&#8217;m still pretty much the same person. But of course, it changes you in little ways," he said. "You might have to ask somebody else who knows me pretty well."

The closest call might belong to Master Sgt. Michael Burghardt. In September 2005 in Ramadi, 14 pounds of explosives detonated a foot behind him, tossing him 10 feet in the air. His legs were bloodied, his skin burned and pockmarked with fresh holes.

He gained national attention, however, not so much for walking away from the roadside bomb, but for flipping his middle finger to an unseen insurgent who triggered the explosion, a defiant moment captured on camera by an embedded journalist.

The war has also hit close to home for Army staff sergeants Andrew Livingston, 31, and Adam DeMoss, 23, both assigned to the 718th EOD Company at Yongsan Garrison, South Korea.

"You realize they were doing the job that they loved. You just take it as part of the job and you have to deal with it," Livingston said.

You also "grieve as professionally as you can" because there&#8217;s still a job to do, said Senior Airman Blake Lundstrom, 28, an EOD craftsman at Misawa Air Base, Japan. He knew four Air Force EOD technicians killed in combat &#8212; one whom he was deployed with at the same base.

Lundstrom has thought about leaving his career field, but not because of the risk.

The operations tempo for all of the military&#8217;s bomb disposal experts has been unrelenting at times.

But some units may get a breather.

The Navy has taken steps, spokeswoman Katie Suich said, to increase the amount of time EOD sailors spend at home between deployments &#8212; an effort it&#8217;s extending across the fleet. The Navy&#8217;s goal for EOD is six months deployed, 12 months home.

The Air Force&#8217;s support of the EOD mission downrange, meanwhile, is at an all-time high.

"There has been an increase every year, and sometimes twice a year," said Hodges of the number of EOD airmen deploying. "This is the most heavily tasked that we have ever been in my 24 years."

"We have been told we actually should decrease after the next deployment cycle, but it&#8217;s one of those things, I&#8217;ll believe it when I see it," he said.

Weary of deployments, Lundstrom said when his contract is up, "I don&#8217;t know whether I&#8217;m staying in or getting out, but if it [compensation] were to greatly increase, it would definitely sway me to staying in."

But while EOD technicians talk about lucrative paychecks in their field outside the military with fewer risks, they admit it&#8217;s never been about the money.

As Staff Sgt. Michael Overton, 26, an EOD craftsman at Misawa, puts it: "Most people didn&#8217;t join EOD for the money. They joined because they&#8217;re adrenaline junkies."

Notorious photo dogs EOD Marine who was wounded in Iraq

His hearing isn&#8217;t as keen as it once was, and arthritis in his lower back is chronic.

Marine Corps Master Sgt. Michael Burghardt of Fountain Valley, Calif., says it took him a long time to recover emotionally from surviving a roadside bomb in Iraq in September 2005. An explosives ordnance disposal expert, Burghardt was 12 inches from the blast.

Instead of counting his blessings that the shrapnel studded flat against his body instead of tearing through it, Burghardt was wracked by guilt.

The attention generated by the widely circulated photo of him flipping off the triggerman didn&#8217;t help.

Getting recognition "that I survived when I should have been dead made me feel guilty because I had lost &#8230; fellow EOD technicians who &#8230; were my friends," he said. Time and counseling helped him realize "I was still here to tell their story."

Burghardt, the previous EOD chief at Camp Fuji, Japan, until his reassignment in April, can&#8217;t imagine doing anything else, despite three tours in Iraq and the obvious job hazards.

It gives him the opportunity to serve his country, save the lives of others and play the most adrenaline-packed chess game of his life, he said.

The junior EOD Marines keep him motivated, he said. "If I leave, who are they going to learn from?" he said.