Moulton laughs after getting doused with a water hose and champagne. Moulton is leaving for his next assignment as vice commander of 7th Air Force and U.S. Air Forces Korea, and chief of staff for the Air Component Command, Osan Air Base, South Korea. (Megan McCloskey / S&S)

Moulton laughs after getting doused with a water hose and champagne. Moulton is leaving for his next assignment as vice commander of 7th Air Force and U.S. Air Forces Korea, and chief of staff for the Air Component Command, Osan Air Base, South Korea. (Megan McCloskey / S&S) Capt. Mike Jones hands Moulton a bottle of champagne afternoon after spraying Moulton with it to celebrate his last flight as commander. (Megan McCloskey / S&S) 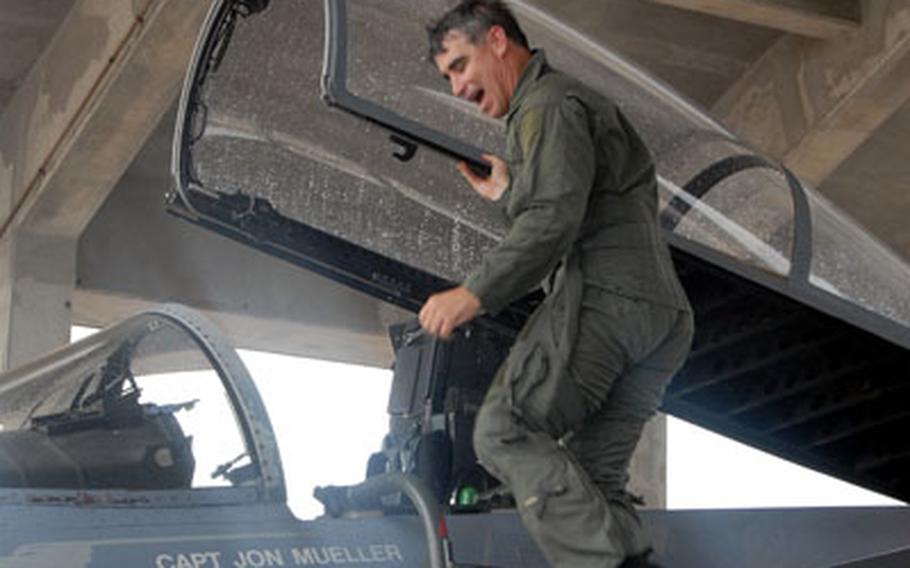 Brig. Gen. Harold "Punch" Moulton climbs down from a jet Friday afternoon after landing at Kadena Air Base, Okinawa, for the last time as 18th Wing commander. (Megan McCloskey / S&S)

He thinks Kadena&#8217;s sometimes tenuous relationship with the local community &#8220;has improved a lot&#8221; during his tenure, he said.

&#8220;There&#8217;s a nature to us having to work hard here on Okinawa to create a solid relationship because of history,&#8221; Moulton said, adding he spent a lot of time talking with the mayors of the three surrounding cities and developing strong personal relationships with them.

&#8220;In a little respect we live in a glass house,&#8221; Moulton said. &#8220;Most servicemembers don&#8217;t look like the local community here in Asia. As a result, we almost instantaneously are recognizable as a servicemember. And so there is somebody watching almost all the time.&#8221;

Kadena often is the target of noise lawsuits and protests. But after what happened on the island in World War II, &#8220;as humans you can only understand the nature of the no-more-war-please kind of ethos that comes out of that,&#8221; Moulton said.

This was Moulton&#8217;s fourth stint in the Pacific and second on the island, having served here previously from 1988-91. Coming back as commander, he said he wanted to ensure there was an evacuation plan for the base given the region is prone to earthquakes and tsunamis.

Moulton said he&#8217;ll take what he learned about the region as Kadena&#8217;s commander to his next post in South Korea as vice commander of 7th Air Force and U.S. Air Forces Korea, and chief of staff of the Air Component Command at Osan Air Base.

One lesson? The Pacific is &#8220;a vast region, a monster region&#8221; that is unique because the United States has to engage nation by nation, which is different from other parts of the world, he said.

&#8220;There is no NATO in the Pacific,&#8221; Moulton said. &#8220;There is no overarching collective body of people all agreeing to defend themselves, and what that means is this is a region of U.S. relationships that is done bilaterally or in very small groups.&#8221;

Moulton said he&#8217;ll also take with him an understanding of the complexities of mobilizing the wing.