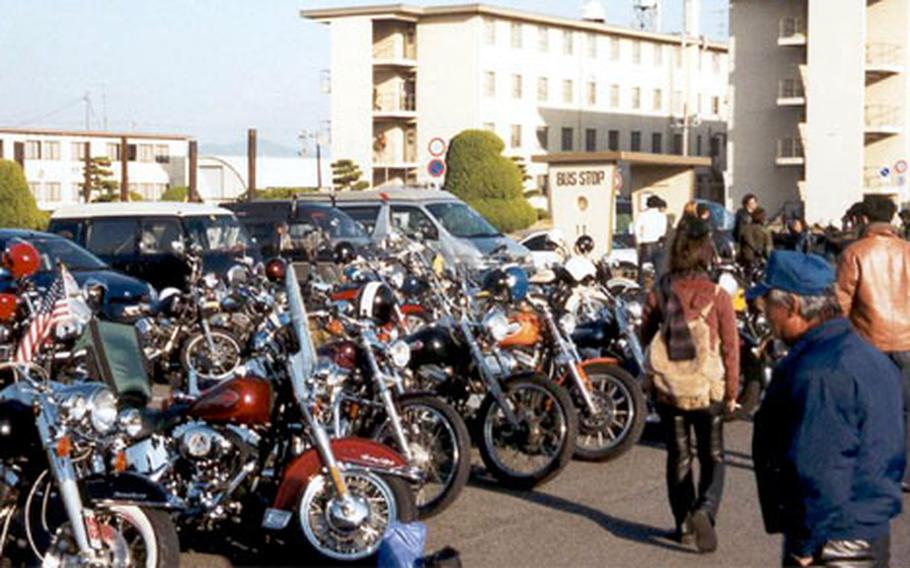 Motorcycles are aligned across the parking area at Iwakuni Marine Corps Air Station’s Hornets’ Nest the day of the 2002 Toys for Tots Thunder Run. The annual event kicks off the campaign to provide donated Christmas presents to children at area orphanages. (Shane Bailey / Courtesy of Iwakuni Single Marine Program)

The early-December roar of about 150 motorcyclists riding caravan-style through the base is the sound that signifies the start of Iwakuni Marine Corps Air Station&#8217;s Toys for Tots campaign.

The annual cacophony &#8212; named the Thunder Run &#8212; takes place at noon on Sunday. About 100 motorcycle enthusiasts in the Japanese community join more than 50 base riders as they cruise the perimeter of the air station.

&#8220;Oh yes, it gets plenty loud. People around here are used to regularly hearing aircraft engines, but this draws even their attention,&#8221; Jay Stovall, Single Marine Program coordinator, said Monday from his office at the SMP facility, the Hornets&#8217; Nest. &#8220;Then we come back here and park the motorcycles and have a great time with a barbecue.&#8221;

One planned highlight is a performance by taiko drummers sponsored by Iwakuni&#8217;s Japan and America Friendship Association.

&#8220;All we ask is that those participating in the Thunder Run, or attending the rest of the afternoon event, bring a new toy, still in its original packaging, with a value of $25 or less,&#8221; Stovall said.

Immediately after the Thunder Run, and before the cookout and entertainment, a short ceremony signifying the start of Toys for Tots is scheduled.

The primary participants are servicemembers involved with the Single Marine Program.

Sgt. Shane Bailey, 23, of Marine Aviation Group 12, has assisted Stovall with Toys for Tots for three years. He&#8217;s excited about his fourth year serving as general coordinator for the program.

Large donation boxes will be at various commands throughout the air station until Christmas, Bailey said.

Last year Iwakuni Marines collected enough toy donations to cover the floor of a racquetball court next to the Hornets&#8217; Nest, Stovall recalled.

Toys for Tots is a worldwide U.S. Marine Corps Reserve program to collect new toys during October, November and December and distribute those toys as Christmas gifts to needy children.

&#8220;It&#8217;s about helping others. When they come back from delivering the presents, you can see it in their faces,&#8221; Stovall said. &#8220;You can just see how their (Marines) self-esteem improves, making them much happier during the holidays.

Call DSN 253-3585 for more information about the Iwakuni Thunder Run and Toys for Tots campaign.