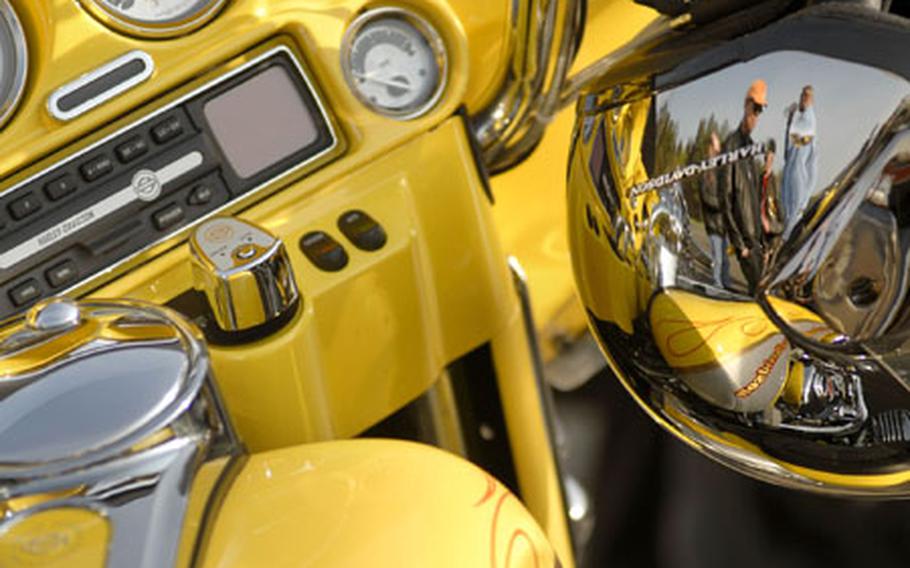 Participants in the Kaiserslautern motorcycle safety day activities are scene on a chrome cycle helmet Friday at Kapaun Air Station. After a morning of training, a bike show and lunch, more than 100 motorcyclists ventured out on a 52-mile mentorship ride. (Ben Bloker / S&S)

Participants in the Kaiserslautern motorcycle safety day activities are scene on a chrome cycle helmet Friday at Kapaun Air Station. After a morning of training, a bike show and lunch, more than 100 motorcyclists ventured out on a 52-mile mentorship ride. (Ben Bloker / S&S) 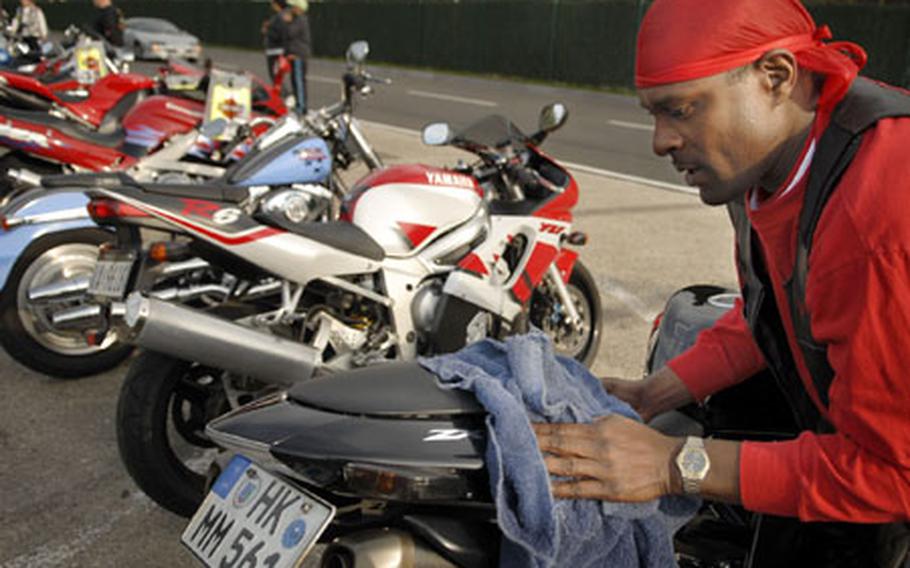 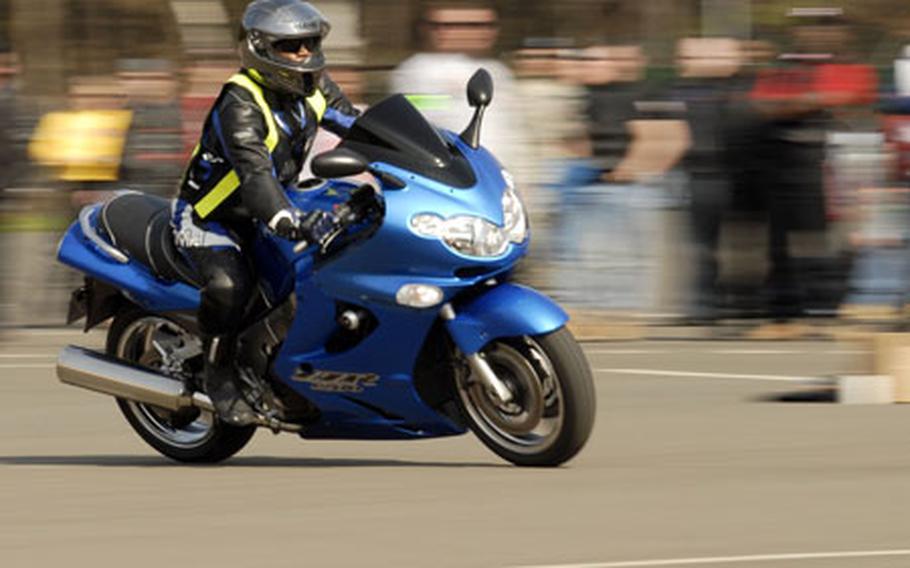 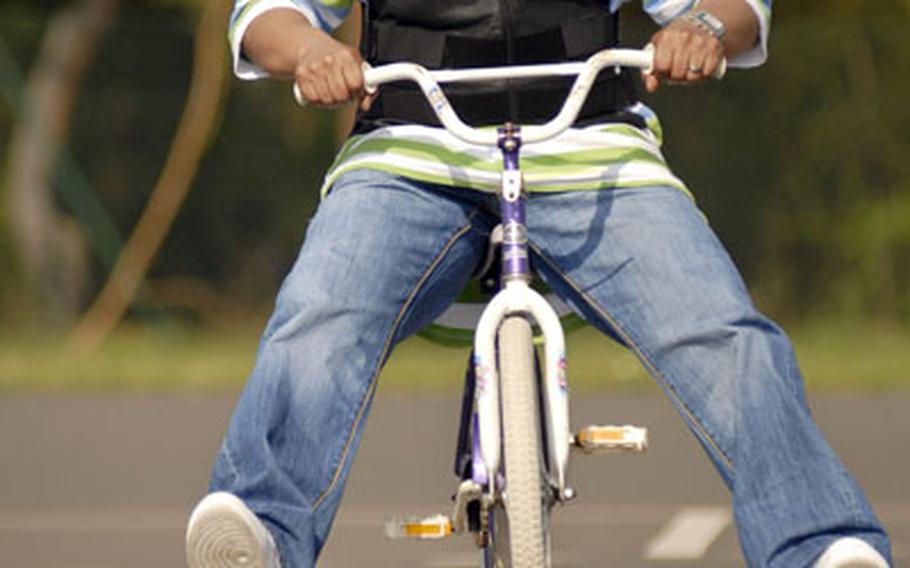 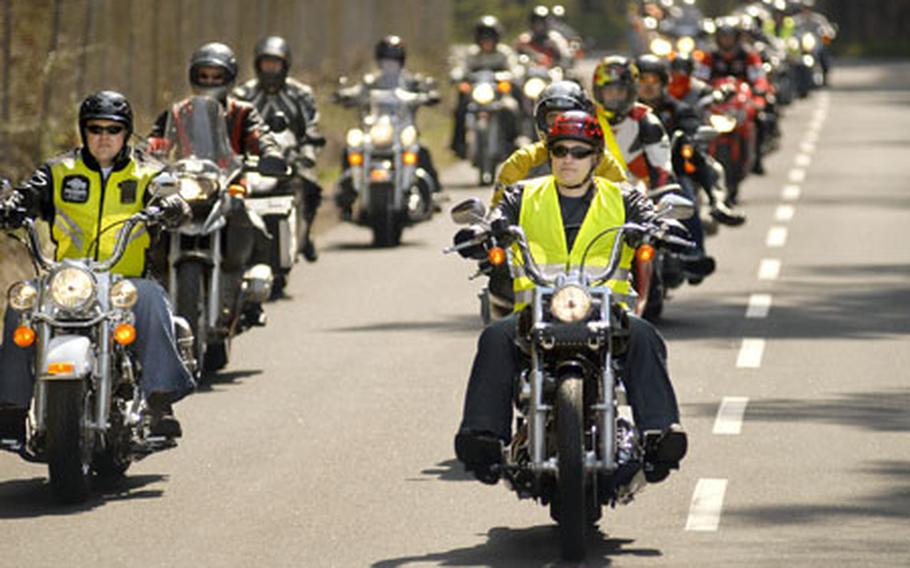 Over 100 motorcyclists from across Germany revved off on their 52-mile mentorship ride Friday starting at Kapun Air Station. The event marks the first time the Kaiserslautern community has organized an event of this size focused on motorcycle safety. (Ben Bloker / S&S)

More than 100 riders &#8212; soldiers, airmen, Germans and even a few Belgians &#8212; gathered at Kapaun Air Station motorcycle course on the most ominous of dates to learn about motorcycle safety and pass along knowledge to new riders.

The event marked the first time that a gathering of so many riders assembled in the KMC to focus on safety. And for good reason.

n Since Oct. 1, 2006, 11 soldiers Armywide have died in motorcycle wrecks. Of those 11 fatalities, all were male, and at least five of them were 30 or older, according to the Army&#8217;s Risk Management Information System.

The statistics help explain why Carlson and other rider coaches spent Friday morning going over the right protective gear and clothing to wear, how to properly brake in an emergency, how to correctly execute a swerve and how to brake in a curve.

Army Master Sgt. Robert Smith, who owns a 2006 Kawasaki Ninja ZX-10R, attended the Kaiserslautern event from Stuttgart with friends. When interviewed and asked how many years he&#8217;s been riding, Smith&#8217;s buddies threw a few verbal jabs.

As Smith said he&#8217;s been riding motorcycles for nine years, a friend yelled out that time on minibikes doesn&#8217;t count.

Smith recovered from the quips and took a serious tone.

Senior Airman Kristopher Carroll and Airman 1st Class Lance Santos, who both are 21 and work on nearby Ramstein Air Base, were at the safety day to meet other riders.

Just last week, Carroll learned some valuable lessons during a Motorcycle Safety Foundation class at Kapaun. Even though he dropped his motorcycle last week while on the course, he was not mad.

In addition to drawing public attention to the fact that with the nice weather more bikers will be on the roads, the purpose of the day was to give less-experienced riders the chance to see seasoned bikers doing the right things.

&#8220;So when less-experienced riders find themselves out there by themselves, they already have a picture of what right looks like,&#8221; Carlson said.