Motivated by an atmosphere of achievement 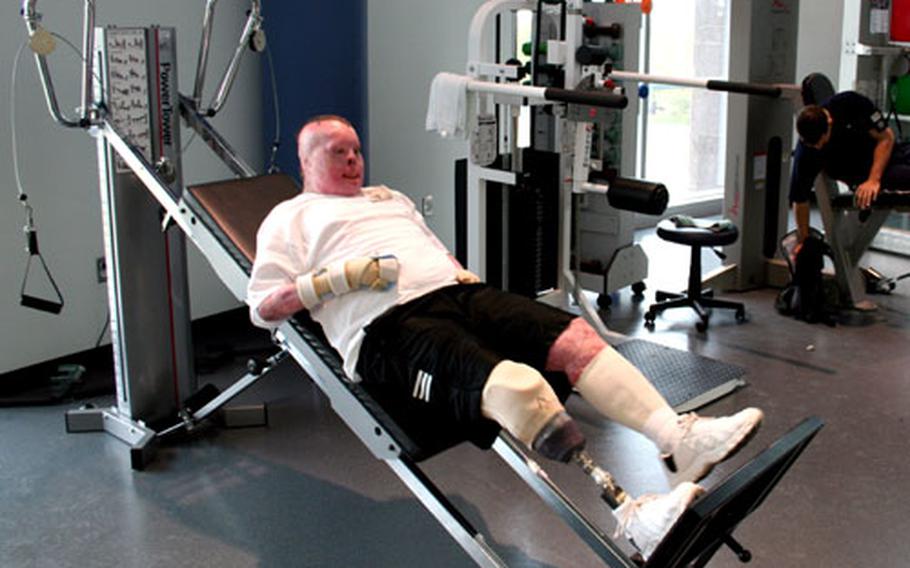 Army. Spc. Richard Yarosh performs squat exercises at the new gym in the Center for the Intrepid. Yarosh lost his right lower leg and suffered burns over 60 percent of his body in when an IED attack in North Baghdad ignited his Humvee’s fuel cell. (Leo Shane III / S&S)

The Center for the Intrepid&#8217;s high-tech resources are great, but Army Spc. Richard Yarosh said the most important feature has been the attitude that staff and patients bring to the new facility.

Yarosh &#8212; dubbed &#8220;Little Ricky&#8221; by staffers urging him to lose a few extra pounds &#8212; has been meeting with trainers at the new center since last summer as part of his rehabilitation.

He spends about 90 minutes a day in the gym, hitting the exercise bike and weight machines, before heading back over to Brooke Army Medical Center&#8217;s main building for another hour of therapy for his wounds.

Yarosh was on patrol in northern Baghdad on Sept. 1, 2006, when his Bradley fighting vehicle was hit by a roadside bomb. The explosion ruptured the vehicle&#8217;s fuel cell and launched him from the gunner&#8217;s seat.

Yarosh rolled into a nearby canal, and nearly drowned before his fellow soldiers pulled him from the water. His Kevlar vest crumbled to ash as medics tried to remove it.

Less than 72 hours later, he was in Texas, badly hurt but alive.

He lost half his right leg and suffered debilitating burns to more than 60 percent of his body. He has only limited use of his hands and arms. And though he has had numerous surgeries, he guesses he still faces as many as 30 more.

Still, he&#8217;s proud of his progress and upbeat about the future.

Already he has delivered speeches about the importance of perseverance to dozens of local groups, including to the Houston Texans just a few weeks ago. He and some friends at the center have talked about starting an inspirational lectures company to share their stories.