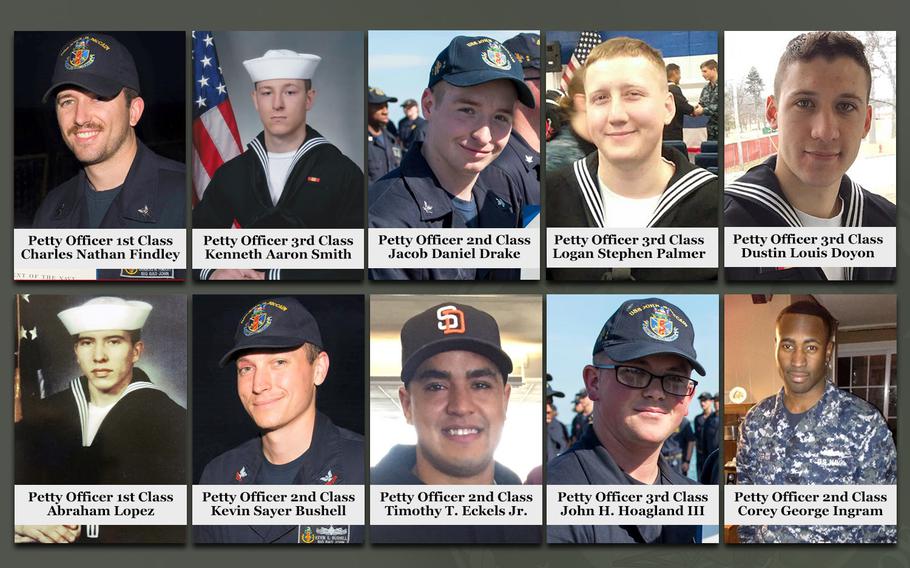 Rachel Eckels, mother of Petty Officer 2nd Class Timothy Thomas Eckels Jr., who died in the collision incident involving the USS John S. McCain, looks on as she is recognized and applauded during a House Committee on Armed Services hearing on Thursday, Sept. 7, 2017, on Capitol Hill in Washington, D.C. (Carlos Bongioanni/Stars and Stripes) 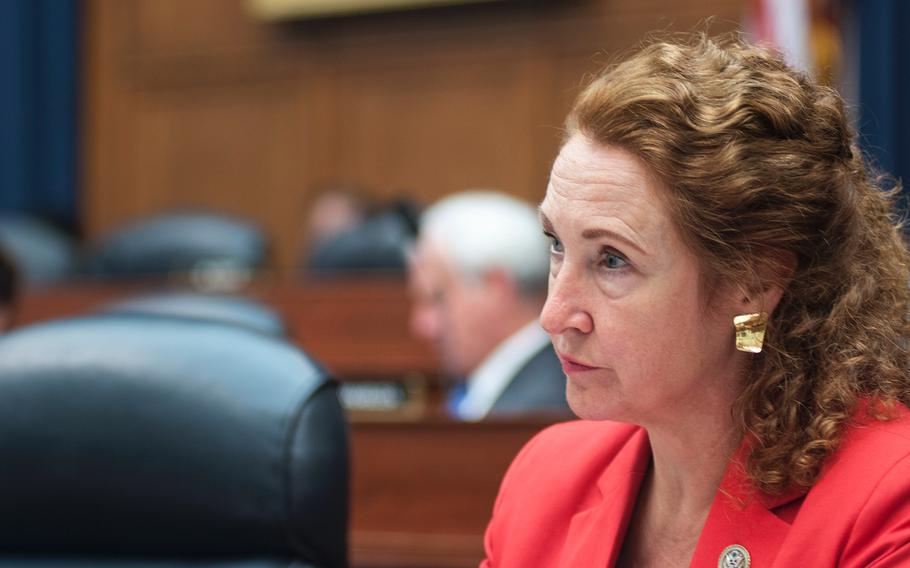 Rep. Elizabeth Esty, D-Conn., attends a House Committee on Armed Services hearing on Thursday, Sept. 7, 2017, on Capitol Hill in Washington, D.C. Speaking of readiness issues facing the U.S. sailors, Esty said, “The notion they are working 100-hour work weeks is very terrifying for them and for us.” (Carlos Bongioanni/Stars and Stripes) 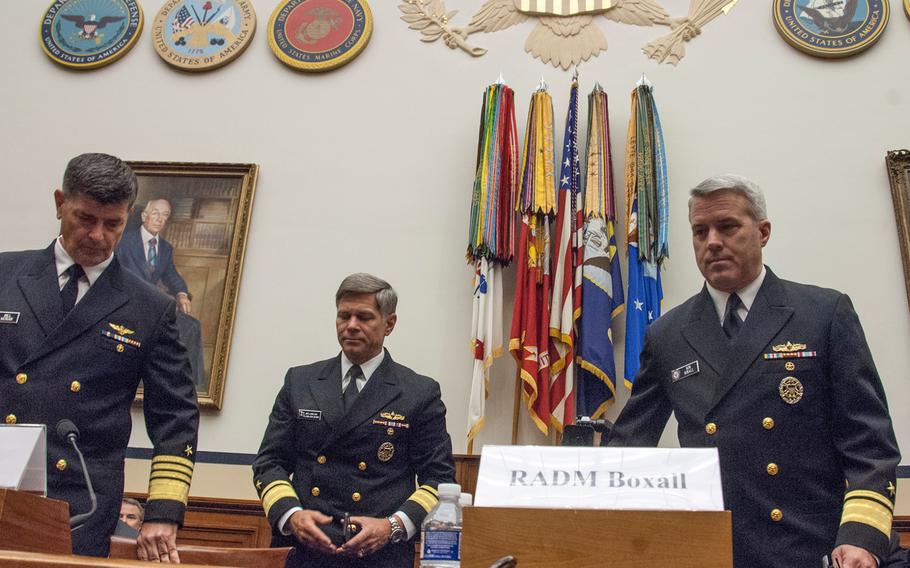 Vice Chief of Naval Operations Adm. Bill Moran, left, and Rear Adm. Ron Boxall, the Navy's director of surface warfare prepare to take their seats before the start of a House Committee on Armed Services hearing on Thursday, Sept. 7, 2017, on Capitol Hill in Washington, D.C. The two high-ranking Navy officials answered questions from lawmakers seeking answers to a spate of naval accidents, some of which involved loss of life. (Carlos Bongioanni/Stars and Stripes)

WASHINGTON — Even as Rachel Eckels sat poised and smiling Thursday afternoon in a crowded and tense congressional hearing room, a long list of urgent and painful questions haunted her.

Nearly three weeks ago, Eckels lost her son, Petty Officer 2nd Class Timothy Thomas Eckels Jr., one of 10 sailors who died when the USS John S. McCain collided with an oil tanker in the Pacific Ocean.

The incident marked the fourth Navy ship to crash this year.

“We just want answers,” Eckels said Friday. “How could this have occurred for the fourth time? We need to know these answers as parents, as mothers, fathers, as citizens.”

The last two Navy ships to crash – the McCain on Aug. 21 and the USS Fitzgerald in June -- proved deadly. Seven sailors perished when the Fitzgerald collided with a cargo freighter off the coast of Japan.

Days after the McCain collision, Vice Adm. Joseph Aucoin, who led the Navy’s 7th Fleet, was relieved of his command. In addition, Navy officials ordered a pause of fleets worldwide and directed a review of surface fleet operations.

Eckels said despite these actions, she is still left wondering whether hacking played a role in the McCain crash. Or was it inadequate Navy funding and training? Or was the operational pause ordered too late?

During a hearing of a House Armed Services subcommittee hearing Thursday, lawmakers pressed Navy Vice Adm. Bill Moran and Navy Rear Adm. Ronald Boxall for more than two hours on many of these questions.

“Each and every one of them promised they would get us answers,” Eckels said of the committee members.

Though there were few answers Thursday, the hearing set the stage for what could be a long, arduous process to get to the bottom of the Navy crashes. For now, the service is conducting multiple probes into the incidents, which could produce results in the coming months.

“You have my promise we will get to the bottom of these mishaps,” Moran told committee members. “We will leave no stone unturned. We will be accountable to you, to our sailors and to the American public.”

A new report presented during Thursday’s hearing found the Navy has been woefully behind on addressing a long list of outstanding and urgent safety and readiness issues.

John H. Pendleton, director of Defense Capabilities and Management for the Government Accountability Office, told committee members at the hearing that the Navy has seen an increase in the number of ships based overseas, crew-size reductions that have contributed to overworked sailors as well as an inability to complete maintenance on time.

For example, the agency said it found more than one-third of needed warfare certifications for Japan-based cruiser and destroyer crews had expired by this summer. The statistics updated previous findings from a May 2015 report.

The Navy has 277 ships, a 17 percent decline from its 333 ships nearly two decades ago, the report noted. Yet, efforts to maintain a robust presence abroad continues despite the growing strains, Pendleton and others noted.

“Years of budget cuts have forced our military to try to do too much with too little,” McCain, chairman of the Senate Armed Services Committee, said in the statement. “We must all do better — Navy leaders must hold our ships to higher readiness standards and request the necessary resources, and Congress must provide the resources required to ensure the safety of our men and women in uniform.”

Previous GAO findings also highlighted the Navy’s longer deployments for sailors, shortened training and reduced or delayed maintenance to meet high operational demands. It also found the Navy has doubled the number of ships based overseas, which has resulted in curtailed training periods.

In addition, it found during a recent 5-year period, maintenance overruns on more than 60 percent of surface ships has resulted in more than 6,000 lost operational days. And in some cases, the agency said, sailors are working more than 100 hours per week, boosting overworking and safety concerns.

“The notion they are working 100-hour work weeks is very terrifying for them and for us,” Rep. Elizabeth Esty, D-Conn., told the Navy officials at the hearing.

For her part, Eckels said she’s staying in touch with other families of the lost McCain sailors. And every two weeks, she will look for answers why their lives were lost.