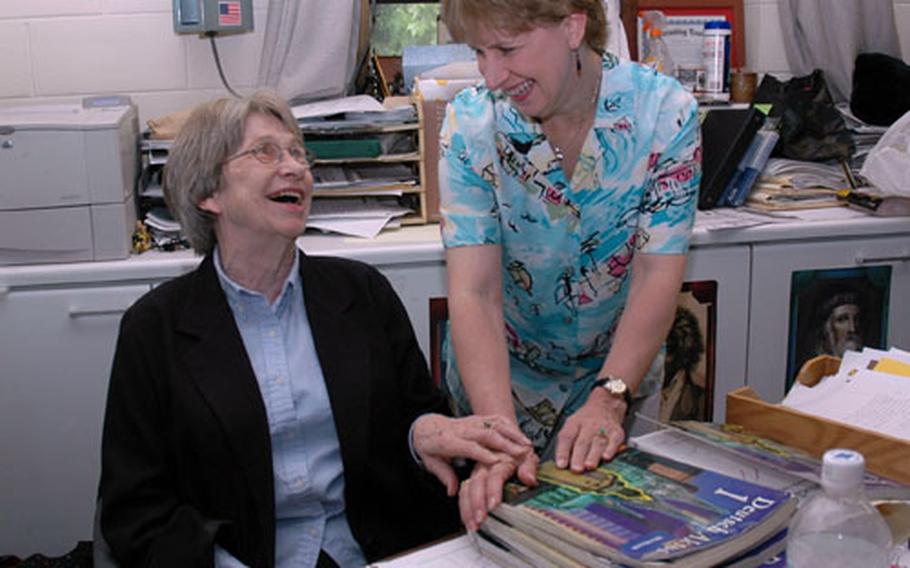 Three decades ago, when Laurie Clark still was in high school, she went on a yearlong exchange program to Norway. That inspired her mother, a school teacher with 20 years of experience, to think about moving overseas.

When Suella Clark took a position with a Department of Defense Dependents Schools in Germany, daughter Laurie went with her and became inspired by her mom&#8217;s lifestyle and the German landscape, language and people. The experience turned her toward language studies and ultimately toward teaching in Venezuela and Taiwan.

So begins a give-and-give conversation between the Clarks. If one hadn&#8217;t moved halfway round the world, the other wouldn&#8217;t have had the opportunity to follow. In between, they both found teaching careers with the military&#8217;s school system. Suella teaches literature and her daughter teaches German language and some English and arts programs.

But for the past three years, they&#8217;ve caught up with each other as teachers at Seoul American High School. This school year, their classrooms are across the hall from each other; Suella even borrows Laurie&#8217;s room for an early-morning section of advanced-placement English.

They enjoy mixing family and work, both Clarks say. Laurie, 45, says she goes to her mother for advice. Suella, 68, says she loves having her daughter so close after more than 21 years in the defense school system.

&#8220;Our biggest problem is that we don&#8217;t get to spend time together,&#8221; Suella said. They confess that they spend so much time in the company of others that most of their mother-daughter time happens the way it does in many families: via e-mail.

So do they live together?

Their family reunion will end this year. Suella is going back to Germany to yet another school to enjoy a few more years in Europe. Laurie says she&#8217;ll miss her mother, of course, but she also can&#8217;t wait to visit her.