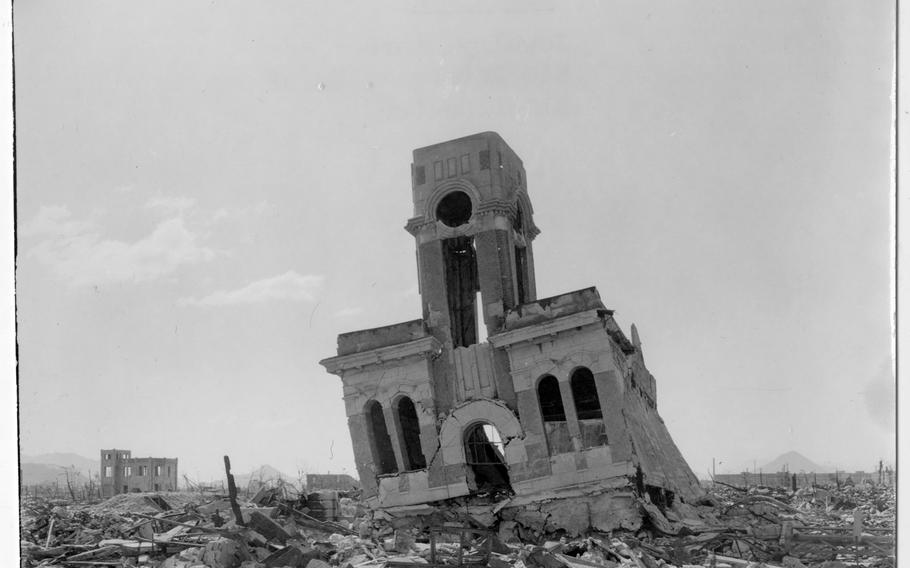 A Hiroshima clock shop in an area currently known as Hondori shopping street is shown in this undated photograph. The shop was located about 620 meters from the location where the atomic bomb was dropped. This photograph is among 36 photographs donated to Hiroshima Peace Museum by Gayle Yoshikawa. (Courtesy of Gayle Yoshikawa)

A Hiroshima clock shop in an area currently known as Hondori shopping street is shown in this undated photograph. The shop was located about 620 meters from the location where the atomic bomb was dropped. This photograph is among 36 photographs donated to Hiroshima Peace Museum by Gayle Yoshikawa. (Courtesy of Gayle Yoshikawa) Aioi Bridge, which was a target for the atomic bomb dropped on Hiroshima on August 6, 1945, is shown damaged after the bombing. The bridge was about 250 meters from the center of the explosion. This photograph was among 36 photographs donated to the Hiroshima Peace Museum by Gayle Yoshikawa. (Courtesy of Gayle Yoshikawa) A mother and daughter from Hawaii have gifted 36 photos taken soon after Hiroshima, Japan, was destroyed by an atomic bomb to the city's peace museum. (Courtesy of Gayle Yoshikawa)

TOKYO — A mother and daughter from Hawaii have given the Hiroshima Peace Museum some never-before-seen photographs taken soon after the city was destroyed by the world’s first atomic-bomb attack.

Gayle Yoshikawa emailed the museum last year asking if it would be interested in 36 images found many years ago above a ceiling at a Honolulu school, said Rie Nakanishi, the museum’s point of contact for queries from overseas.

Yoshikawa said she believed the photos originally belonged to Edith Townes, a science teacher thought to have been involved with the Manhattan Project — a research-and-development undertaking that produced the first nuclear weapons.

But how Townes got the images and why they ended up hidden in the ceiling are still a mystery, Nakanishi said.

Yoshikawa’s mother, Umeyo, was eventually given the photographs. Originally from Hiroshima prefecture, she was evacuated when the atomic bomb was dropped on Aug. 6, 1945.

The Yoshikawas hand delivered the photos to the museum during a visit in March.

“We are thankful that Ms. Yoshikawa thought to donate something that she didn’t take herself but had kept and brought all the way from Hawaii,” Curator Mari Shimomura said.

Shimomura said some of the images show Hiroshima from angles and at times that are different from photos she’s already familiar with.

“There were many that will help us find out the truth,” she said.

For example, Shimomura said one of the new photos captures the wooded framework of a shack being built in front of the remains of an iconic structure now known as the Atomic Bomb Dome.

Shimomura is familiar with a separate photo displaying the same scenery taken in October 1945. That image shows wooden logs piled up that would be used to build the shack. Another photo taken in late November shows the shack’s roof being added.

She thinks the photo donated by Yoshikawa was taken some time in between the other images.

“The shack was for a bicycle shop, which showed that people were rebuilding their daily lives near the center of the bombing site soon after the bombing,” she said.

Shimomura said the museum receives donated photographs from around the world, and that the staff is thankful for all of them.

“The photographs may not be rare or show great findings, but every photograph helps us find details of the bombing,” she said.

“To know that there are those living overseas, despite their nationality, who are interested in the atomic bombing of Hiroshima and are in support of the elimination of nuclear weapons, is encouraging,” she said.