Mosul is still open for business 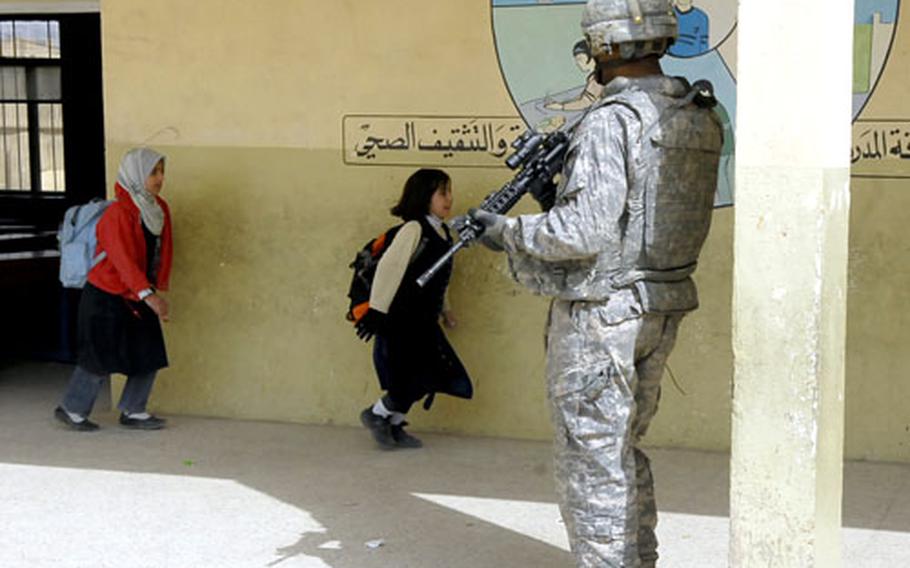 Spc. Walter Hill Jr. stands guard at an elementary school in Mosul during a recent U.S. patrol aimed at assessing infrastructure needs in the city. Much of Mosul lacks basic services like reliable electricity or sewage treatment. (Heath Druzin / S&S)

MOSUL &#8212; On the ghostly boulevards of the Al Shadad district, rusted-out car skeletons rule the road and stray dogs scamper through overgrown lots. Shop fronts have been largely shuttered for more than a year, back when intense battles raged in the street.

Recently though, the clank of hammer on metal has started to replace the crack of gunfire, as business owners slowly return to the once-bustling industrial district. One local shop owner, who stayed open throughout the worst of the fighting in the neighborhood, said customers need to see that the neighborhood is safe again.

"What we need is the businesses to return," he said.

Areas such as Al Shadad are where U.S. forces are fighting the second front of their offensive to push insurgents from this stubbornly violent city. Along with combat patrols, they are pushing for economic development and improved services such as water, sewer and trash collection.

Throughout the day, street corners are filled with crowds of young men with little to do. Unemployment in the depressed city runs an estimated 80 percent. Army Lt. Col. Benjamin Matthews, who oversees operations in eastern Mosul, says putting a dent in that number is one of his top priorities.

Restoring services to Mosul is the other half of the civic effort &#8212; a daunting task, on par with uprooting the determined insurgents who have made the city their stronghold. Power flows for just a few hours a day, clean water is rare, raw sewage runs through the street, and trash piles up everywhere.

Iraqi and American soldiers have been going door to door conducting "census operations," during which they take stock of neighborhood populations and ask residents about safety and services in their areas.

While other major Iraqi cities have been developing civic projects for years, Mosul&#8217;s ongoing violence has left it far behind. U.S. forces are in the very early stages of trying to improve basic services, and Matthews sees in that effort a chance to give a short term boost to employment.

For every local project, such as trash pickup or clean water delivery, he is insisting on hiring local labor only. He said he wants people in the neighborhood to see tangible benefits from the effort.

"There&#8217;s a large work force in every neighborhood ready to go," he said.

Capt. Jay Bradley puts the battle against insurgents and for the trust of this city&#8217;s people in business terms. And he means it quite literally.