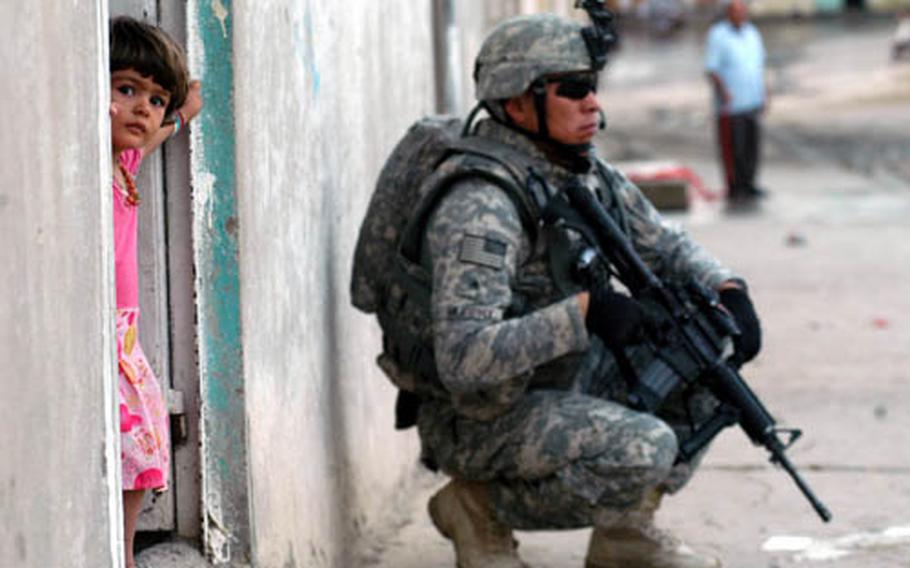 An Iraqi girl peeps out of her door as Sgt. Henry Murphy, 25, of Farmington, N.M., with 3rd Squadron, 3rd Armored Cavalry Regiment, takes a moment to rest during a combined clearing operation in Zanjali, a troubled neighborhood in Mosul. Unemployment continues to be an issue in the northern Iraq city, causing many Iraqis to join the insurgency. (Sean Kimmons / S&S)

An Iraqi girl peeps out of her door as Sgt. Henry Murphy, 25, of Farmington, N.M., with 3rd Squadron, 3rd Armored Cavalry Regiment, takes a moment to rest during a combined clearing operation in Zanjali, a troubled neighborhood in Mosul. Unemployment continues to be an issue in the northern Iraq city, causing many Iraqis to join the insurgency. (Sean Kimmons / S&S) 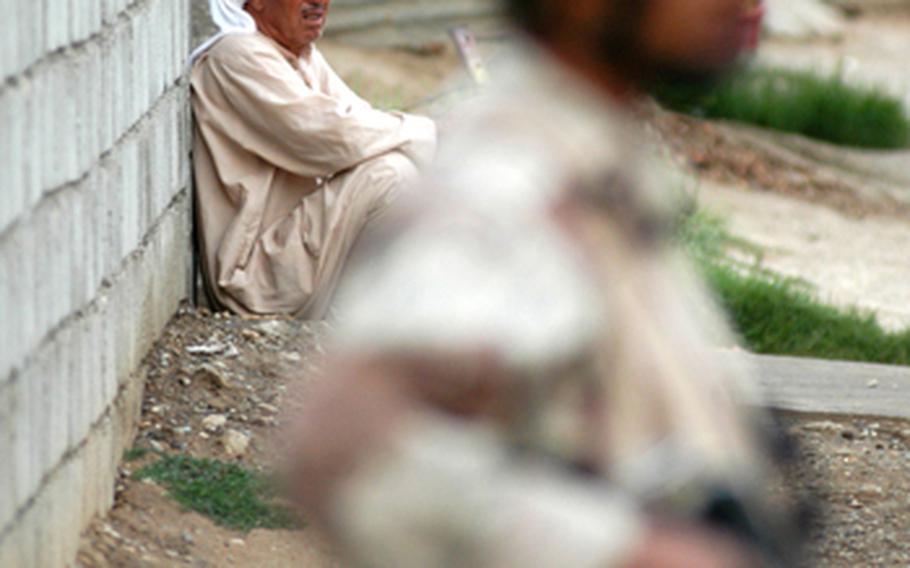 An Iraqi man watches Iraqi army soldiers during a combined clearing operation in Zanjali. Unemployment continues to be an issue in the northern Iraq city, causing many Iraqis to join the insurgency. (Sean Kimmons / S&S) 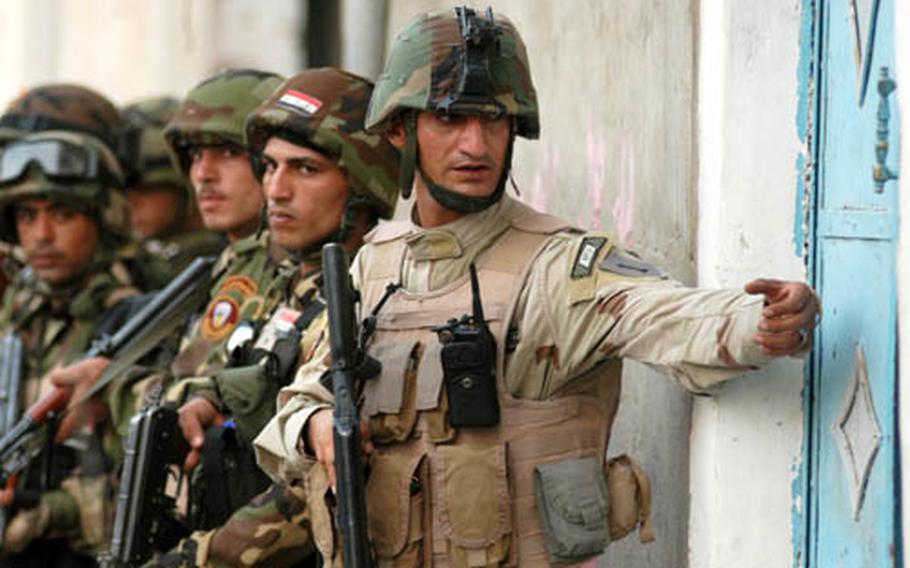 A squad of Iraqi army soldiers line up to search a home as a soldier knocks on the door to get residents to open it so they can enter. (Sean Kimmons / S&S) 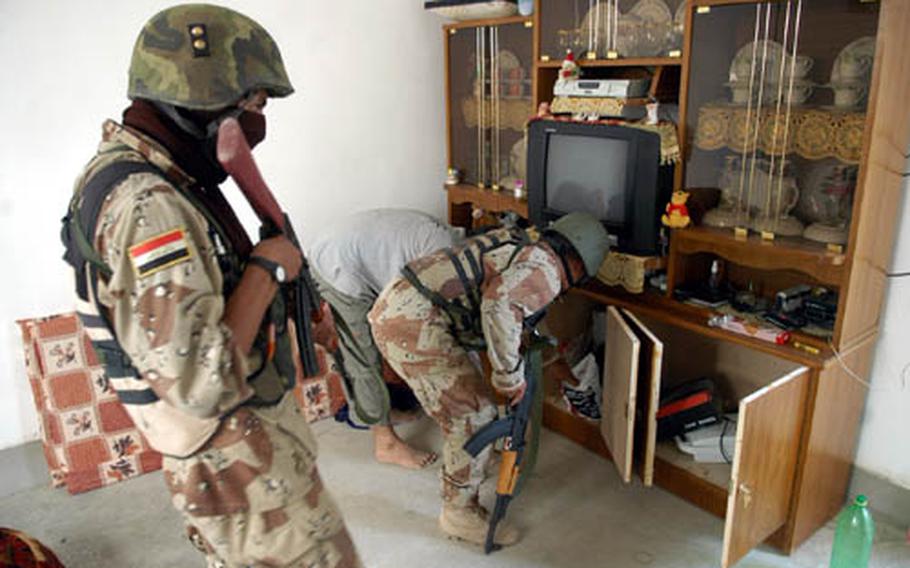 An Iraqi army soldier provides security as another soldier rummages through a cabinet during a combined clearing operation. (Sean Kimmons / S&S) 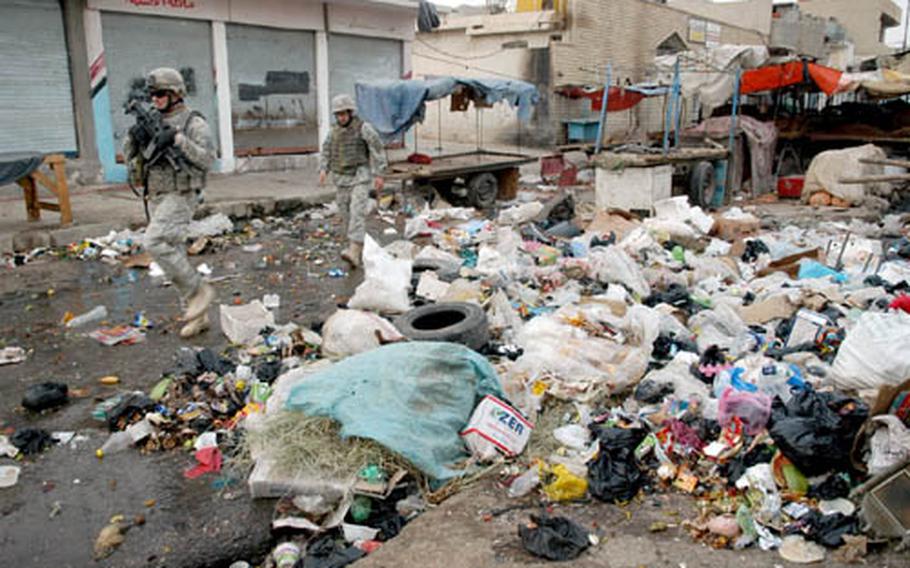 MOSUL, Iraq &#8212; U.S. and Iraqi soldiers blame insurgents for security woes in a troubled Sunni area within this city&#8217;s center. Residents of the area, the Zanjali neighborhood, point their finger at the soldiers for most of their problems.

But both groups agree on why the insurgency has thrived in the city: a weak economy that has produced an unemployment rate of around 75 percent.

Iraq&#8217;s government has been slow to dole out promised funds to Nineveh province, of which Mosul is the capital. Reconstruction efforts have suffered from the lack of money, forcing many Iraqis to turn to insurgency as a means to support families, U.S. soldiers say.

"When you have a strong economy, they are less prone to take on an attack," Feltey, 37, of Kearny, N.J., added.

Besides waiting for the Shiite-led central government to get on track, U.S. and Iraqi forces have continued the slow, deliberate process of clearing Mosul, a predominantly Sunni and Kurdish city of nearly 2 million people.

On Thursday, roughly 1,500 troops, mostly Iraqi, combined for a large-scale operation to root out insurgents in Zanjali, where violence has peaked lately after months of reduced attacks.

Winczewski, 27, of St. Paul, Minn., said that Zanjali is known to be a safe haven for insurgent cells that operate and hide weapon caches there.

Last week, Sgt. Rogelio Mendoza, a squad leader with K Troop, said his unit came under rocket-propelled grenade fire a day after insurgents tossed grenades at their convoy. No one was hurt in either incident, he said.

But soldiers were frustrated at the lack of information they got from residents.

The all-day operation, covering roughly a half-square-mile patch of urban terrain, netted minimal results: a small number of weapons and one target detained. But U.S. soldiers said the operation was a way for the people to see their Iraqi army up close and personal.

"It gives confidence to the Iraqi people that the Iraqi army is here to help," Winczewski said. "And hopefully they&#8217;ll give the soldiers information [on insurgents]."

Dawood Abdullah Yousif is unemployed and barely scrapes by with the provincial government&#8217;s unemployment pay of 250,000 dinars (about $210) every two months.

Yousif and other residents believe low pay has contributed to insurgency in the area. Many households have to support six or seven children with limited ways to do so, he said.

A pharmacy owner who refused to provide his name out of fear of retribution said that supporting small businesses is one way to quell violence.

"The government has to figure out a plan for investments and small companies," he said. "The security depends on the economy. If the economy grows, security gets better."

Mosul has received $39 million in reconstruction funds via a Multi-National Force-Iraq initiative that uses Iraqi money for Iraqi problems, instead of American funds as in the past, Feltey said.

Yet, the province is missing hundreds of millions of dollars to which it is entitled, he added.

"It takes money to jump-start those programs to employ the masses," Feltey said.

Basic services, such as water, electricity and garbage disposal also suffered, he said.

"Once budget and reconstruction funds begin to flow, security will improve even more," he said.

In May, a massive operation dubbed Lion&#8217;s Roar stabilized much of the city, which was controlled by insurgents. Clearing operations are still an ongoing tactic in the heavily populated city.

"This will continue until we clear the whole city," Col. Michael A. Bills, commander of 3rd Armored Cavalry Regiment, said of the operations. He added it&#8217;s hard to estimate when that will be.