National Police member Amer Kadim Gasim, who is from Baghdad, rests during a recent patrol through Samarra, Iraq, while U.S. commanders talk with locals. The mostly Shiite force, working in an all-Sunni town, runs into problems with even the most basic matters, like getting food. (By Ben Murray / S&S)

National Police member Amer Kadim Gasim, who is from Baghdad, rests during a recent patrol through Samarra, Iraq, while U.S. commanders talk with locals. The mostly Shiite force, working in an all-Sunni town, runs into problems with even the most basic matters, like getting food. (By Ben Murray / S&S) Iraqi National Police members walk through an alley in Samarra, Iraq, on a joint patrol with U.S. forces from Patrol Base Olson on the edge of the city. (By Ben Murray / S&S) 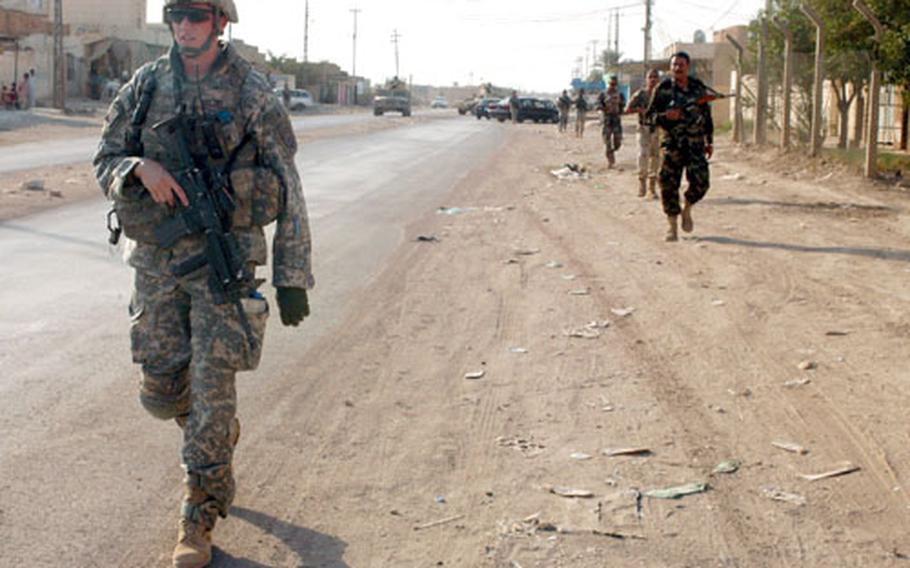 SAMARRA, Iraq &#8212; On paper, it sounds pretty good: a battalion of Iraqi commandos hunkered in the middle of the restless city of Samarra, sent north from Baghdad to keep the peace.

A mostly Shiite force in an all-Sunni town, it sounds like an intimidating strike team sitting right in the hive, ready to pounce on insurgents as they rise from a city known for violent tendencies.

To get their supplies, police generally just bring cash with them to purchase goods wherever they go &#8212; a tactic that has all but failed them in Samarra, said Crosbie, who is with the Joint Multinational Readiness Center based in Hohenfels, Germany.

Some vendors are hesitant to sell them even the simplest things a security force needs because they&#8217;re a Shiite unit in a Sunni town, said the Samarra transition team deputy chief, Capt. Geoffrey Farrell, 30, from Warrensburg, N.Y.

The National Police is designed to be a quick-response team based out of Baghdad that could be sent to any hot spots around the country.

Part of the force&#8217;s problem is its youth. The first vestiges of the National Police were established in 2004 from former Baghdad-based &#8220;commandos,&#8221; which leaves them &#8220;well behind&#8221; the Iraqi army in terms of organization and sophistication, Crosbie said.

The force also underwent a massive purge earlier this year when thousands of officers and administrators were fired for corruption or failure to perform their duties.

During the mass firings, the 3rd Battalion, 3rd Brigade, 1st Iraqi National Police Division was already in Samarra, where it was handed a particularly difficult mission as a result of the religious division between the police and local citizens.

&#8220;You can tell that the population does not want them here. They are very skittish when the National Police are around,&#8221; Crosbie said.

It isn&#8217;t hard to see why. In February, Samarra was the site of the infamous Golden Mosque bombing that ignited a firestorm of sectarian violence in Iraq.

In response, the transition team did what it was designed for &#8212; showed up as a back-up force in an area where violence had overcome local police &#8212; and became a mainly Shiite presence in the city just weeks after the bombing.

To complicate matters, the religious tension also creates friction between the National Police members and the mostly-Sunni local police. Though the two forces have worked well together on individual missions, they don&#8217;t tend to mix well in long-term interactions, Crosbie said.

In public, local citizens are intimidated into saying they hate the National Police, and refuse to give information for fear of repercussions, said National Police member Amer Kadim Gasim, through an interpreter. But in private, he said, their attitude is different.

Despite the litany of issues, the police are making strides, said Samarra transition team member Capt. Lance Fountain, 26, a platoon leader from the 230th Military Police Company in Kaiserslautern, Germany.

But they have a long way to go. On a recent patrol, members of the National Police strode out of their base in the city alert and in formation, guns at the ready. Within an hour, however, most were just shuffling along, holding their AK-47s by the stocks and clips, or hanging them off their shoulders.

The solution, according to Crosbie, is simple training. Not on-the-job training, but intense learning sessions somewhere out of the line of fire.