Most eligible expatriates don't vote in US elections, study finds 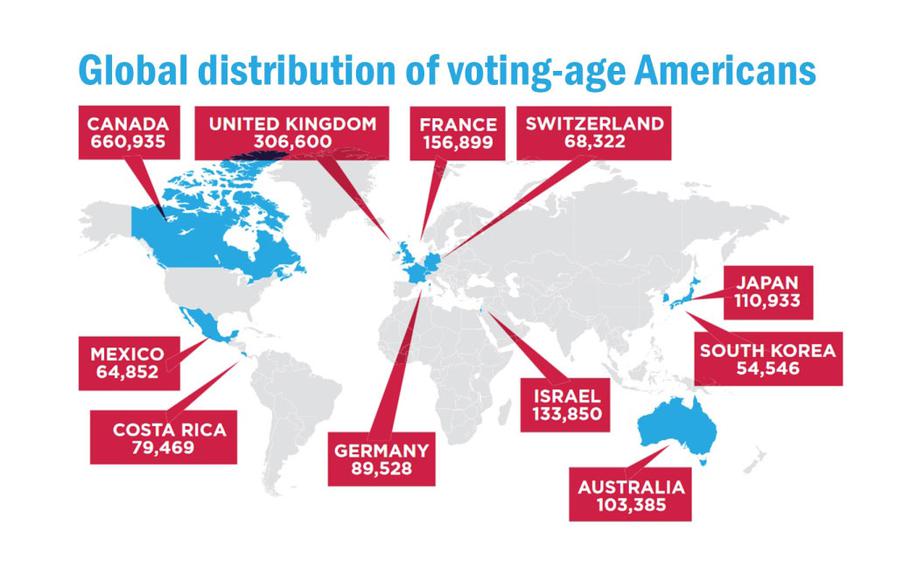 A study released Wednesday, described as the first of its kind, has found what political scientists have long suspected: Most American expatriates don’t vote in U.S. elections.

The study by the Federal Voting Assistance Program found that voting rates for all estimated 2.6 million eligible overseas voters, excluding servicemembers and their spouses, was 4 percent in 2014.

“While we can expect to see an increase in the overall voting rates for the 2016 presidential election, we need to understand whether the overall rate for 2014 is due to low awareness of how to vote absentee or if it is related to other factors,” FVAP Director Matt Boehmer said in a news release.

The top three reasons for not voting, according to a group of citizens abroad FVAP surveyed, were difficulties with absentee voting, feeling out of touch with the national or local community and no candidate preference, according to the study, which FVAP said was the first of U.S. expatriates’ voting behaviors.

Trying to suss out voting rates for that group is a challenge largely because there is no comprehensive list of all U.S. citizens living overseas.

FVAP used data from foreign countries, U.S. government administrative sources and academic studies to estimate the number of Americans eligible to vote in countries around the world.

It then calculated overseas voter turnout rates by country using those eligible voter estimates and 2014 ballot requests and submissions from overseas voters, information gleaned from the States.

FVAP, a part of the Defense Department whose aim is to aid troops, family members and overseas citizens in voting from anywhere in the world, found in its study that overseas citizens were highly educated, with nearly half holding graduate or professional degrees and a third holding bachelor’s degrees. Their average age was 49.

Both age and education are usually associated with high voter turnout. But experts have long believed that expatriates vote at low rates because their ties to the U.S. and community issues are more tenuous.

The expatriates had been living abroad, on average, for nearly 14 years, the study found. Forty-three percent were dual citizens.

U.S. voters living overseas can visit FVAP.gov for their state’s specific voter registration and ballot request deadlines, as well as tools and information for completing a Federal Post Card Application (the voter registration and ballot request form) or the Federal Write-In Absentee Ballot (the backup ballot). Voters can fill out the forms by hand or use the online assistant before they print, sign and send them to their election office.