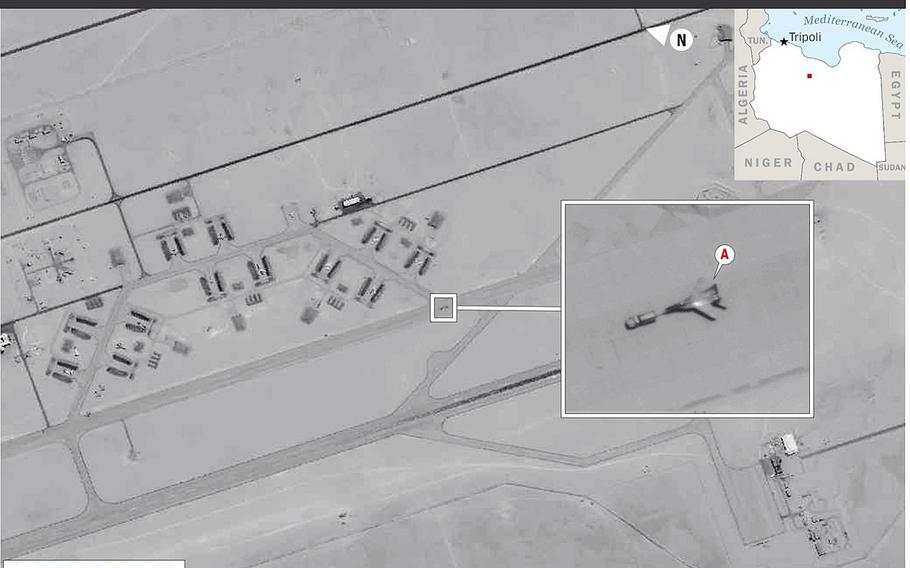 U.S. Africa Command says this photo it released shows a Russian MiG-29 jet at Al Jufra Airfield, Libya, on May 19, 2020. Top U.S. generals say Russia is aiding a warlord and could be trying to gain a long-term foothold in Libya, which would create security concerns for southern Europe. (AFRICOM)

STUTTGART, Germany — Russia has flown warplanes to Libya in a move aimed at propping up a warlord and possibly gaining a permanent foothold in the war-torn country, the U.S. military said Tuesday.

A proxy war is playing out in Libya between numerous nations, including Russia, which has mercenaries on the ground lending support to the Libyan National Army led by Khalifa Hifter.

“The Russian fighter aircraft arrived in Libya, from an airbase in Russia, after transiting Syria where it is assessed they were repainted to camouflage their Russian origin,” U.S. Africa Command said Tuesday in a statement.

At least 14 Russian aircraft were sent to Libya, including MiG-29 Fulcrums and Su-35 Flankers, AFRICOM said in a response to a Stars and Stripes query.

The deployment also raises other concerns for U.S. military leaders, who say Russia is pursuing strategic goals unrelated to “what is best for the Libyan people.”

Libya has been in chaos since the NATO-led intervention in the country in 2011, which led to the overthrow of strongman Moammar Gadhafi. Militias have fought for control while the internationally recognized government in Tripoli struggles to assert itself.

While the U.S. and other countries such as Turkey back the Government of National Accord, Moscow has sided with Hifter.

“Russia is clearly trying to tip the scales in its favor in Libya,” AFRICOM boss Gen. Stephen Townsend said in the statement. “Just like I saw them doing in Syria, they are expanding their military footprint in Africa using government-supported mercenary groups like Wagner.”

Townsend said Russia has long denied the extent of its involvement in the Libyan conflict.

“Well, there is no denying it now,” Townsend said. “We watched as Russia flew fourth generation jet fighters to Libya — every step of the way.”

Neither Hifter’s army nor private military companies can arm, operate and sustain the aircraft without Russian state support, AFRICOM said. Russia has employed the state-sponsored Wagner Group in Libya to conceal its direct role, the statement added.

In recent weeks, fighting in Libya has intensified. There have been media reports that Hifter’s forces have faced setbacks because of an increase in military support from Turkey for the Western-backed government.

In April 2019, Hifter’s offensive on Tripoli forced the U.S. to pull a small cadre of troops out of Libya.

However, the U.S. continues to routinely conduct surveillance operations in Libya in coordination with the national government.