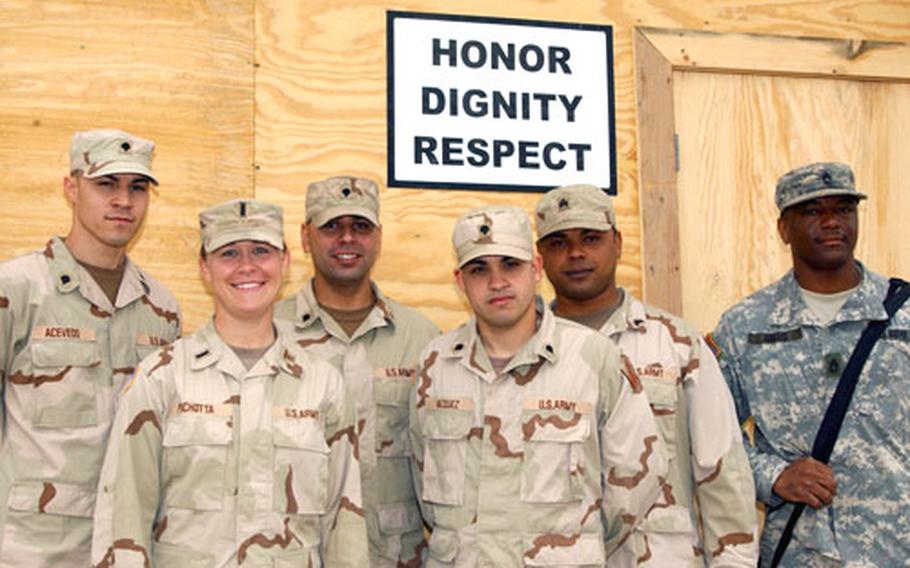 For members of the 311th Quartermaster Company, the sign epitomizes how they treat fallen U.S. troops as they help them on their way home.

Members of the mortuary affairs team said they always carry the remains of U.S. troops feet first, as if the dead could walk for themselves. In another token of respect, the members of the team march the remains of fallen troops between an honor cordon of about 40 troops who salute as the remains pass by, said Sgt. Carlos Colon, 24.

Fallen troops also get one final salute once they have been loaded aboard an airplane, said Colon, of Patillas, Puerto Rico.

The remains of all servicemembers who die north of Baghdad come to Camp Anaconda for processing, said Lt. Tracia Pichotta, 27, of the 400th Quartermaster Company. Pichotta, of Erlanger, Ky., is the officer in charge of Camp Anaconda&#8217;s mortuary affairs team.

She said team members are on call 24 hours a day and live in the area where they work.

In March, the team processed from one to five people&#8217;s remains per week, said Sgt. Freddie Adams, 36, of Logistics Task Force 548, from Forrest City, Ark.

Colon said March was the slowest month for the team since they arrived in Iraq more than six months ago. In fact, it was the least deadly month for U.S. troops in Iraq since February 2004.

Colon said the members try to clear their minds before they start processing remains.

Members of the team said the hardest part of the job is finding pictures of fallen troops&#8217; loved ones while tending to their remains.

Spc. Jose Ortiz, 30, said that makes him think of his own family.

Members of the team said they take a sense of personal satisfaction and pride at doing their job, but that doesn&#8217;t mean they are eager to do it all the time.