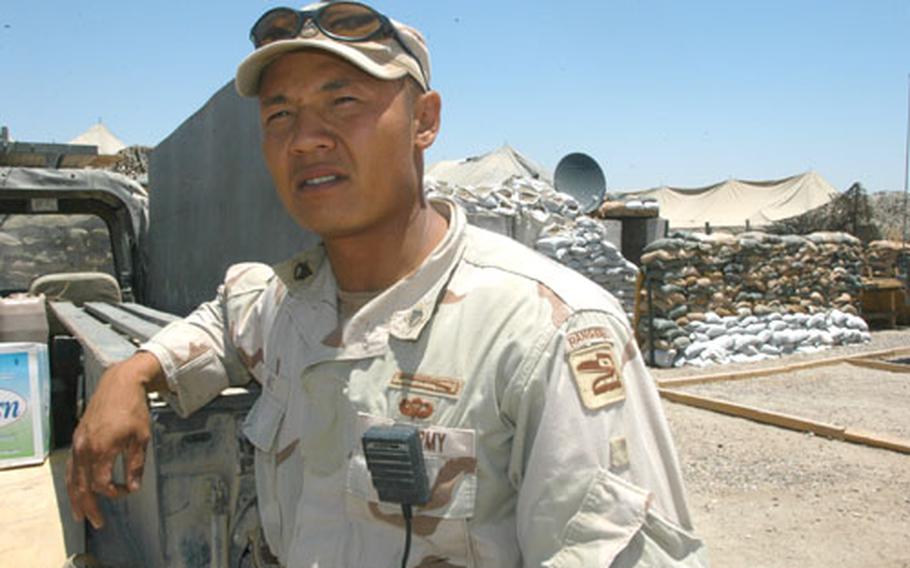 Staff. Sgt. Nate Hays stands beside the spot where his friend Spc. Daniel Unger was killed by a mortar at Camp Kalsu, Iraq. (Rick Scavetta / S&S)

CAMP KALSU, Iraq &#8212; It&#8217;s hard to sleep in a tent that has shrapnel holes in the canvas, especially when you know your buddy died just outside, one soldier recently said.

The comment by Cpl. Phillip Haworth, 25, of Fresno, Calif., at a remote camp south of Baghdad, echoes many living on bases throughout Iraq.

Insurgents lob mortar rounds and launch rockets at U.S. camps throughout Iraq almost daily. It can happen at any time at any camp. Wednesday, a rocket hit the PX at Balad, killing three troops. Even the coalition&#8217;s headquarters in Baghdad, known as the Green Zone, comes under frequent attacks.

When Camp Kalsu was struck with more than 40 mortar rounds in five attacks last month, it was business as usual.

But on the afternoon of May 25, hell rained down. That day, insurgents fired nearly a dozen explosive shells on the soldiers&#8217; living quarters.

Spc. Daniel Unger, 19, a preacher&#8217;s son from Exeter, Calif., died a few feet from the bunker he was running toward, Haworth said.

That day, Unger was supervising Iraqi workers on base. When the first round struck, he shuffled the local laborers to safety first, his buddies said. The third round landed about 10 yards from where Unger fell, they said. A chunk of metal ripped through his torso.

Lying on the ground, Unger cried out.

Staff Sgt. Nathan Hays and Staff Sgt. John Bustillos ran to him while rounds continued to explode around them. Unger lay on his belly with blood pooling near his armpits, as his face went pale white, Hays said.

They knew there was little they could do to save their soldier. Still, they checked out his wounds and tried to comfort Unger.

Two Vermont National Guardsmen, Spc. Alan N. Bean Jr. and Sgt. Kevin F. Sheehan, also died in the attack. They were escorting a team of interrogators to the base and were killed when a round exploded near the entrance to a bunker, said Lt. Col. Randall Twitchell, commander of the 95th Military Police Battalion. Four other Vermont troops were seriously wounded, he said.

The camp, named for football star Bob Kalsu, who was killed in Vietnam, is surrounded by farmland and small villages.

Unger&#8217;s unit, the 1st Battalion, 185th Armor Regiment, a National Guard unit from San Bernadino, Calif., became a provisional infantry unit in Iraq. Their job is to protect the tiny base that military police and cavalry use to stage patrols on nearby supply routes.

Ever since the attack, the troops don&#8217;t feel safe on the base, they said. They would rather be outside the wire on patrol, where at least they can fight back.

It&#8217;s not just the troops being targeted. Locals who work on base have been murdered, soldiers said. They talk about the &#8220;water truck guy&#8221; who did not show up for work recently. Fellow Iraqis said he was executed for working with Americans, soldiers said.

After the attack, the Army dispatched a fire-finding radar to the camp to pinpoint where a mortar round was launched from, and thus, locate the insurgents position. So far, troops have had no luck tracking down those responsible for the attacks.

The enemy has attacked recently with rockets, which the men say are less accurate. Meanwhile, catching those responsible for their friend&#8217;s death is not easy, Haworth said.

Spc. Daniel Unger&#8217;s friends described the infantryman as a good kid from a small town in Northern California who never swore and carried a stack of Bibles with him.

On his chest, Unger had the word infantry tattooed above crossed rifles, said Cpl. Phillip Haworth.

Unger, who was killed May 25 in a mortar attack, turned down a college baseball scholarship to serve in the infantry. He joined the Army National Guard at age 17, while still in high school. After one weekend drill with his unit, they were mobilized for Iraq, Haworth said.

He was always trying to make people laugh, his friends said. They play a video of Unger goofing around in the Kuwaiti desert with an inflated latex glove over his head. They also have footage of him in pursuit of Iraqi insurgents and firing his machine gun.