Mortars are a constant presence at FOB Loyalty 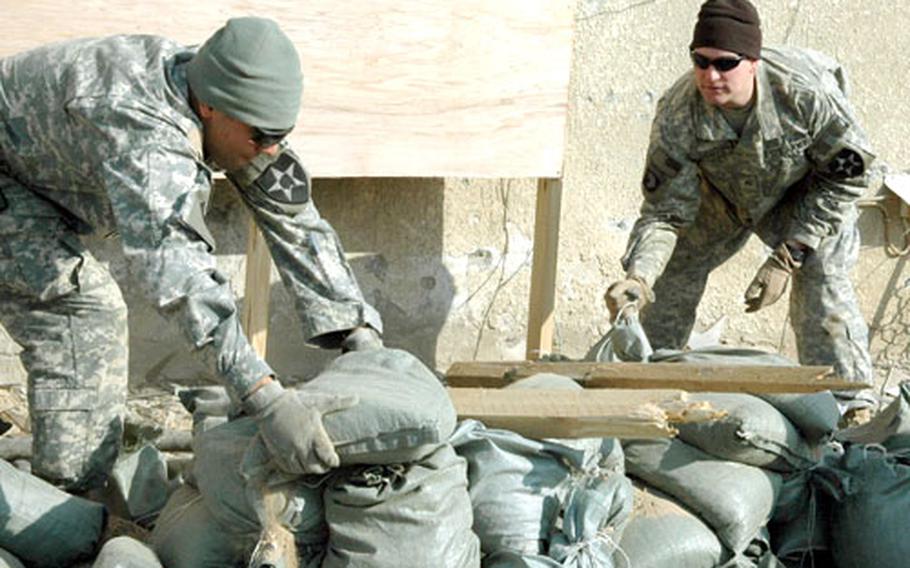 FORWARD OPERATING BASE LOYALTY, Iraq &#8212; The soldiers were eating their chicken fingers in the chow hall and watching Terrell Owens tell ESPN why the Dallas Cowboys got pounded by the Philadelphia Eagles when the first mortar hit.

Then the second mortar hit. Closer this time.

Outside the window, people were running for shelter.

Inside the dining facility, or DFAC, as soldiers call it, troops were putting on the heavy body armor and Kevlar helmets they had shed for their evening meal.

There was little visible fear, but many looked frustrated or confused. One young blond soldier&#8217;s mouth twisted in a snarl as he jammed his helmet on his head and locked the snap on the strap with one hard punch.

Four more mortars fell on FOB Loyalty in Baghdad at 6:15 p.m. Tuesday, for a total of seven shells.

The mortars &#8220;were big ones, 120 mm,&#8221; with a burst radius of 75 feet, said Sgt. Luke Draper, 25, a mortarman from Long Beach, Calif., who works for Headquarters and Headquarters Company, 2nd Brigade Combat Team, 2nd Infantry Division, and helped repair the damage.

No one was injured in the attack, according to base spokesman Maj. Sean Ryan, although Draper said an executive officer and a first sergeant had a very near miss.

The XO and first sergeant had just gone outside to inspect a container that soldiers had prepared earlier in the day, Draper said.

Then the attack began.

But the soldiers got through the attack with nothing more than scratches, Draper said.

The mortars knocked out power and water to one building and shattered several windows, including those in soldiers&#8217; living quarters. Shrapnel blasted through at least one air-conditioning unit into a soldier&#8217;s room.

FOB Loyalty is based where Saddam Hussein&#8217;s old secret service (Mukhabaret) had its headquarters and campus. Sadr City is next door.

The neighborhood is, to put it mildly, unfriendly. Insurgents have made their feelings clear since Nov. 1, the day the brigade arrived from Fort Carson, Colo., when a mortar attack wounded several soldiers, one severely enough that he had to go stateside.

Since then, it&#8217;s been more or less a constant barrage of mortars, with attacks varying from one or two 81 mm shells to a recent record of 16 bigger shells about two weeks ago.

The brigade takes steps to protect its soldiers. The tracking is so good the brigade&#8217;s intelligence officers knew almost immediately where Tuesday&#8217;s shells came from.

Catching the shooters is tough because they &#8220;shoot and scoot,&#8221; Ryan said. The mortars can be launched from mobile platforms &#8212; such as cars or trucks &#8212; and then the insurgents can disappear into the maze and no man&#8217;s land that is Sadr City, abandoning the vehicle as they go.

The soldiers of FOB Loyalty say the trick is to stay indoors during the most dangerous hours and wear their body armor correctly.

Draper, walking beside him, laughed in recognition.