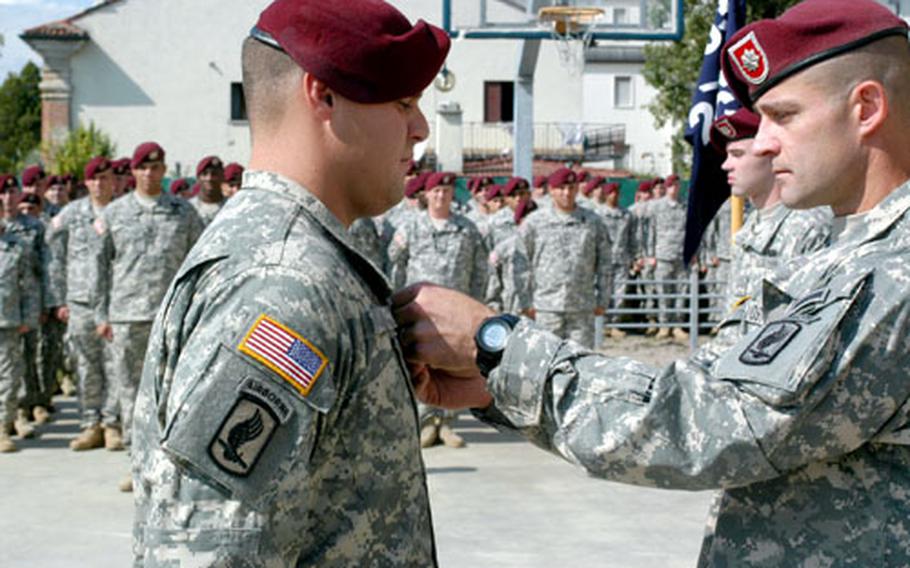 VICENZA, Italy &#8212; During the 2nd Battalion, 503rd Infantry Regiment&#8217;s recently concluded tour in Afghanistan, there was no more dangerous place on a U.S. compound than the mortar pit.

That&#8217;s where U.S. soldiers would launch devastating counter attacks if enemy forces fired on the base.

And as a result, "They (the mortar pits) were always targets," said Lt. Col. Bill Ostlund, the battalion commander. "Because they&#8217;re what kept [the enemy] off the bases."

Ostlund said soldiers from the 28-member Mortar Platoon from Headquarters and Headquarters Company have received 41 valor awards for their actions in Afghanistan, including three Bronze Star Medals with valor.

On Wednesday, the platoon received its second Silver Star.

Ostlund pinned the medal on Staff Sgt. Christopher Upp in a ceremony on a Caserma Ederle basketball court next to one of the barracks.

"In 25 years, this is the first opportunity I&#8217;ve had to present a Silver Star to a soldier," Ostlund told soldiers from the company and other elements of the 173rd Airborne Brigade Combat Team gathered around the court.

Upp, a 27-year-old from Sterling, Colo., was on his second deployment to Afghanistan with the platoon and fourth tour downrange overall. He was assigned to Vehicle Patrol Base Seray in the Chowkay Valley on July 31, 2007.

Upp said the first memory that pops into his mind of that day is the mortar round that hit near the mortar pit &#8212; killing 1st Lt. Benjamin Hall.

"A great officer was killed," he said, lifting the Silver Star Medal pinned to his uniform. "This is for him really."

Upp led a small group in a charge toward the pit. They were targeted by machine-gun fire and rocket-propelled grenades along the way. More than once, they were knocked to the ground by rocket-propelled grenades that landed close to them. Once they got to the pit, another RPG damaged the tripod that supports the 120-millimeter mortar, and shrapnel tore a large gash in Upp&#8217;s left forearm. The wound would eventually require 17 stitches.

With the mortar support damaged, Upp had to use his hands &#8212; and shoulders when the tube got too hot &#8212; to guide the return fire. He fired 75 rounds back at enemy positions, enduring constant machine-gun fire.

Upp said he remembers much of the battle from a third-person perspective.

Upp, recently married, said he&#8217;ll now join the SETAF staff, keeping him in Italy &#8212; and away from any mortar pit for at least a while.