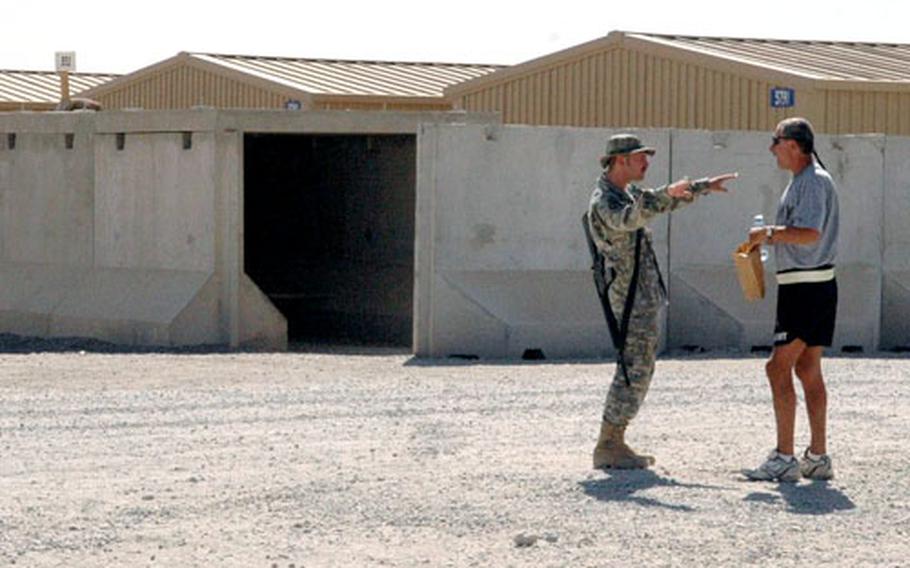 KANDAHAR AIRFIELD, Afghanistan &#8212; The first thing Sgt. Ken Moore did when he heard the two mortar rounds slam into camp was sprint for his unit&#8217;s bunker.

Once he got there, he wished he had remembered his PlayStation.

He said after the first few attacks, all of the fear seemed to slip away.

Troops use that mixture of safety instincts and dark humor to handle the frightening reality of life in a combat zone. Mortar and rocket attacks, which had almost been a daily occurrence earlier in the month, have now become a social hour of sorts for some units, as commanders count heads to make sure everyone has survived.

Usually everyone does. Only a few of the 28 attacks since March have caused any injuries, according to base officials. But earlier this month, a well-placed mortar struck a base dining facility, seriously wounding two soldiers and injuring eight others. Saturday&#8217;s attack fell harmlessly into roadways on the base.

Just moments after the attack Moore and other members of the 1st Battalion, 210th Aviation Battalion, F Company assembled at their predetermined meeting point to start their unit checks.

Capt. Kevin Hickey said after every explosion his unit knows where to be, how to stay safe and how to stay focused even when they&#8217;re bored.

That doesn&#8217;t mean the unit didn&#8217;t take the attack seriously. Several soldiers showed up with frazzled faces and almost stood in formation until Hickey started calling their names.

But after a few minutes, everyone seemed to relax. Troops passed the time comparing notes, guessing how bad the damage was based on the sound and trying to identify which aircraft were scrambled by the lights in the sky.

Sgt. Jeremy Edwards biked to the 210th rally point from halfway across base, just in time to report that several unit members had safely ducked into a shelter near the air field.

Hickey&#8217;s check took less than 10 minutes, accounting for all of his men. A few minutes later, the all-clear siren sounded, scattering the unit back to their regular schedules.

Moore said he was headed back to bed.