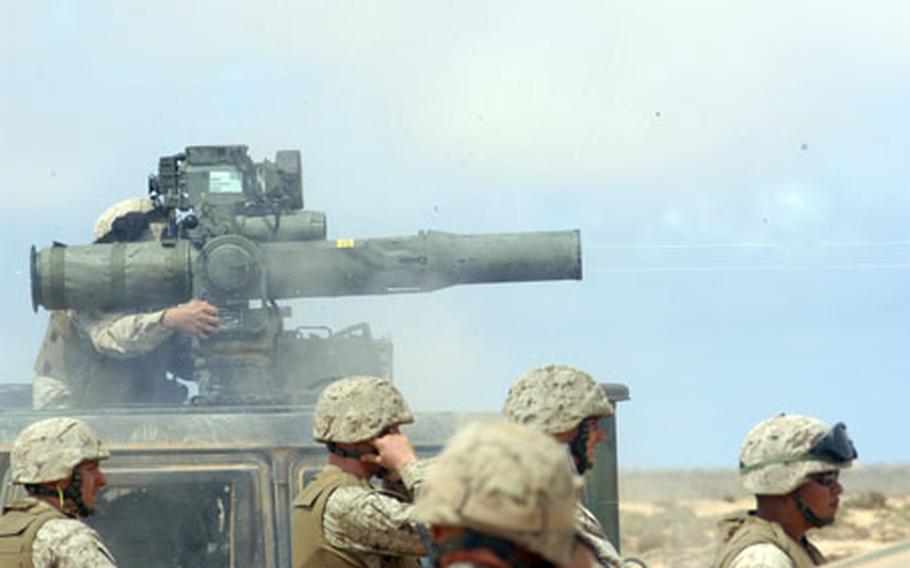 TAN-TAN, Morocco &#8212; For those driving to and from the Cap Draa training area, headquarters for African Lion 07, it was like being downrange in Iraq &#8212; or back home.

Donkey carts hauling goods, and men and women dressed in traditional garb and headwear, were like scenes from the countryside outside Fallujah, but without the bomb craters and nasty looks.

The rocky terrain and scrubby plants also looked like Twentynine Palms in the California desert, home of the largest Marine training base.

Electric motor scooters were the transportation of choice for many. There were more traffic circles than stoplights. Billboards were mostly in Arabic, some in French, and some both. Fruit and vegetable stands are common seen along the road.

The highway was two lanes, though it appeared contractors were trying to turn sections into a four-lane road. Police stopped motorists at numerous checkpoints.

Adapting to the shortcomingsMost of the gear for the exercise was flown into the commercial airport in Agadir, a resort town on the Atlantic coast, or shipped into Agadir&#8217;s port.

From there, it was driven in a convoy 200 miles south to Tan-Tan, with a stop in Guelmin where one of the medical humanitarian teams would be based.

Forty-two Marines from the Wilmington, N.C.-based 4th Landing Support Battalion were charged with getting the job done. It would be good practice because most were scheduled to deploy to Iraq in the coming weeks.

Naturally, there were bumps in the road. One of the Humvees broke down and needed to be tow-barred to another Humvee.

The problem was that the Humvee doing the towing really sucked the gas, and five-gallon fuel cans aboard that should&#8217;ve been filled weren&#8217;t.

So the Marines had to siphon gas from the broken-down Humvee into the tow vehicle.

&#8220;You have to adapt to and overcome the shortcomings. There&#8217;s the language barrier, and sometimes there&#8217;s not necessarily the right equipment to offload our equipment from the planes.&#8221;

Getting organized before the exerciseThe exercise wasn&#8217;t the only way U.S. and Moroccan officials bonded during African Lion 07.

Officials gathered for at least three major meetings in the past year between the Stuttgart, Germany-based U.S. Marine Corps Forces Europe and the Moroccan military, according to Gunnery Sgt. Jonathan Helm.

Helm, an anti-terrorism and force protection supervisor for the Marine command, said U.S. and Moroccan counterparts had to hash out all the details: the movement of troops, transport of supplies, coordination between Moroccan and U.S. boots on the ground to get things to where they were needed, and then back to the proper seaports and airports.

&#8220;Each person has their host person in the unit and establishes a relationship,&#8221; Helm said. &#8220;For example, I established a relationship with my counterpart in force protection.&#8221;

Logistics chiefs, operations and intelligence specialists were also among those joining together.