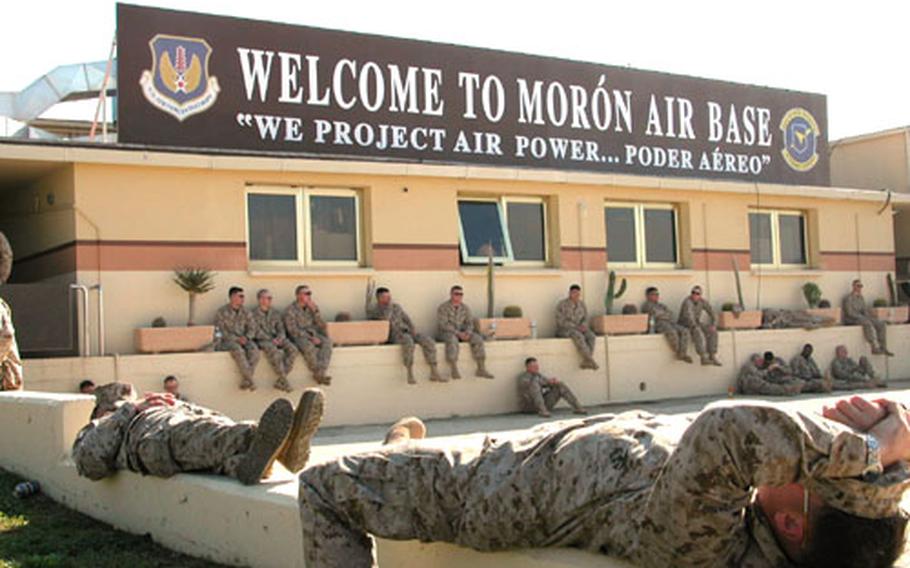 Members of Company K, 3rd Battalion, 2nd Marine Division from Camp Lejeune, N.C., try to relax on Feb. 4 after their eight-hour flight across the Atlantic. The Marines would leave for the east African nation of Djibouti in a few hours for duties there. (Charlie Coon / S&S)

Members of Company K, 3rd Battalion, 2nd Marine Division from Camp Lejeune, N.C., try to relax on Feb. 4 after their eight-hour flight across the Atlantic. The Marines would leave for the east African nation of Djibouti in a few hours for duties there. (Charlie Coon / S&S) 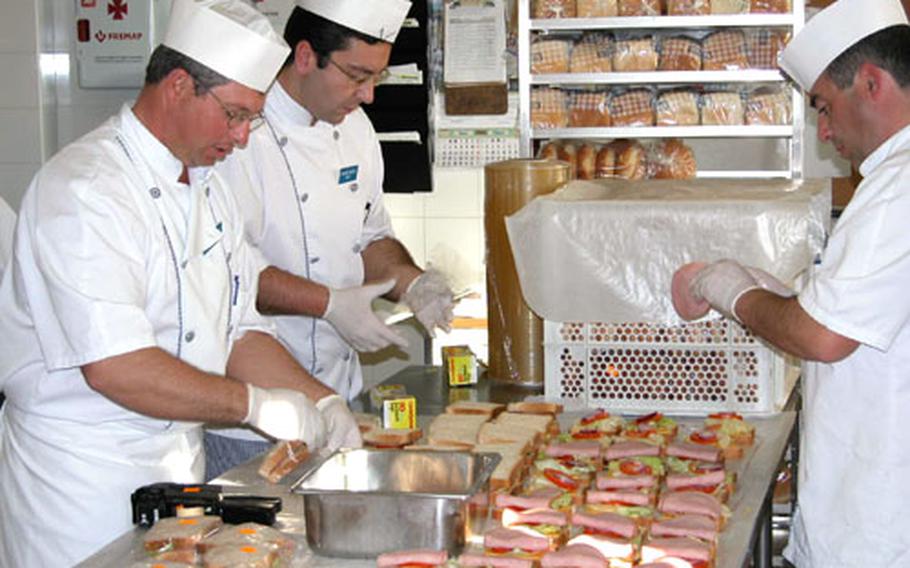 From left, Jose Luis Carrera, Fernando Montiel and Rafael Balle prepare box lunches for passengers at Morón Air Base, Spain. The Morón cafeteria, which prepares up to 800 box lunches per day for troops passing through, was named best in United States Air Forces, Europe, in the single-service category for the second year in a row. (Charlie Coon / S&S)

MOR&#211;N AIR BASE, Spain &#8212; The passengers are troops either in transit in the war against terrorism.

Some are going to Iraq, while others are going home. Halfway between is Mor&#243;n Air Base.

The staff has transformed offices into lounges and warehouses into dorms. Volunteers bake brownies and supply coffee. The cafeteria provides nearly 24-hour service.

They want to make Mor&#243;n a nice place to stay, if only for a little while.

Mor&#243;n was built in the 1950s to handle big, beefy bombers. It wasn&#8217;t built to handle passengers. But Mor&#243;n is halfway between the United States and Iraq and has become a pit stop for Operation Iraqi Freedom.

For the next few months, thousands of troops will be spending a few hours or a few days at Mor&#243;n.

Mor&#243;n is run by the 496th Air Base Squadron and has a permanent staff of about 120 airmen. It expanded by bringing in another 600 people &#8212; a melting pot of reservists, U.S. civilians and Spaniards &#8212; to help meet the demands made by Operation Iraqi Freedom.

For troops, the stop at Mor&#243;n usually means eight hours down and eight hours to go to get to their final destination. They don&#8217;t care who&#8217;s working, they just want some basic comforts.

The base recently installed portable showers. The cafeteria is open 22&#189; hours per day. (The other 1&#189; hours is for cleaning.) Bunk beds have been brought into warehouses.

Volunteers stock the waiting room with brownies, cookies and coffee. The library&#8217;s Internet cafe is open until midnight.

A layover at Mor&#243;n takes at least five hours. That&#8217;s how long it takes for the plane to be checked out, refueled and made ready for flight.

Sometimes something breaks or a part is not available and the layover lasts a day or two.

Mor&#243;n doesn&#8217;t have a selection of restaurants, stores and lodging like the bases at Ramstein, Germany, or Mildenhall, England.

&#8220;Expeditionary means bases can expand and contract based on the needs of the combatant commanders,&#8221; said Col. Ed Worley, the public affairs chief for U.S. Air Forces in Europe. &#8220;It gives us the flexibility we need with our operations.&#8221;

On Wednesday, Francisca Munoz Ojeda, a passenger services representative from nearby El Arahal, climbed the stairs and boarded a dark, cramped C-5 cargo jet. She climbed another ladder into a room where 51 Navy reservists were sitting.

They&#8217;d spent the last eight hours inside a plane. The plane was now resting on a runway in Spain. Still seated, they look at her.