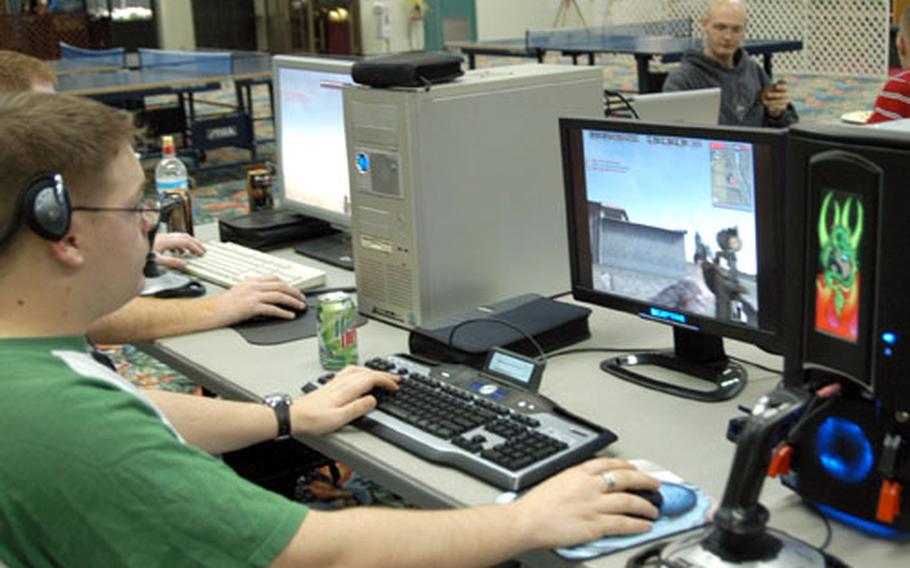 Members of the Computer Users Group of Yokota Air Base, Japan, who volunteer to take calls for the 225-RIDE, play some video games while waiting for requests from people who need rides home. (Bryce S. Dubee / S&S)

YOKOTA AIR BASE, Japan &#8212; More than 1,100 people at Yokota who may have had too much to drink have been kept off the roads and delivered home safely this year by volunteers from the 225-RIDE program, officials say.

But more volunteer drivers are needed.

The program, which operates on Friday and Saturday nights from 10 p.m. to 6 a.m., provides base residents a free, safe and confidential ride home simply by picking up the phone.

However, there might not always be someone on the other end to answer, explained Master Sgt. James Percy, a program coordinator who said it is sometimes &#8220;very difficult&#8221; to get enough volunteers.

&#8220;A lot of people think that the base cabs are the answer,&#8221; he said, adding that while the taxis are important, they only operate until 2 a.m. while some people are still out.

Some weekends, there are enough volunteers to cover both the 10 p.m. to 2 a.m. and the 2 a.m. to 6 a.m. shifts, which each need a minimum of five people to run smoothly &#8212; two per car and a dispatcher to answer the phone.

Tech. Sgt. Kevin Williams, also a coordinator, said anyone over 18 can volunteer.

Williams said some larger groups that volunteer even have parties, where they order a few pizzas, break out the playing cards and wait for the phone to ring.

Last Saturday, members of the Computer User&#8217;s Group of Yokota gathered at the Yujo Community Center to do just that.

Between heated matches of &#8220;Battlefield 1942&#8221;, card games and snack breaks, the volunteers stayed up until dawn, manning the phones and sending out teams to ensure people who needed a ride got one.

Having a 225-RIDE party &#8220;is a great way to combine gaming, a social gathering and keeping people from doing something stupid like drinking and driving,&#8221; said Senior Airman Robert Hopkins.

More than 1,100 people at Yokota Air Base who may have had too much to drink have been kept off the roads and delivered home safely this year by volunteers from the 225-RIDE program, officials say. But more volunteer drivers are needed.