More vets seek to add their voices in Congress 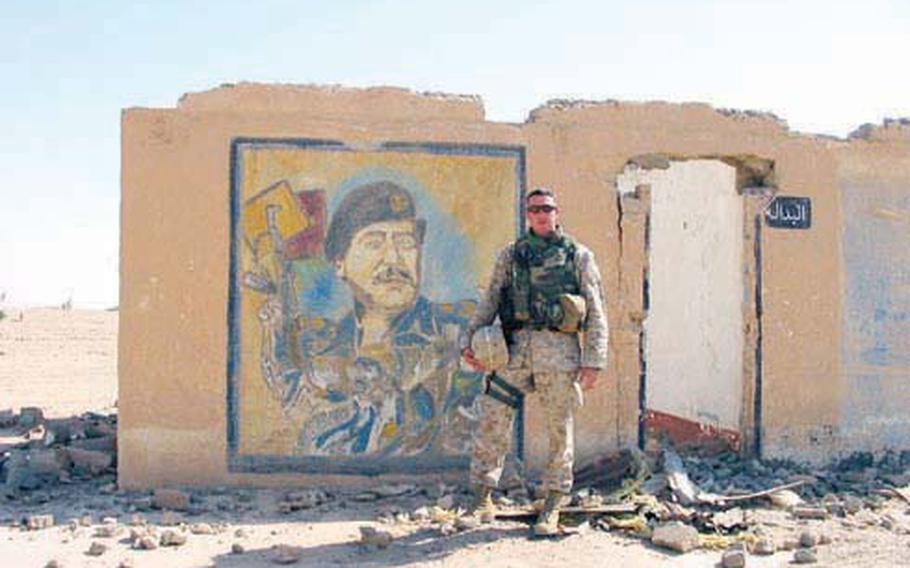 Marine Reserve Capt. Duncan D. Hunter poses next to a mural of Saddam Hussein in Fallujah in 2004. Hunter, a Republican candidate for Congress in California’s 52nd District, is one of 20 Iraq and Afghanistan veterans running for national office this year. (Courtesy of Duncan D. Hunter)

WASHINGTON &#8212; Congressional candidate Duncan D. Hunter says if lawmakers are going to set policy for troops in Iraq, they ought to have more members who know what it&#8217;s like to fight there.

"I&#8217;ve served two combat tours over there. I&#8217;m friends with men and women over there; I talk to them," the Marine reservist said. "I know what those guys need, and I think it&#8217;s important for people making the decisions to know what we&#8217;re talking about."

Pete Hegseth, chairman of the lobbying group Vets for Freedom, said he expects that number to continue to climb. His group is backing nine Republican candidates for office, including Hunter, on a platform of "supporting victory" in Iraq.

"I think what voters see with veterans is that they have an understanding beyond party politics," he said. "These guys have inherent leadership skills. And especially on issues like foreign policy, it helps to have a concept of decisions on the ground."

Still, that doesn&#8217;t mean it&#8217;s an easy transition to go from serving in Iraq to serving in Washington.

"Most people won&#8217;t say this, but being a war veteran is a huge disadvantage in these races," said Jon Soltz, founder of VoteVets. "They don&#8217;t have the donor connections. When you&#8217;re off fighting in a war, you don&#8217;t know the local fundraisers.

"But once they get elected, they play key roles in their parties in Washington. There&#8217;s a lot of credibility there."

Two years ago, most of the Iraq veteran candidates were Democrats, running on the out-of-Iraq platform of the national party.

Only Rep. Patrick Murphy, D-Pa., was successful in his bid, thanks in large part to financial backing from VoteVets.

This year, 13 Republicans, eight Democrats and one third-party candidate provide a wider range of views on overseas military operations, as well as other military and domestic issues.

But unlike in 2006, when Iraq was the dominant issue for voters, veteran candidates this year say they&#8217;re spending more time talking about the stock market than overseas terrorism.

"I think it&#8217;s important to have more people in office who have served in this conflict," said Democrat Ashwin Madia, a retired Marine running for Minnesota&#8217;s 3rd District House seat with help from VoteVets.

"But there&#8217;s no question that front and center in the campaign right now is how much are we going to keep spending overseas, and how can we better spend the money here."

Duane Sand, a naval reservist running as a Republican for North Dakota&#8217;s lone House seat, said he hasn&#8217;t made his service in the Persian Gulf a major point in his campaign, but it has taken an even lesser role recently.

"Iraq isn&#8217;t our No. 1 issue anymore, but it is an issue. But people right now want to hear about how to fix the economy."

Democrat John Boccieri, an Air Force Reserve major running for Ohio&#8217;s open 16th District House seat, said he has been tying domestic finances and irresponsible spending and Iraq throughout his campaign, so the change in focus hasn&#8217;t changed his message.

Hunter is vying for the seat being vacated by his father, former House Armed Services Committee chairman Duncan Hunter. Normally, his Marine Corps background would give him an advantage in California&#8217;s 52nd District because of San Diego&#8217;s high military population and defense industry.

But his opponent, Democrat Mike Lumpkin, is a fellow Iraq war veteran with 21 years in the Navy. In a contentious race that&#8217;s already put military issues like Iraq and GI Bill improvements at the forefront, the two have also taken cautious shots at each other&#8217;s military experience.

Hunter notes that while Lumpkin&#8217;s long service is commendable, he was not on the ground fighting in Fallujah. Hunter was.

Lumpkin said Hunter&#8217;s courage can&#8217;t be questioned, but notes that as a Navy SEAL commander, "I was doing counternarcotics work in Latin America when he was in middle school."

Regardless who wins, the contest ensures that at least one Iraq war veteran will be in Congress next year. Hegseth and Soltz said that&#8217;s a step in the right direction.