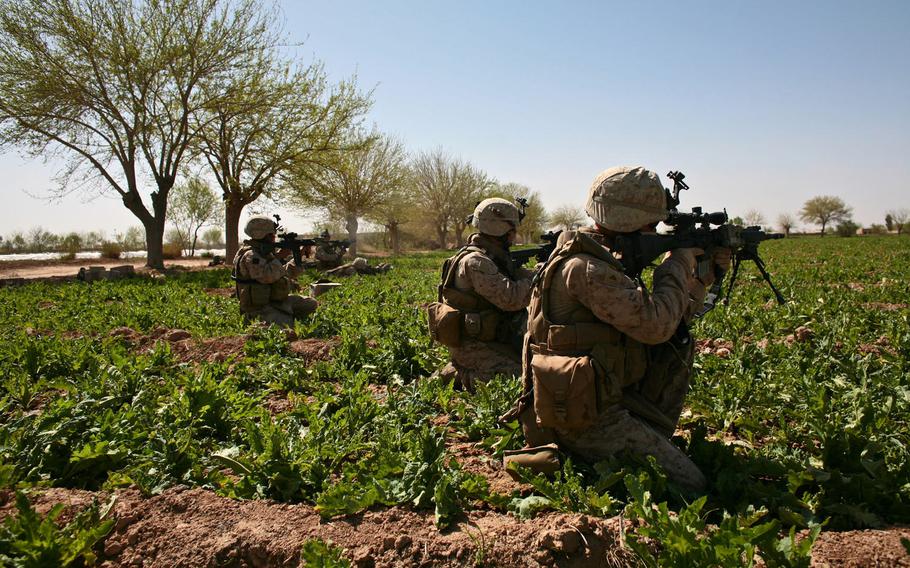 Buy Photo
Kneeling in a field of poppy in Marjah District of Helmand province, in southern Afghanistan, Marines return fire against a Taliban machine gun position in March 2010. The 2010 effort was supposed to be a model of counterinsurgency strategy, but six years later, U.S. forces were back in Marjah working with Afghan forces to recapture it yet again. (Stars and Stripes)

The two units are of comparable size, but the move also involves sending more advisers to work with Afghan units in the volatile province, the coalition’s top spokesman said in an interview at the coalition’s headquarters in Kabul.

In testimony to Congress last week and in interviews, the commander of U.S. and NATO forces in Afghanistan, Gen. John F. Campbell, has said the United States needs to do more to support Afghan forces.

A senior military official with the international coalition said the incoming unit was going to Helmand.

At a Pentagon briefing Thursday, Shoffner said the battalion's deployment would increase the number of coalition troops in the embattled province but not change the overall number of about 9,800 U.S. troops in Afghanistan.

The latest reinforcements highlight the seriousness of the military situation in Helmand, a historic support region for the Taliban where the insurgents have been on the attack since October. The fighting, which has left large parts of the countryside in Taliban hands, hasn’t let up even during the winter months, which in the past saw a sharp reduction in guerrilla activity. Afghanistan has seen a warmer than usual winter, which has allowed the Taliban to continue operations, Shoffner said Thursday.

The continuous fighting in the south will likely keep the majority of the 9,800 U.S. forces there for much of 2016, he said.

He would not say whether operations in Helmand would necessitate the United States to change its plan to draw down to 5,500 troops by the end of the year.

"Decisions will have to be made to get forces down to appropriate troop levels," Shoffner said.

Sangin, a major town and district in Helmand where dozens of British and U.S. soldiers died before most NATO combat troops were withdrawn in 2014, has been reported to be on the brink of falling to the Taliban. Government forces are said to be in control of just a few square miles of the city.

In January, a special operations forces servicemember was killed while working with Afghan forces to reclaim territory held by the Taliban in Helmand. Two other U.S. servicemembers were wounded in that operation.

As a result of the government losses in Helmand, the commander of the 215th Corps of the Afghan army — which has responsibility for Helmand — along with his four brigade commanders and many members of their staffs have been sacked and replaced in recent weeks.

They are among the 102 generals replaced by the Defense Ministry in the past two months following a Taliban offensive in the north in which the insurgents occupied the city of Kunduz for two weeks in September and October. It was the first major urban center to fall to the Taliban since the U.S. ousted the group from power in 2001.

Shoffner attributed the 215th Corps’ problems to the fact that its forces had been in combat without a break since the Taliban first launched their offensive in Helmand in October, although there have also been concerns about incompetence and corruption among the top leadership there.

He emphasized that the mission of the new U.S. troops and advisers remained the same — to train and assist the 215th Corps to boost its performance. He also said the troops would be based in other provinces of southern Afghanistan as well as in Helmand.

Shoffner said the changeover of battalions was part of a normal, planned rotation of units in Afghanistan.

The battalion-size unit would number roughly 700-800 troops, with many of those likely to be engaged in force-protection duties for the train, advise and assist teams.

Afghan authorities welcomed the announcement. “It is very important that the foreign forces are involved in helping the Afghan forces to improve security in Helmand,” said Omar Zwaak, spokesman for the provincial governor’s office.

Shoffner said Helmand and neighboring Kandahar provinces were a priority for the insurgents.

“The Taliban have always stated that their objective was Helmand and Kandahar,” Shoffner said. “We believe the operation in Kunduz was an effort to stretch the Afghan security forces.”