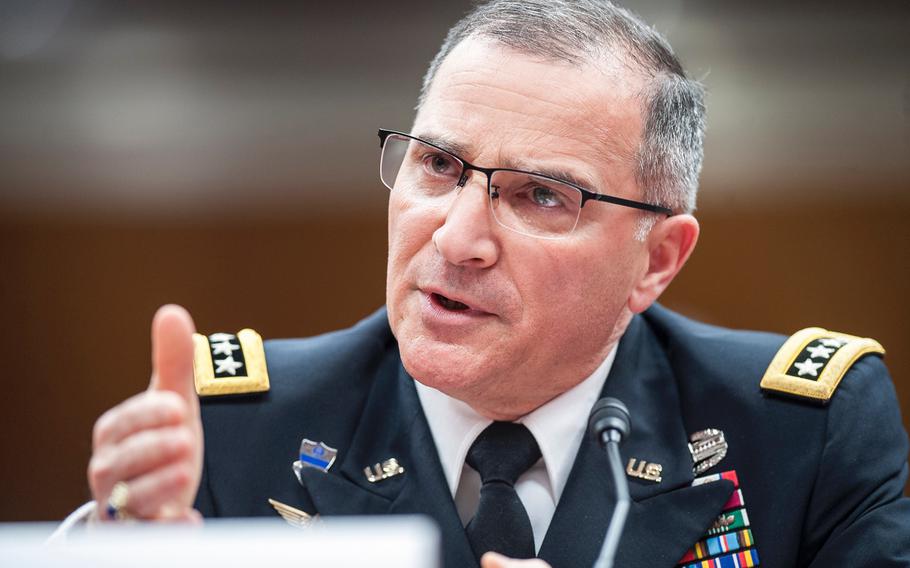 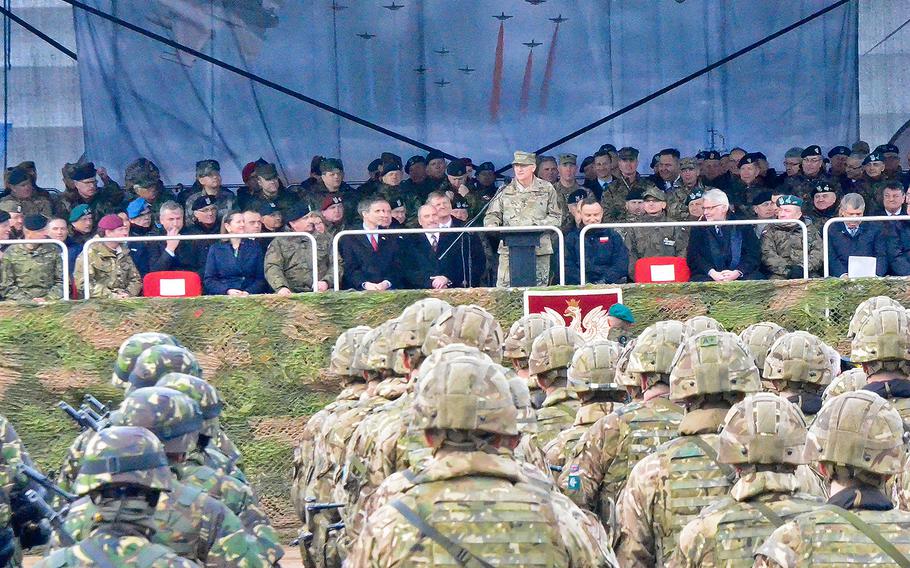 Gen. Curtis Scaparrotti, commander of European Command and Supreme Allied Commander in Europe, delivers a speech during a welcoming ceremony for soldiers from Battle Group Poland to kick off their deployment, April 13, 2017. (Charlene Moler/U.S. Army)

WASHINGTON — The United States should continue to support a robust conventional buildup in Eastern Europe to deter further Russian aggression there, panelists told an independent U.S. commission on Wednesday, just days ahead of President Donald Trump’s rollout of his 2018 budget.

“I would support deploying on a permanent basis an additional brigade combat team, armored,” said Michael Carpenter, a former deputy assistant secretary of defense for Ukraine and Russia under former President Barack Obama.

The Commission on Security and Cooperation in Europe includes Republicans and Democrats from the Senate and House and representatives from the Defense and State departments and has been in place for more than four decades to examine European security issues.

“Having armor especially on the eastern flank of the Baltic states would be a large deterrent for Russia, especially manned by Americans as opposed to the multinational brigades,” Carpenter, who was one of three experts on the panel, told the commission. “There is nothing that substitutes for American presence on the Eastern flank.”

Since Russia seized Crimea from Ukraine in 2014, the United States has steadily increased funds to support more military operations in Europe, including Army brigade rotations and stocks of equipment throughout the eastern part of the continent. It has also provided Ukraine with training and non-lethal weapons to help the country defend itself from further Russian incursion. Earlier this month, Congress passed the final portion of the 2017 budget, which included $3.4 billion for the European Reassurance Initiative.

“It is important that the administration and NATO continue the steps agreed at last year’s NATO summit at Warsaw to enhance the alliance’s conventional deterrence and defense capabilities in the Baltic region and Central Europe,” said Steven Pifer, a former U.S. ambassador to Ukraine who served under former presidents Bill Clinton and George W. Bush.

However, it is not clear how much funding Trump will seek for military operations in Europe in his 2018 budget. He has openly criticized NATO for relying too heavily on U.S. military power. The first budget of his presidency will be unveiled May 23.

Experts warned Wednesday that the additional support for Ukraine and maintaining a strong presence in Europe has not deterred Russia, so far. They said it has not led to Russian compliance with ceasefire agreements in Ukraine or stopped them from pursuing advanced weaponry that could threaten Europe, including new land-based cruise missiles that are in violation of the 1987 Intermediate Range Nuclear Forces Treaty.

“Until Russia feels there are consequences” to meeting the terms of the negotiated ceasefire agreement and others, it will continue to act in violation of them, Carpenter said.