More US base consolidations on the way in Europe 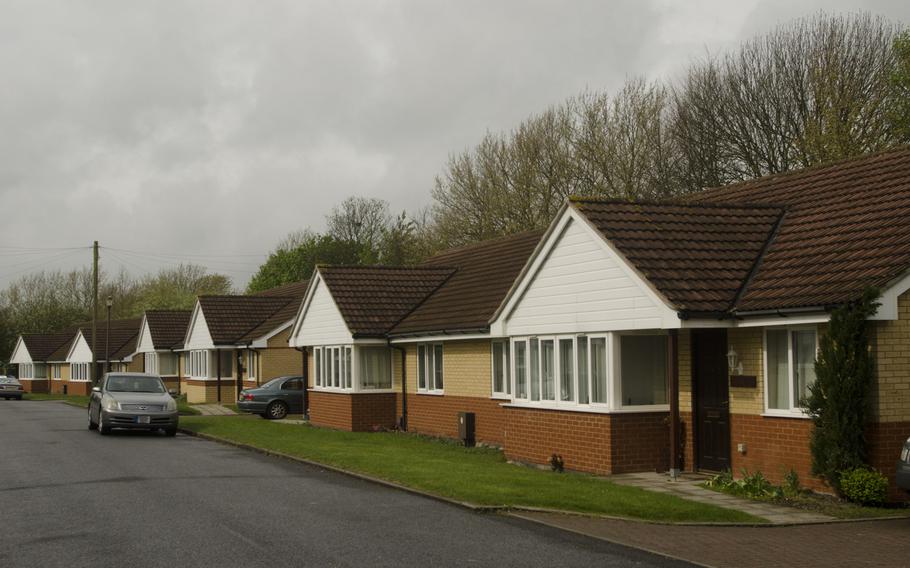 The Department of Defense would close RAF Alconbury, England, if given funding by Congress to build an intelligence center at RAF Croughton. Congress is waiting to fund the center until the European review of military bases is complete. (Adam L. Mathis/Stars and Stripes)

STUTTGART, Germany — Recommendations for more base closures and consolidations in Europe will be submitted to Defense Secretary Chuck Hagel in a matter of weeks as part of an ongoing effort to shed unneeded facilities on the Continent, according to the Defense Department.

Last month, the Pentagon announced it will close 21 outdated facilities in Europe — mainly housing and recreation complexes — for an annual savings of $60 million. But that is just the start, with the next round of closures expected to take aim at actual military installations as part of the European Infrastructure Consolidation review — a “BRAC-like” analysis launched more than a year ago.

The primary “capacity analysis,” which involves recommendations from each service on ways to consolidate in Europe, is expected to be on Hagel’s desk within two months, if not earlier, according to a Defense Department official.

The study, which began well before Russia’s recent intervention in Ukraine, comes at an awkward time for the military. On the one hand, the Pentagon wants to find efficiencies and demonstrate to Congress a willingness to downsize overseas. Lawmakers have long asserted that Europe bases should be cut before even discussing the possibility of unpopular base closures on U.S. soil. At the same time, Russia’s actions in Ukraine has complicated downsizing plans as the U.S. and its allies contend with what Gen. Philip Breedlove, the top U.S. commander in Europe, has called a new security paradigm on the Continent.

“The events in Ukraine have changed the assumptions underlying European security,” Breedlove, NATO’s supreme allied commander, said last month. “NATO must undergo a strategic adaptation to address Russia’s use of snap exercises, cyberactivities and covert operations to achieve their state objectives. With this fundamental change is our security environment, we must transform.”

Russia’s annexation of Crimea has been a source of particular angst in former Warsaw Pact states particularly in Poland, where leaders have indicated a desire for a permanent U.S. presence in the country. Breedlove said NATO shouldn’t rule out positioning forces in eastern Europe in an effort to realign alliance military power closer to potential hot spots.

However, a budget-challenged Pentagon is faced with the difficult, and perhaps contradictory, task of showing a renewed commitment to European security in the face of a more assertive Russia while simultaneously shrinking the size of its footprint in Europe.

John Deni, a professor at the U.S. Army War College and expert on the military mission in Europe, says the U.S. should be cautious about giving up too much real estate in connection with any base realignment.

“There might be some room for consolidation, but that needs to be weighed against the fact that we diminish our strategic flexibility,” Deni said. “Once we close a facility we are never getting it back and we have no way of predicting what future crises might be and where you need them. If there is room for consolidation it will be on the margins of what we have left.”

An increased reliance on rotational forces in Europe could be one way to offset a smaller permanent forward presence or reduced network of bases. On Tuesday, the White House annonced that President Barack Obama would seek $1 billion from Congress for a new “European Reassurance Initiative,” which would aim to increase troop rotations on the Continent and help train allies.

Meanwhile, it will likely be several months before final decisions on the base structure are announced publicly, given a bureaucratic process that involves coordination with respective host nations.

But there are already some indications of the direction DOD wants to go in areas of closure and consolidation. For instance, the department’s 2015 budget request includes funding for a new intelligence center at RAF Croughton, England — a move that would result in the closure of both RAF Alconbury and RAF Molesworth, according to budget documents. Those plans are on hold by Congress pending the conclusion of the Pentagon’s consolidation review.

Others areas likely to be scrutinized are Army bases in Germany, which still account for most of the military footprint in Europe. Two garrisons — one in Schweinfurt and one in Bamberg — are already slated to close in the coming year. The U.S. Army’s Baumholder garrison, which over the years has frequently been mentioned as a place for potential closure, could get a second look.

But while much remains unknown about the future base map in Europe, advocates for a strong forward presence in Europe say recent Russian aggression should be an argument against sweeping cuts and closures.

“For those that think we’ve cut enough from Europe, the timing is obviously helpful,” Deni said.“It makes sense to really take stock of where we are with the remaining force structure and infrastructure, but in the past, I think a lot of this has been budget-driven and not strategy-driven. I think this (crisis with Russia) reminds us we’re still going to retain a strategic interest in Europe.”