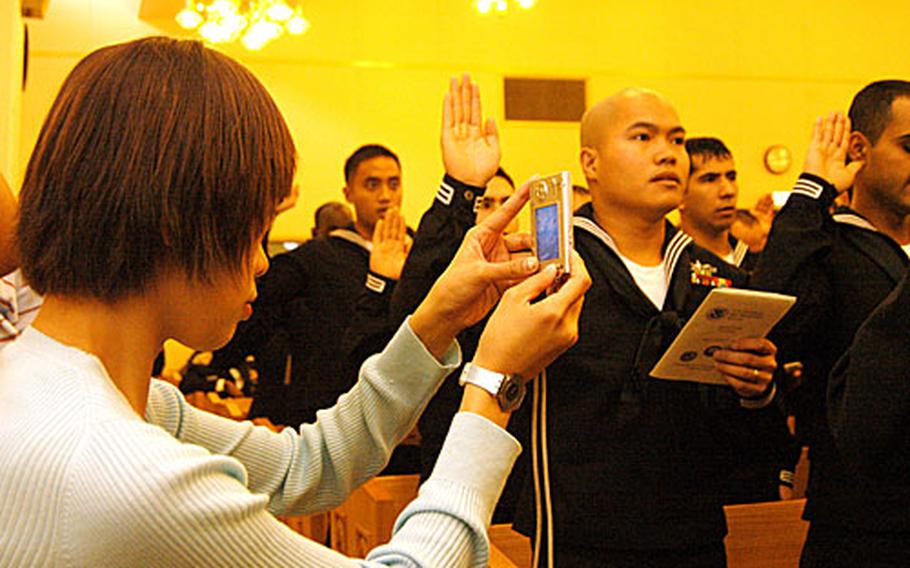 More and more non-citizen military members are taking advantage of the expedited, no cost naturalization process, according to U.S. Citizenship and Immigration Services. Friday&#39;s ceremony -- with 121 servicemembers from 34 countries -- was the biggest ceremony held to date at Yokosuka Naval Base. (Allison Batdorff / S&S)

More and more non-citizen military members are taking advantage of the expedited, no cost naturalization process, according to U.S. Citizenship and Immigration Services. Friday&#39;s ceremony -- with 121 servicemembers from 34 countries -- was the biggest ceremony held to date at Yokosuka Naval Base. (Allison Batdorff / S&S) 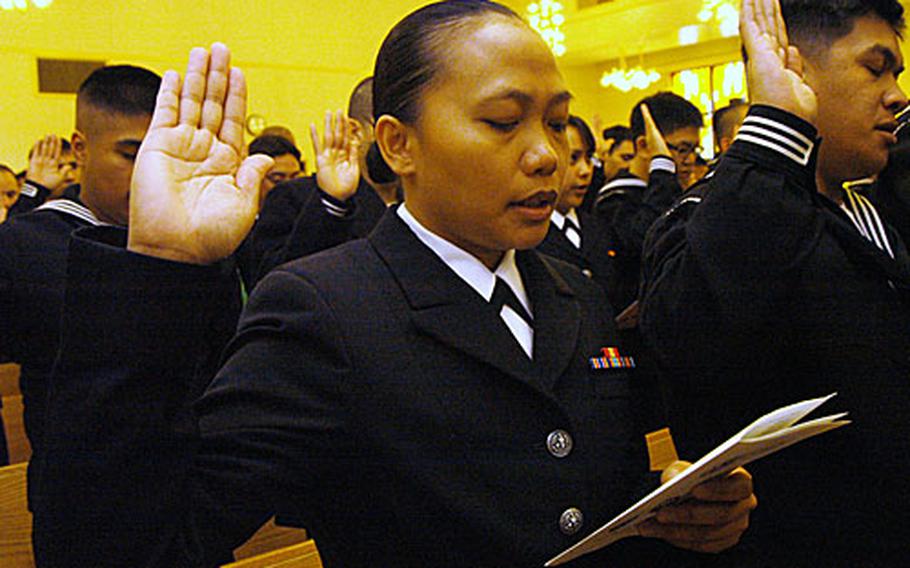 YOKOSUKA NAVAL BASE, Japan &#8212; Adjan Adhikari called Nepal on his cellular phone Friday to tell his buddies the big news.

After joining the Navy, he became eligible for fast-track naturalization under a 2002 executive order that expedites the process for active-duty military during &#8220;periods of conflict.&#8221; President Bush declared the time after Sept. 11, 2001, as a period of conflict.

While non-citizens can serve in the U.S. military, they can&#8217;t hold certain jobs. Citizenship was the only way for Adhikari to get a security clearance &#8212; the first step toward his dream of working for one of the U.S. intelligence agencies, he said.

Getting a security clearance is one of the most popular reasons why people apply, said Petty Officer 1st Class Tracey Dikes. Citizenship applications take up 75 percent of her work load as a legalman aboard the Kitty Hawk, she said.

Currently about 500 non-citizens work on the aircraft carrier, she said.

Dikes had more than 50 sailors at Friday&#8217;s overseas naturalization ceremony at Yokosuka Naval Base. A total of 121 servicemembers representing 34 different countries took the oath, making it the largest ceremony in the region to date.

A 2004 change allows the oath of allegiance to be administered at overseas military installations and made the entire process free, she said.

&#8220;Each group seems to be getting bigger,&#8221; said Jose Olivares, South Korea-based officer-in-charge attache to the U.S. Citizenship and Immigration Services. &#8220;We definitely want to get the word out.&#8221;

Servicemembers qualify by filling out three forms and demonstrating good moral character, English language skills, knowledge of U.S. history and government and loyalty by taking the oath. In some cases, they also must be a permanent U.S. resident and have served honorably in the military for at least a year.

The biggest boon to citizenship is the VA benefits, Olivares said.

According to the Immigration Services Web site, more than 26,000 troops have become U.S. citizens through the program, but more than 40,000 others are eligible.

Possible reason why someone wouldn&#8217;t choose citizenship is to return to their home country and buy property, said Petty Officer 1st Class Carlo Garcia. He became an American on Friday after a dozen years in the Navy because of the benefit to his family, he said.