More than letters cut in stone 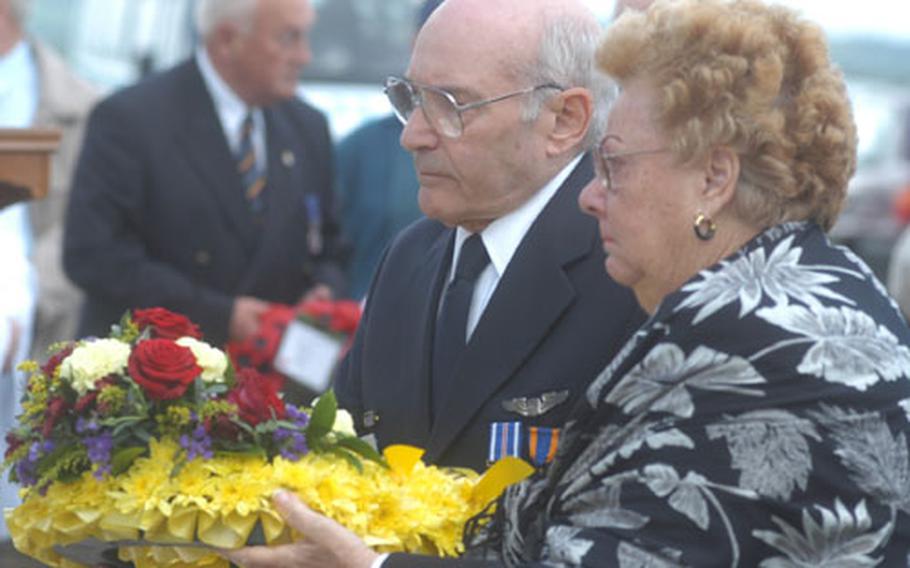 Bill Lyons, president of the 355th Fighter Group Association, and Theresa Angileri, sister of a pilot who died while with the unit in World War II, prepare to lay a wreath during a service Saturday at the unit&#39;s wartiime base in Steeple Morden, England. (Ron Jensen / S&S)

When the the flag was pulled away during a memorial service Saturday morning, Theresa Angileri couldn&#8217;t look.

The names were those of men who served at the airfield in Steeple Morden during World War II, but never returned. One of them &#8212; Lt. M.E. Graczyk &#8212; was her brother.

Graczyk, whose first name was Michael, died at 19 in August 1944. On his way back from a mission in his P-51 Mustang, he was told to strafe a German troop train. He was missing in action for one year, before being declared killed in action.

The names were unveiled along with those of more than 140 British, Canadian and New Zealand airmen who also died while serving at Steeple Morden. The ceremony was attended by more than 200 people, including several British dignitaries and many local townspeople and their children.

For several in attendance, the names &#8212; chiseled on a monument at the farm field where the base once stood &#8212; are more than letters cut in stone. They look at the names and they see faces: friends and comrades in arms, husbands and fathers.

She described Graczyk as very protective of her. If she said anything remotely off-color, she said, he would reprimand her.

He was a smart kid and charming, president of his high school graduating class. But he could be mischievious, too, and would charm his way out of trouble.

Once on a family outing, the two saw a man offering rides in a biplane for $5. Graczyk bought one and was hooked. He later enlisted so he could learn to fly.

Another name on the wall belongs to Capt. Howard Lambert. Glenn Severy was the crew chief for Lambert&#8217;s aircraft.

Lambert had confidence in Severy. He knew his Mustang would be in top condition. Severy appreciated that show of respect from an officer.

Severy waited and waited for Lambert to return. Night fell, and he gathered lights and flares to help Lambert when he landed. He couldn&#8217;t believe the pilot would not be coming back. But he never did.

Others attending the Saturday service had similar feelings when discussing pilots whose names are now on the monument.

Moseley, 84, of Dotham, Ala., described Lt. C.R. Barger as thoughtful and always appreciative of the effort the crews put into his airplane.

After Barger&#8217;s death, Moseley was told the pilot had willed to him his uniform wings, which he had left behind. He is now trying to find Barger&#8217;s family members so he can give them the wings.

Coleman couldn&#8217;t remember the names of the other pilots.

It was sad when they didn&#8217;t come back, but his heartbreak was less.

When men died, as was inevitable in war, Galer simply went on about his business.

During the service, the Prayer of Remembrance was read. It includes these words: &#8220;They shall not grow old as we that are left grow old.&#8221;

At a reception after the ceremony in a hut that was once a base ready room, food and drinks were served. Photos from the 355th&#8217;s time at Steeple Morden were displayed along one wall, and old men pointed at them and remembered those times, when they were young and there were no names on a memorial.

Most said they will not return to Steeple Morden. They are too old. The distance is too great.

But the names will remain, silently telling the story of the airfield and the sacrifice made long ago by men so young.

With the party in full swing, Angileri slipped away.

She walked alone 100 yards back to the monument, where she stood motionless and stared at the names, one in particular.