More than just a little shake 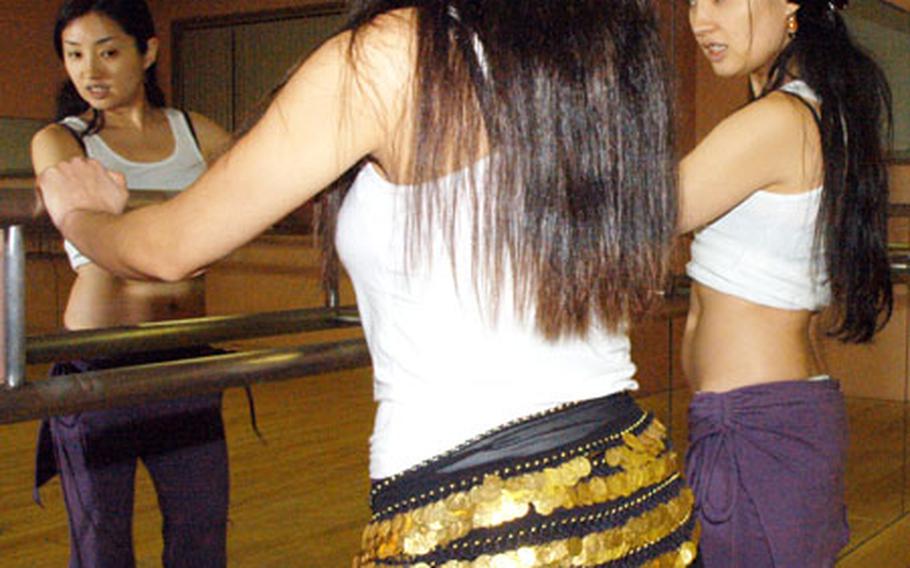 The "shimmy" is the most challenging move for a student who wanted some extra instruction from teacher Hiromi Yamanaka. (Allison Batdorff / S&S)

The "shimmy" is the most challenging move for a student who wanted some extra instruction from teacher Hiromi Yamanaka. (Allison Batdorff / S&S) I knew I was in trouble when my belly dancing teacher told me I was going to hurt myself before we had even finished stretching.

We had just &#8220;drawn the sun into earth.&#8221; It&#8217;s supposed to be a fluid arm stretch, but I was a short-circuiting robot compared to graceful instructor Hiromi Yamanaka and her two lithe students. So much for thinking having a belly automatically qualified me for belly dancing.

The class, given Wednesdays at Yokosuka Naval Base&#8217;s Community Center, follows the trend of inventive ways to tighten and shape our jiggly parts. A recent trip through the exercise DVDs at the Navy Exchange yielded a plethora of choices, including going to boot camp with an unrealistically clean and chipper blonde and learning to striptease with Carmen Electra.

But contrary to popular opinion, belly dancing was not invented as a sexy strategy to seduce a Sultan &#8212; it started as a way for women to strengthen their abdominal muscles in preparation for labor and giving birth. Today, it&#8217;s a way to &#8220;shape muscles not often used in daily life,&#8221; Yamanaka said.

&#8220;It gives you a thinner waist and raises your hips,&#8221; Yamanaka said. It isn&#8217;t considered a high-impact exercise and therefore is a way for older women or those with injuries to become stronger, she said.

But make no mistake &#8212; belly dancing is strenuous. Moves like &#8220;the vertical figure eight&#8221; are carefully choreographed to where each muscle must be in the right place and undulating the right way &#8212; otherwise you can hurt yourself, Yamanaka said.

It isn&#8217;t just shaking what your mamma gave ya, either. The slow, deceptively subtle moves are often a function of foot placement and tightening and releasing the abdomen while simultaneously moving the arms in careful, snakelike motions. Even the famous &#8220;shimmy&#8221; &#8212; the high-speed jiggle where all the coins on the hip scarf quake &#8212; comes from moving the backs of the thighs.

The shimmy gives 24-year old student Michelle Heath the most trouble, she said, but she&#8217;s still there every Wednesday.

Now Heath has her own hip scarf &#8212; one of several belly dancing accoutrements like the coin bra, long skirts, veils, finger cymbals and the canes used in various dances &#8212; and now performs with Yamanaka at Arabian restaurant Al Ain in Yokohama once a month.

Isolating the stomach from the shoulders and hips is a challenge for Navy spouse Keiko Wyche. But she has stayed with it for over a year because she feels really good afterward, she said.

As for me, it was my first lesson and I had trouble with just about everything. I&#8217;m as graceful as an elephant on roller skates, but I gave it a shot. Heath even let me borrow her hip scarf, upping the ante. My moves were herkey-jerky at best, but I enjoyed myself immensely and imagined I was making progress. My gut was sore the next day, but I found myself practicing secret &#8220;hip slides&#8221; on the train and scored a personal victory by not knocking anyone over.

Belly dancing has been taught for a few years at Yokosuka and is considered a &#8220;popular way to work out,&#8221; said Community Center Manager Tracy Willis.

And though she doesn&#8217;t get into the religious aspects in class, there is a spiritual component to belly dancing, Yamanaka said.

&#8220;Belly dancing was the dance of the Goddess, and the path to finding the Goddess within,&#8221; Yamanaka said.

Classes cost $15 and are held every Wednesday at 6 p.m.