More than 74 years after his B-24 Liberator was shot down, a US airman is coming home 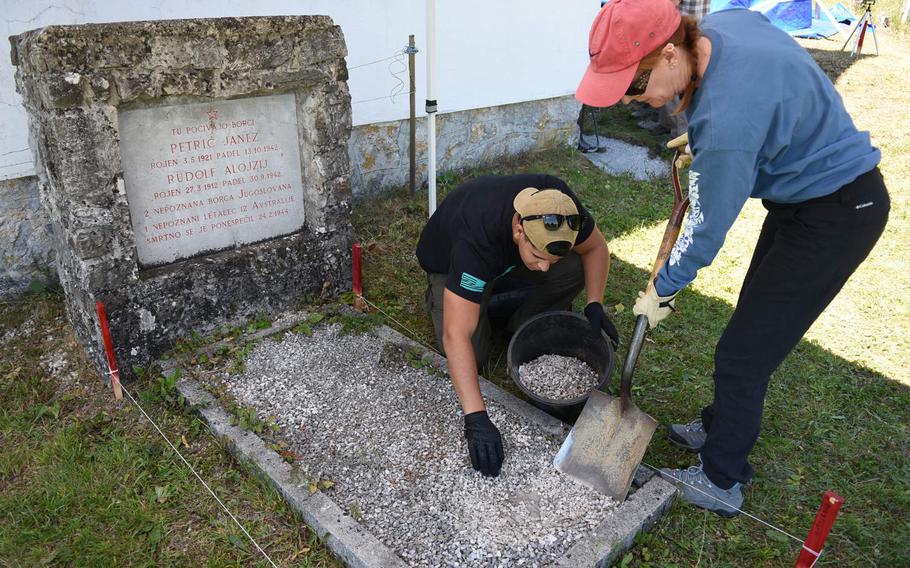 Buy Photo
Joan Baker, an anthropologist, and Marine Corps Cpl. Julian Temblador remove small stones from the top of a grave next to a church in Pokojisce, Slovenia, on July 17, 2017. A team representing the Defense POW/MIA Accounting Agency conducted a mission in Slovenia in July to search for the remains of Sgt. Alfonso Duran, an airman missing since World War II. (Jennifer H. Svan/Stars and Stripes)

KAISERSLAUTERN, Germany – More than 74 years after his B-24 Liberator was shot down over the former Yugoslavia in World War II, Army Air Forces Sgt. Alfonso O. Duran is coming home.

Duran’s family in the United States learned late last month that remains recovered by a U.S. government team last summer next to a church in the Slovenian countryside were identified as their relative.

Pat Duran, who pressured the Defense Department to recover her uncle’s remains after efforts ground to a halt, said the news was bittersweet for her and her family.

“We cried and reminded each other of the efforts we made to move this along, and how often we despaired of ever seeing this moment, but it came,” Pat Duran said. “Of course, there is still a certain degree of sadness that he was lost so young and that his parents and siblings were never able to have closure.”

The Defense POW/MIA Accounting Agency said Duran’s remains were formally accounted for on May 22.

On the final day of Operation Argument, Duran’s aircraft was flying in a formation from Gioia del Colle Italy, to bomb a German aircraft factory in Regensburg when it came under attack by German fighters and anti-aircraft fire.

The tail gunner in another aircraft witnessed a direct hit on Duran’s aircraft, which tore off a section of the right wing, according to DPAA. The aircraft plunged into a steep dive and passed out of sight.

The crash site was reported to be located near present-day Ljubljana, Slovenia, an area then under enemy control.

The trail went cold for more than 70 years. Pat Duran, who was born 10 years after Duran went missing, grew up with the idea her uncle “was lost somewhere and he’ll never be found,” she said last summer.

Then, in 2006, Slovenian researchers provided information about a B-24 Liberator that crashed on Feb. 25, 1944, near Pokojisce – a small village in the mountains not far from the capital city of Ljubljana – and mentioned the grave of an airman.

Investigators with the Defense POW/Missing Personnel Office, a predecessor of DPAA, conducted field research missions and concluded in 2012 that the remains of an airman buried behind the church in Pokojisce were likely those of Duran.

But the search stalled, slowed in part by a major reorganization at the time of the POW/MIA command. Pat Duran contacted her senator and with help from Renata Gutnik, a Slovenian military researcher who first told Duran of her uncle’s possible whereabouts, DPAA secured permits to do an excavation last summer by the village church.

It was an intense campaign “to get the recovery process started,” Pat Duran said, “and we nearly gave up a few times, but once the Army committed to the recovery, it seemed to go fairly fast.”

In July, the DPAA team began digging where researchers were told an airman’s remains were moved in the 1960s to a common grave marked by a large headstone. But after two days, the team unearthed only dirt and rocks.

A tip from a local, however, led the team to the airman’s original burial site by the church, where members soon found possible human remains.

DPAA in a statement did not elaborate on how they were able to identify Duran’s remains. The identification process can sometimes take years.

“My understanding is that they were able to make a definitive identification through the DNA samples sent in by family members,” Pat Duran said.

Pat Duran said her uncle’s remains will likely be interred in a cemetery in Santa Fe, New Mexico, near where he grew up.

Duran’s name is recorded on the Tables of the Missing at the Florence American Cemetery in Impruneta, Italy, along with other servicemembers missing-in-action from World War II. A rosette marker will be placed next to his name to indicate he has been accounted for, DPAA said.

Both DPAA and Pat Duran expressed gratitude for the numerous agencies and individuals that assisted in the recovery effort.

“We are so grateful to everyone who contributed to his return, the DPAA, Renata, the Slovenian government officials, and the villagers that tried to protect his remains,” Pat Duran said of her uncle. “We wish we could thank every last one of them personally.”