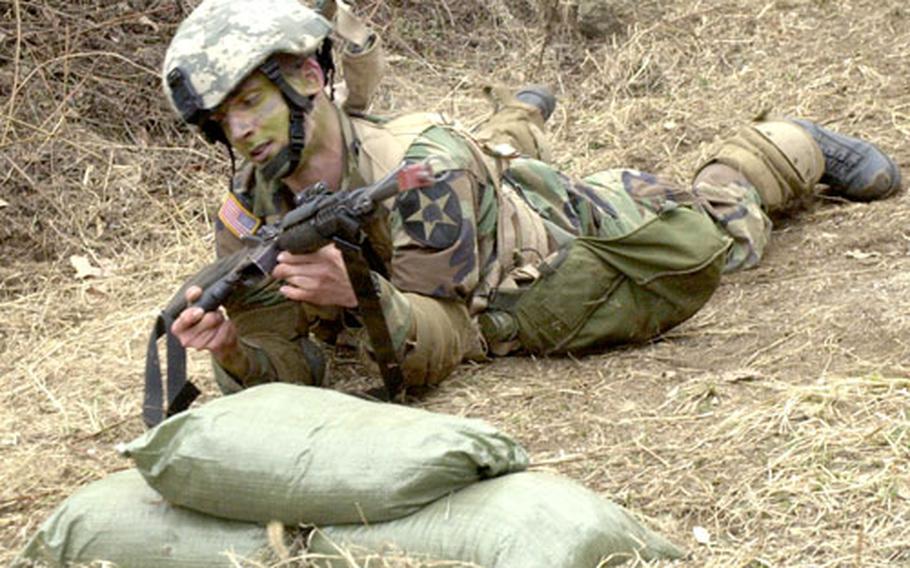 Pfc. Kristopher Williams crawls in the dirt during training for the Expert Infantryman’s Badge at Camp Casey on Thursday. (Erik Slavin / S&S)

Pfc. Kristopher Williams crawls in the dirt during training for the Expert Infantryman’s Badge at Camp Casey on Thursday. (Erik Slavin / S&S) 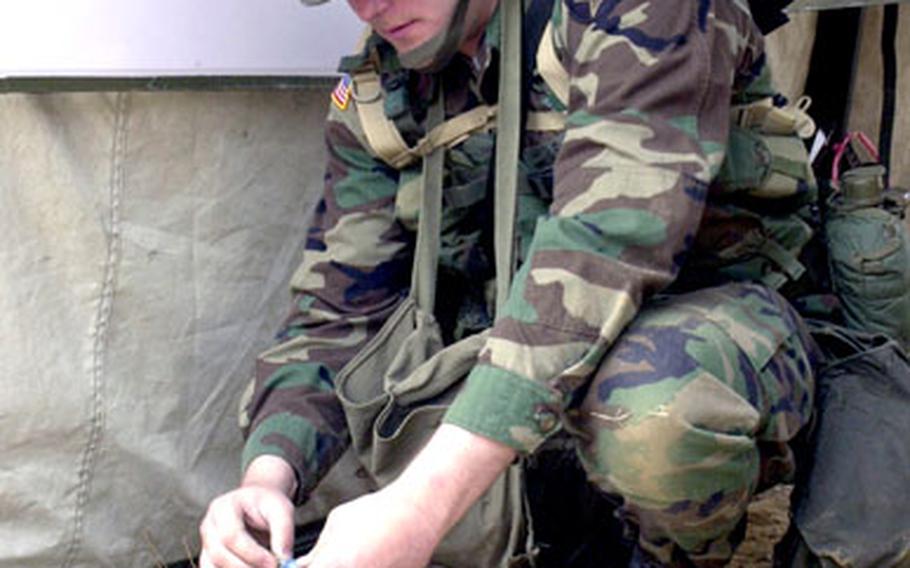 Pfc. James Bayer tests and arms a claymore mine during training for the Expert Infantryman’s Badge at Camp Casey, South Korea, on Thursday. More than 300 soldiers will test for the coveted badge next week. (Erik Slavin / S&S) 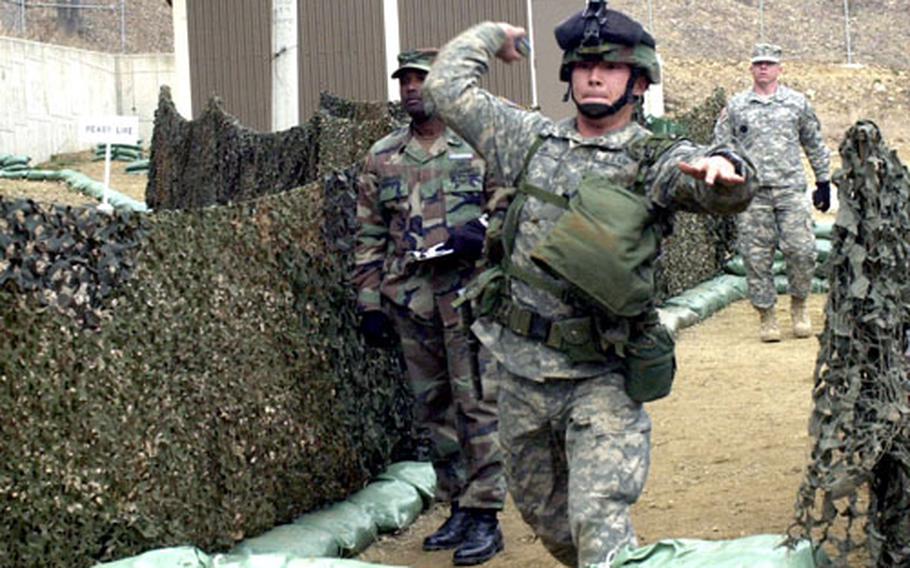 Sgt. Jae W. Kim throws a grenade at a target in a hole 20 meters away during training for the Expert Infantryman’s Badge at Camp Casey on Thursday. (Erik Slavin / S&S)

Completing these tasks earns an Army infantryman nothing except a place at the starting line in a quest to gain a rare honor: the Expert Infantryman&#8217;s Badge.

Last week, 346 soldiers converged on Camp Casey from around the Korean peninsula to train for this week&#8217;s test, which includes 27 stations.

They require quick thinking and reaction in a variety of tasks, including shooting, rendering first aid and mine deactivation.

If the past is an indicator, most will fail. Pass rates vary wildly annually, and some classes pass fewer than 20 percent of their participants.

However, almost half of the class passed last year and Command Sgt. Major Jason Silsby hopes that number will be higher this year.

Many of the tasks, like checking weapons and assembling a radio, are skills many infantrymen already have. It&#8217;s the speed and number of tasks they must accomplish in a short time that causes some to miss steps, say non-commissioned officers running the stations.

The course stations are well spaced and training aids are readily available, which not all EIB test grounds have, Silsby said.

Soldiers are allowed two &#8220;no-gos,&#8221; or failures to complete a task. They are allowed to retry the task later if they fail. However, if they fail the same task again, then better luck next year.

Soldiers&#8217; answers varied on which stations were most challenging, but most say the hand grenade test is toughest.

Soldiers receive five grenades. They must lob one into an underground bunker, land another in a hole about 20 yards away and one more in a tape-ringed area from 35 yards out.

The tricky part is where the grenade might go when it rolls, said Pfc. Eric Wright, of 1st Battalion, 72nd Armor Regiment&#8217;s Bravo Company.

That extra practice is especially important for tasks that soldiers may not normally do in their daily jobs, course NCOs said.