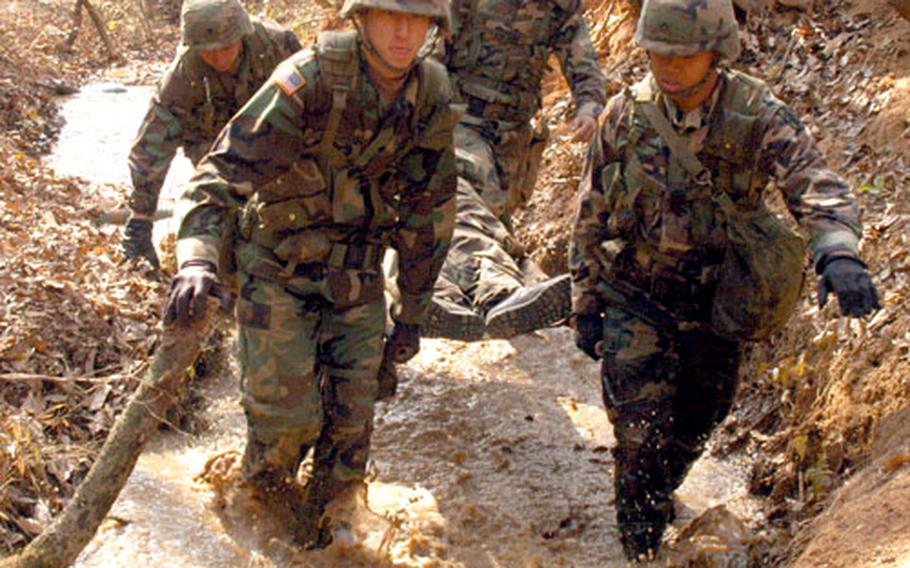 Soldiers carry a "casualty" through a flooded trench Wednesday at Warrior Base. (Seth Robson / S&S)

Soldiers carry a "casualty" through a flooded trench Wednesday at Warrior Base. (Seth Robson / S&S) Soldiers shield a "casualty" from simulated incoming fire Wednesday on the obstacle course at Warrior Base. (Seth Robson / S&S) 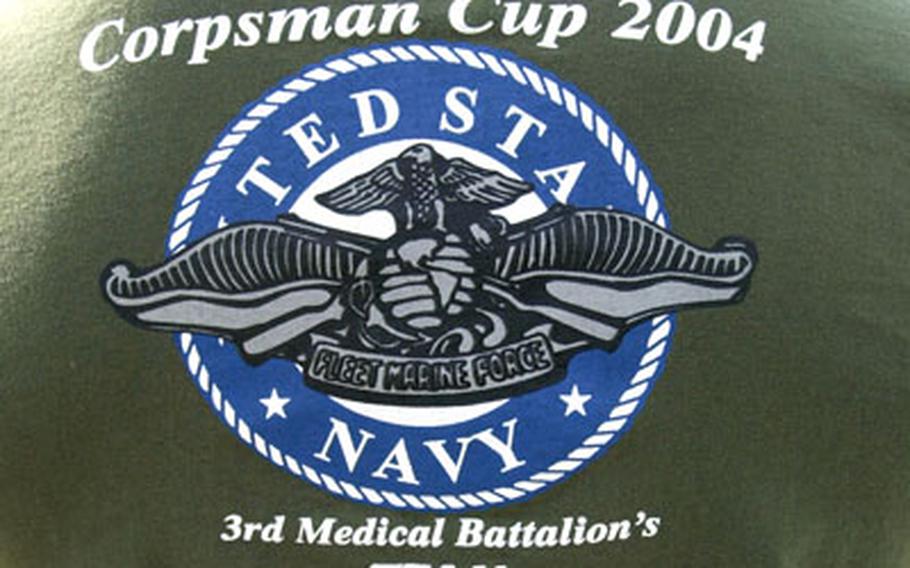 The team from 3rd Medical Battalion prepared this shirt prior to the 12th Annual Battle Skills Competition on Okinawa over the last week. By placing first in five of the seven events, the team followed through on its promise printed at the bottom: "Your mistake was made when you entered this competition against us, now you will pay and suffer the consequences." (Seth Robson / S&S) 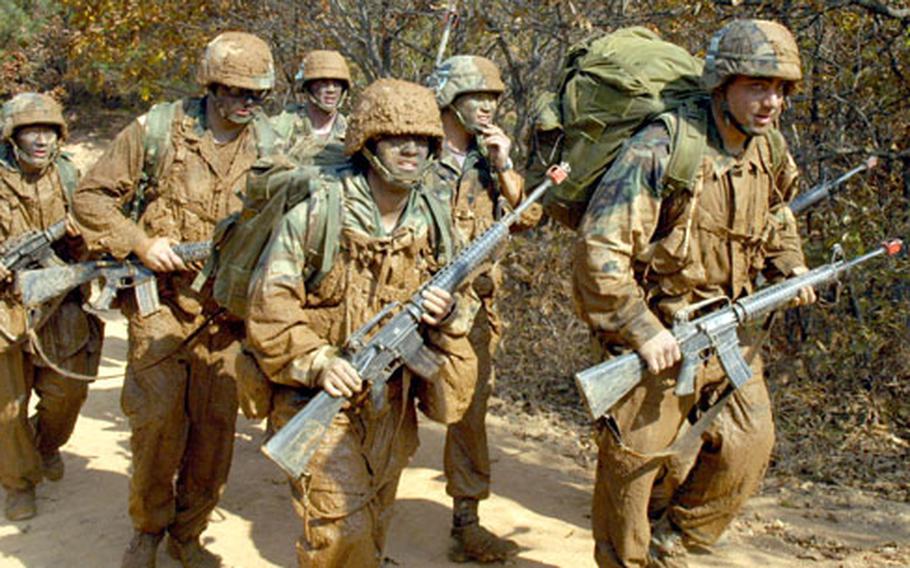 Candidates for the Expert Field Medical Badges emerge from the obstacle course at Warrior Base, South Korea. (Seth Robson / S&S) Soldiers emerge from the barbed wire obstacle at Warrior Base, South Korea. The obstacle is one of many that must be negotiated by stretcher teams composed of candidates attempting to qualify for their Expert Field Medical Badges. (Seth Robson / S&S)

WARRIOR BASE, South Korea &#8212; The blood and the sounds of war are fake, but the mud is real at Warrior Base, where more than 200 soldiers were competing for the coveted Expert Field Medical Badge (EFMB) last week.

Soldiers seeking the badge, which signifies the wearer is an elite U.S. Army field medic, spent the previous week training at Warrior Base, next door to the Joint Security Area, the most sensitive point on the Demilitarized Zone.

Last week, the soldiers&#8217; field medic skills were being tested to determine who would qualify for the badge. The testing, which includes a 100-question written exam and a 12-mile road march, puts soldiers through several assessment &#8220;lanes,&#8221; each focused on a particular skill set.

To add realism, casualty role players are splattered with fake blood while supervisors set off smoke canisters and simulated explosives. Loudspeakers in the forest play the soundtrack to the opening scene from the movie &#8220;Saving Private Ryan&#8221; &#8212; in which U.S. troops storm the beach at Normandy under a hail of fire &#8212; to simulate the sound of battle.

In one assessment lane, soldiers start at a tent containing medical equipment including scissors, stethoscopes, tape, catheters and bandages. The soldiers fill their aid bag, then head into the woods to find their &#8220;casualties.&#8221; Each casualty has simulated injuries such as a sucking chest wound, abdominal wounds, a head injury or shock.

The medics must assess and treat the patients&#8217; injuries, insert an intravenous catheter and fill in a field medical card, all within a set time limit and following the correct procedures. After that, they supervise the loading of three casualties into an M-113 Armored Personnel Carrier. Again the procedure is timed and must be done in the correct sequence.

&#8220;Candidates have to load the casualties in priority by injury &#8212; minimum, delayed and immediate,&#8221; said 168th Medical Battalion Staff Sgt. Eddie Sweatman, 45, who supervised the lane.

One candidate undergoing assessment Wednesday &#8212; 1st Battalion, 72nd Armored Regiment medic Spc. John Childs, 20, of Pasadena, Calif. &#8212; said the process is exhausting. &#8220;You do two lanes a day, except on the land navigation day, which involves day and night runs,&#8221; he said.

Before coming to Warrior Base last week, Childs tried to forget everything he knew about medicine, he said.

The distractions thrown at soldiers during the assessment didn&#8217;t faze the young soldier.

Another lane tests soldiers&#8217; common skill tasks, including camouflage, disassembling and assembling M-16 and M-4 rifles and M-9 pistols, and working with protective NBC (nuclear, biological and chemical) equipment. During this lane, soldiers run through the forest completing tasks in set time periods, all the while distracted by such things as simulated incoming artillery fire and snipers.

The soldiers demonstrated techniques such as the low crawl, the high crawl, carrying wounded soldiers and clearing a malfunction on an M-16 rifle. Moore said carrying the soldiers was exhausting. The candidates had to carry soldiers using different techniques, she said. &#8220;Dragging a soldier is the hardest because it is just dead weight,&#8221; she said.

Moore &#8212; who worked as a trainer with football teams from Northeastern University, Massachusetts Institute of Technology and the Harvard University Wrestling team before joining the Army &#8212; said field medicine has much in common with sports medicine.

One of the most physically demanding lanes involves four-man teams carrying a casualty on a litter over an obstacle course that includes trenches, a low wall, a narrow passage and a barbed-wire obstacle.

Greene said the course is designed to mimic the way a casualty would be evacuated on a litter during battle.

&#8220;Throughout the entire obstacle course there are eight obstacles. Teams must negotiate six of them to pass. If a member of the team drops the litter the other members of the team are not penalized,&#8221; he said.

Teams take about half an hour to complete the 1,500-foot course. The trench obstacle is, by far, the most challenging, he added.

As one litter team approached the trench on Wednesday, one member made a reconnaissance run along its length to check for enemy soldiers or booby traps. The trench, which runs uphill, was full of water and mud, making the task of carrying the stretcher even trickier. By the time they reached the top, the litter bearers were mud-splattered.

There was worse to come at the barbed-wire obstacle, where the whole team had to get down on their bellies in a pool of mud and crawl along dragging the litter and their patient, inch by inch under the wire. By the time they emerged, the soldiers were covered from head to toe in brown slime.

After they finish the obstacle course, teams march off to wash up and prepare for the next grueling day of assessment.

One of the soldiers supervising the EFMB assessment, Capt. Brendan Watson, 36, of Decatur, Ga., successfully competed for the badge himself a few years ago and knows how tough it is to win.