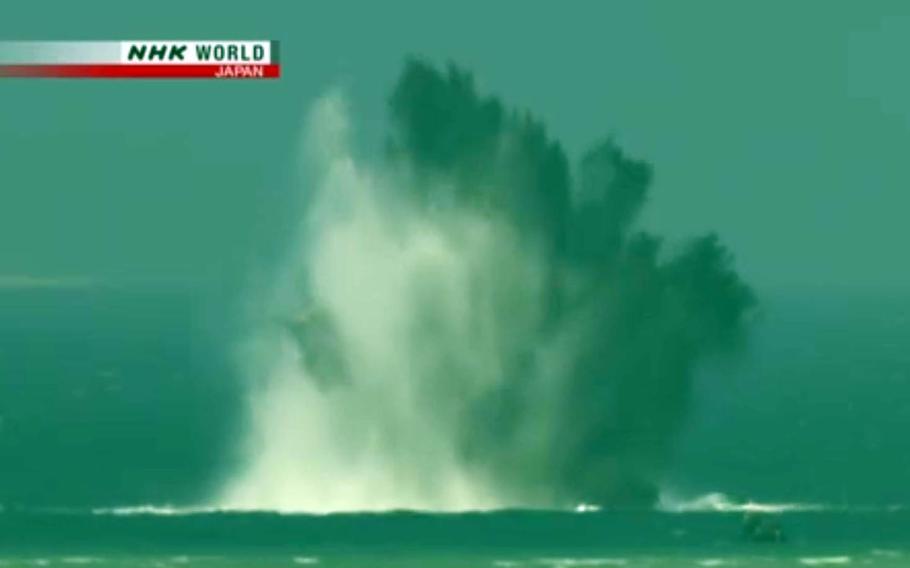 This screenshot from Japanese broadcaster NHK shows more than 100 World War II-era shells being disposed of during a controlled explosion in waters off Naha, Okinawa, Thursday, Sept. 28, 2017. (Screenshot from NHK)

CAMP FOSTER, Okinawa — More than 100 shells from World War II were disposed of during a controlled explosion Thursday in waters off Okinawa’s Naha Airport.

The 103 American-made 81mm mortar and 40mm field-artillery shells were found in the harbor last spring by metal detectors during shore-protection work for Naha’s port, a city spokesman said. It is believed to be the largest amount of wartime shells ever disposed of at one time on Okinawa.

“The disposal was conducted without any trouble,” the spokesman said.

The shells, which had been moved about 3 kilometers offshore of the airport’s runway, were detonated by the Japan Maritime Self-Defense Force at about 11 a.m., the spokesman said. The surrounding area was off limits for approximately three hours.

Finding unexploded ordnance isn’t uncommon for the island prefecture. The Battle of Okinawa, which happened in the spring and summer months of 1945, is known in Japan as the Typhoon of Steel because of the sheer ferocity of the fighting and the number of munitions expended.

On Sept. 23, a 110-pound bomb was neutralized near a Naha street popular with tourists. There have been other controlled underwater explosions of dozens of other munitions in recent years.

Nearly 2,000 tons of unexploded munitions have been recovered and detonated by the nation’s self-defense forces since the island prefecture was returned to Japan in 1972, according to the 15th Brigade Okinawa of Ground Self-Defense Force. That number does not include those disposed of by American forces before 1972.