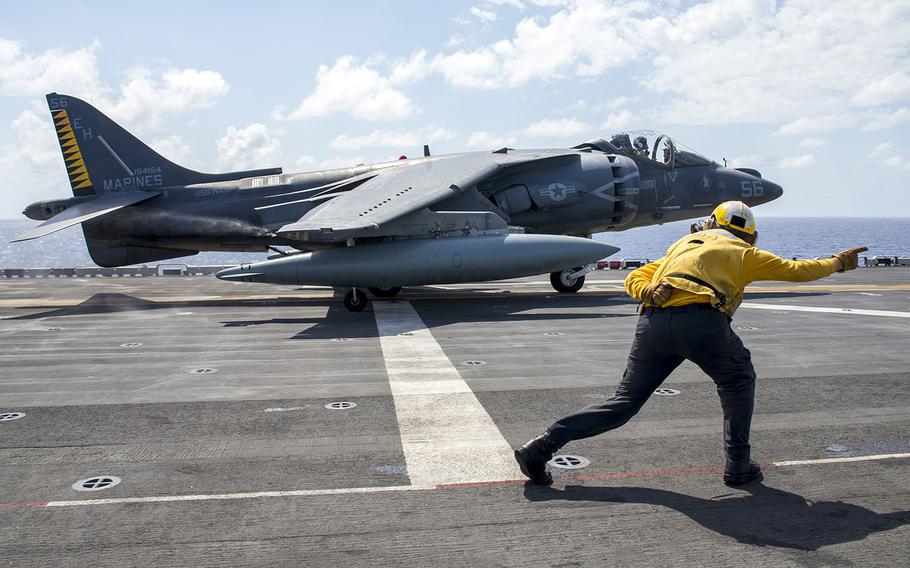 In an Aug. 24, 2016 file photo, an AV-8B Harrier from the 22nd Marine Expeditionary Unit takes off from the flight deck of the amphibious assault ship USS Wasp. The 22nd MEU is conducting precision air strikes in support of the Libyan Government of National Accord-aligned forces against Islamic State targets in Sirte, Libya, as part of Operation Odyssey Lightning. (Michael Molina/U.S. Navy)

STUTTGART, Germany — In the past month, the U.S. military has launched more than 100 airstrikes against Islamic State targets in Libya. On Monday, U.S. Africa Command conducted five strikes against various militant fighting positions in the Libyan coastal city of Sirte, bringing the number of strikes in August to 104, AFRICOM said in a statement.

The campaign, dubbed Operating Odyssey Lighting, aims to assist forces aligned with the Libyan Government of National Accord, who are in the midst of an offensive to push Islamic State fighters from their stronghold in Sirte.

“U.S. precision airstrikes have enabled GNA-aligned forces to advance and retake key areas of the city from the grasp of the Islamic State,” Lt. Cmdr. Anthony Falvo, an AFRICOM spokesman, said Wednesday.

As a result, the U.S. airstrikes working in tandem with Libyan ground forces have curtailed the Islamic State group’s ability to use heavy weapons and vehicle-born roadside bombs, Falvo said.

AFRICOM declined to speculate on how long the campaign might continue.

On Aug. 1, AFRICOM began its operation, which has mainly involved airstrikes by jets operating from the USS Wasp positioned off the Libyan coast, as well as occasional assaults from Marine attack helicopters providing close air support to Libyan ground forces.

For months, the U.S. had been weighing whether to assume a more aggressive role in Libya, a failed state where during the past year Islamic State fighters have sought to stake out a foothold.

Since the fall of Libyan strongman Moammar Gadhafi in 2011, Libya has been roiled by fighting among rival rebel groups and government forces, all vying for control of the country. The Islamic State group has sought to take advantage of the chaos and resulting security vacuum.

The decision to conduct airstrikes comes in response to a request from Libya’s Government of National Accord, a fragile coalition struggling to assert control in Sirte and other parts of the country.

Last week, in a sign of the closer partnership between Libya and AFRICOM, Libyan Prime Minister Fayez Sarraj visited the command’s headquarters in Stuttgart for talks with AFRICOM chief Gen. Thomas Waldhauser on counterterrorism operations and the government’s “desire for U.S. assistance with future enhanced military capabilities and defense capacity building.” Even before the latest U.S. operations, Libya forces had been making steady progress against Islamic State forces.

In July, Gen. Joseph Dunford, chairman of the Joint Chiefs, said during a stop in Stuttgart that only several hundred fighters remained in Sirte, though it is unclear what the current status of the Islamic State force is in that city. Earlier this year, recently retired Gen. David Rodriguez, former AFRICOM boss, said the total number operating in all of Libya was about 5,000. More recent estimates have put the number at perhaps 2,000.