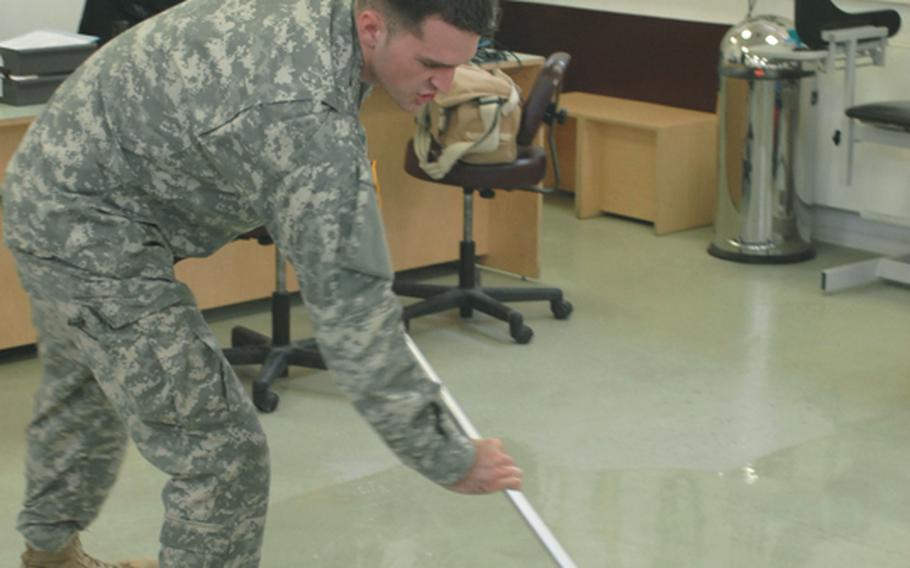 Buy Photo
Spc. Joshua Sandlin with the Wiesbaden Soldier Medical Readiness Center in Wiesbaden, Germany, takes time from helping customers to mop the office floors Thursday. Installation Management Command-Europe is hoping to save $2 million annually by eliminating cleaning contracts for units that are smaller than a brigade. (Mark Patton/Stars and Stripes)

Until now, local civilian contractors had provided services such as taking out trash, sweeping offices, mopping hallways and cleaning bathrooms at most buildings on Army bases in Europe. But IMCOM-Europe has started a new policy that eliminates cleaning services for office buildings that are occupied by units below a brigade level and reduces contracts for other buildings in a move officials say they hope will save $2 million annually.

Some soldiers say the cleaners will be missed.

&ldquo;I think it&rsquo;s better to have the cleaners, so the soldiers can focus on deployment and training,&rdquo; said Staff Sgt. David Schwartz with the 557th Medical Company in Wiesbaden. &ldquo;The soldiers need to be focused on training, and I gotta send them to clean the bathrooms. Sometimes it&rsquo;s a morale killer.&rdquo;

U.S. Army Garrison Wiesbaden had 29 cleaning contracts completely cut, most of them on the airfield.

&ldquo;Cleaning is part of everyone&rsquo;s life. However, there are more important things we can do,&rdquo; said Spc. Ciara Hayes-Kelly with the Wiesbaden Soldier Medical Readiness Center.

IMCOM-Europe spokesman Tom Saunders said the directive to review contracts came from IMCOM headquarters in Virginia. IMCOM officials there declined to be interviewed for the article.

&ldquo;The bigger issue is being better stewards of the taxpayer dollar,&rdquo; Saunders said. &ldquo;We have to look at how we spend our money so we can better support our garrisons.&rdquo;

Saunders said he remembered cleaning when he was in the military.

&ldquo;I&rsquo;m an old NCO and I remember we always cleaned together,&rdquo; he said. &ldquo;Sometimes at the end of the day when you sat around with your enlisted buddies, you got some good laughs out of it.&rdquo;

Some seasoned soldiers don&rsquo;t see what the fuss is all about.

&ldquo;From basic training on, (cleaning is) the first thing we&rsquo;re taught&hellip;whether making those hospital corners on our bunks or scrubbing the star chamber on an M-16,&rdquo; said Sgt. 1st Class Vido Barina, a signals intelligence analyst who trains new soldiers at Goodfellow Air Force Base in San Angelo, Texas. &ldquo;Cleaning is something we&rsquo;re known for.&rdquo;

Sgt. Anthony Yount with the 1st Armored Division in Wiesbaden said the changes don&rsquo;t affect his office too much.

&ldquo;If you&rsquo;re expected to go to combat, you should at least be able to maintain an office,&rdquo; he said.