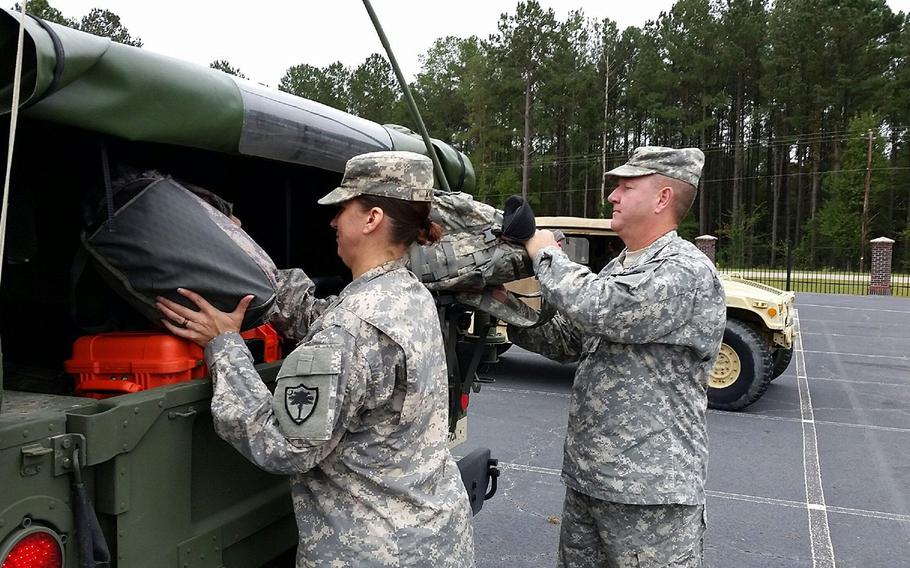 WASHINGTON – Military installations along the U.S. southeast coast evacuated non-essential personnel and equipment as troops were mobilized to respond to Hurricane Matthew that barreled toward Florida on Thursday after killing nearly 300 people in the Caribbean.

Some 4,500 National Guardsmen in Florida, Georgia and South Carolina were assisting mandatory evacuation orders in coastal counties ahead of the storm that National Hurricane Center officials feared could strengthen Thursday before it impacted eastern Florida.

Matthew is now a Category 4 storm, which means it has sustained winds of more than 131 mph, and could be the most powerful hurricane to hit eastern Florida in decades.

The Miami-based National Hurricane Center issued hurricane warnings for northeast Florida and southeastern Georgia on Thursday, where military officials announced non-essential personnel had been dismissed and training activities were halted. The storm’s expected path would bring hurricane conditions into Georgia and the eastern parts of the Carolinas on Friday into Saturday.

In Georgia, Naval Submarine Base Kings Bay evacuated non-essential personnel. The Army’s Fort Stewart, about 30 miles inland near Savannah, suspended all training activities and released its civilian employees from work Thursday until the storm has passed, officials said.

A statement to media late Thursday said Fort Stewart will implement base closure at 6 a.m. Friday and remain closed until 6 a.m. Sunday. Most on-post services will be halted or curtailed during the closure period, the statement said.

Among personnel evacuated were the 6,000 recruits training at Parris Island, said Capt. Greg Carroll, a Marine spokesman at the island basic training post.

Aircraft and warships were also moved from the storm’s projected path.

The Navy moved aircraft Thursday morning from Naval Station Jacksonville in northeast Florida, according to a statement. The service had previously deployed the USS Anzio, the USS Montgomery and the USS Iwo Jima from Naval Station Mayport near Jacksonville, Fla., to avoid the storm. Warships weather such storms better at sea then in port, a Navy official said.

National Guard activated Florida Gov. Rick Scott has activated 2,500 Army and Air Force Guardsmen to assist with evacuations and respond once the storm has hit, he announced Thursday morning. Another 4,000 National Guard troops remained on alert in Florida.

The Defense Department was also preparing staging centers for any necessary federal government response at three installations, said Army Maj. Jamie Davis, a Pentagon spokesman. Personnel and supplies will be staged at Marine Corps Logistics Base Albany in Georgia, Fort Bragg in North Carolina and North Air Force Auxiliary Field in South Carolina in the case of a federal emergency.

Haiti response mobilized Meanwhile, as many as 200 servicemembers were deployed to Haiti to assist relief operations after Hurricane Matthew battered that Caribbean nation.

Adm. Kurt W. Tidd, the chief of U.S. Southern Command, said a group of 100 soldiers and Marines and nine helicopters were expected to arrive Thursday in Port-au-Prince where they would conduct surveillance flights. A small group of Southern Command personnel arrived Wednesday in the Haitian capital to prepare for operations to support the U.S. Agency for International Development at Haiti’s request.

The storm has killed at least 283 people in Haiti, according to the country's Interior Ministry, a total that could grow as rescue workers reach isolated areas of the island. Tidd said Hurricane Matthew downed trees and power lines and left bridges and roads impassable. He hoped the task force would begin surveillance operations as soon as Thursday.

“We think we’ve got a pretty good idea of what’s going to be requested, and we think we’ll have the right parts in place to respond,” Tidd told reporters at the Pentagon on Wednesday evening.

In the Caribbean, the Navy pre-staged several ships and helicopters to provide relief if necessary, but those assets remained in a holding pattern Wednesday. Tidd said there use had not been requested as of Wednesday evening.

The Navy deployed the USS George Washington, an aircraft carrier, the USS Mesa Verde, an amphibious transport dock ship, and USNS Comfort, a hospital ship, to assist with the response.

Guantanamo avoids disaster Airfield operations were expected to begin Thursday at U.S. Naval Station Guantanamo in Cuba, according to a Navy statement. The only American base in the Caribbean, which houses a law-of-war prison that contains 61 detainees, was largely spared the devastation Matthew unleashed in other areas the storm hit. No injuries or major damage were reported, Tidd said. The roughly 700 non-essential personnel and family members who were evacuated ahead of the storm were expected to return to Guantanamo early next week, he added.

Hurricane Matthew was blamed for at least 113 deaths in Haiti, Cuba and the Bahamas since Tuesday, according to news reports. On Thursday morning, storm winds exceeded 140 mph, and it was expected to drag along the entire eastern Florida coast through Friday morning, according to National Hurricane Center projections.