More military families may save on school-lunch costs 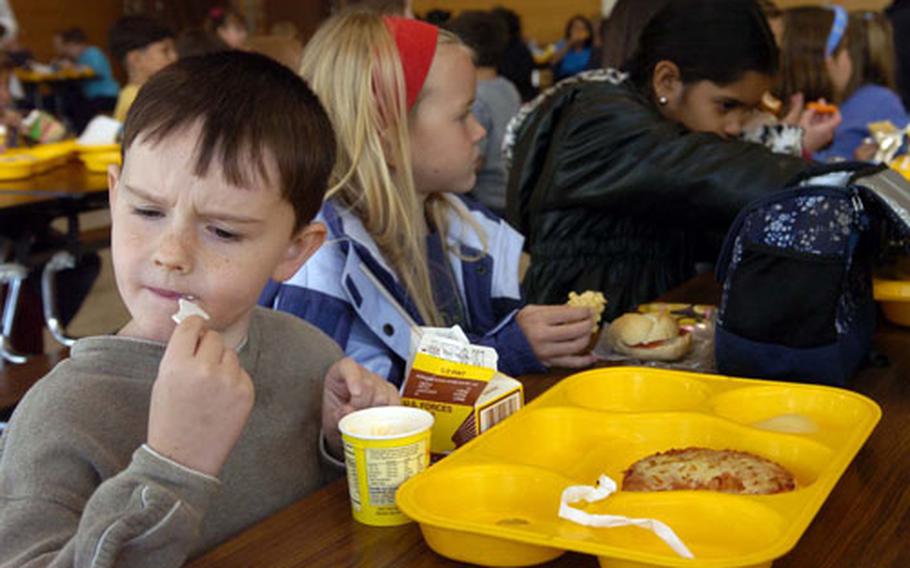 Children enjoy their lunch Friday at Darmstadt Elementary School in Germany. Under new guidelines released by the U.S. Department of Agriculture, more families, though not necessarily these students, may be eligible for the Free and Reduced Lunch program. (Raymond T. Conway / S&S)

A change this week in eligibility requirements for free- and reduced-priced school lunches means more military families will be eligible for the program. But officials aren&#8217;t expecting a huge influx in families coming forward to claim the benefit.

The U.S. Department of Agriculture, responsible for setting criteria and management of all public school free- and reduced-lunch programs, has excluded the Family Supplemental Subsistence Allowance, or FSSA, as countable income when determining eligibility, officials said.

But not many servicemembers were collecting the FSSA to begin with.

The FSSA is a Defense Department program started in May 2001 aimed at getting military families off food stamp programs.

In fiscal 2003, only 647 members of the military&#8217;s roughly 1.4 million active-duty force collected the FSSA, according to Pentagon figures.

The number of military people on food stamps had steadily declined over the years. In 1991, there were 19,400 servicemembers on food stamps, or nine-tenths of 1 percent of the force. In 2002, the number was 2,084 members on food stamps. The decrease was primarily due to the increases in basic pay and housing allowances, and to a lesser extent to FSSA started a year earlier, Pentagon spokeswoman Lt. Col. Ellen Krenke said.

The FSSA is a voluntary, nontaxable monthly supplemental allowance, not to exceed $500 a month. Eligibility is based on base pay, household size and housing allowances.

&#8220;This will benefit the military families most in need,&#8221; Bohannon said in a statement. &#8220;Coupled with the Basic Allowance for Housing exclusion from earlier in the year, this greatly increases the number of families who qualify for the program and saves them more than $300 a year per child.&#8221;

In general, about 19 percent of the AAFES-provided lunches are free, and 20 percent are sold at the reduced price, said AAFES-Europe spokeswoman Debbie Byerly. In May, the system provided 80,012 free lunches and 139,724 reduced lunches.

The formula for figuring out who is eligible can get complicated, so parents are advised to meet with the school liaison officer to determine if they&#8217;re eligible, said Dianne Burrough, the liaison officer at Naples High School, Italy.